Christian Brothers College, Cork (CBC Cork) is a fee-paying Catholic school under the trusteeship of the Edmund Rice Schools Trust in Cork, Ireland.[1] 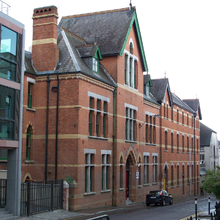 In the mid 19th century the Vincentian Fathers maintained a seminary at Saint Patrick's Place in Cork, known as the Cork Diocesan Seminary. In 1888 a new seminary with residential accommodation was completed at Farranferris, and the Vincentian ecclesiastical students transferred there.

The then bishop of Cork, Most Rev. Dr O'Callaghan, invited the Christian Brothers to take charge of the St Patrick's Place establishment.

The Congregation of Christian Brothers had been established almost 90 years earlier by Edmund Ignatius Rice for the education of poor Irish boys. Over the years, the Order's mission had extended to other countries and other social groups.

From the beginning, CBC was principally involved in preparing pupils for University entry, and operated on St Patrick's Place for a hundred years.

Marking the centenary in 1988, the College moved from its original site to a new location, one hundred metres away, atop Sidney Hill.

1996-1998 saw the modernisation of sports facilities at Lansdowne. 1999 saw an extension to the College complex itself which included improved dining facilities and the creation of a special complex for sixth year students. In 2008, construction was completed on an AstroTurf pitch, which is now used for various sporting activities, including after school football.

Though the Christian Brothers retain a presence on the Board of Management, as Trustees, CBC is now staffed entirely by lay teachers, and is recognised as one of Ireland's leading educational establishments at secondary level. (In the 2006 Sunday Times Schools League Table, CBC was listed among the country's top twenty boys schools.)

CBC has over 1000 students in the college with 885 studying at Secondary Level and more than 250 studying at Primary Level in the Preparatory School.[citation needed] The current principal of the college (both secondary and preparatory) is Dr. Laurence Jordan.[2][3] 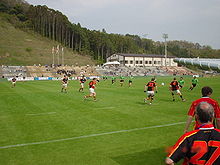 CBC's most recent Senior Cup victory came in 2009 when the side defeated Rockwell College. This came after 2 successive defeats in the final. In 2010, the CBC side failed to regain their title.

Through several fundraising efforts, including the annual Christmas appeal, CBC supports charities including SHARE, S.V.P., HOPE, Trócaire and Concern.[citation needed] One of the school's main charitable activities is the "Zambia Immersion Project",[10] which has run biannually since 2003. This Immersion project involves students travelling to Zambia with chosen staff and assisting the Christian Brothers missions in Murundu, Mufulira.