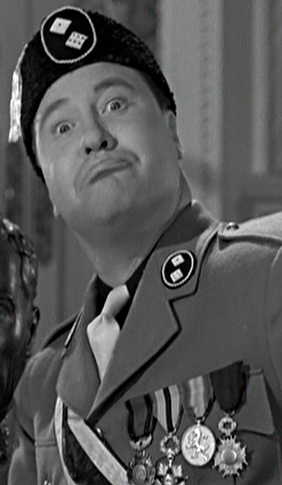 Oakie was born as Lewis Delaney Offield in , . However, he grew up in , which is how he obtained his "Oakie" nickname. His adopted first name, Jack, was the name of the first character he played on stage.

Oakie worked as a runner on , , and narrowly escaped being killed in the of 16 September 1920. While in New York, he also started appearing in amateur theatre as a mimic and a , finally making his professional debut on Broadway in 1923 as a chorus boy in a production of "Little Nelly Kelly" by .

When his contract with Paramount ended in 1934, Oakie decided to . He was remarkably successful, appearing in 87 films, most made in the 1930s and 1940s. In the film "Too Much Harmony" (1933), the part of Oakie's on-screen mother was played by his real mother . During the 1930s he was known as "The World's Oldest Freshman", as a result of appearing in numerous films with a theme. He was also known for refusing to wear screen make-up of any kind, and the frequent use of in his comedy. Oakie was quoted [ [http://www.imdb.com/name/nm0642988/bio Jack Oakie biography] at the website. Accessed 16 June 2007.] as saying of his studio career: cquote|The pictures I made were called the bread and butter pictures of the studio. They cost nothing and made millions, and supported the prestige productions that cost millions and made nothing.

Not being limited by a film studio contract, Oakie branched into radio and had his own radio show between 1936 and 1938.

Oakie is probably most notable for his portrayal of Benzino Napaloni, the boisterous of Bacteria, in Charlie Chaplin's "" (1940), for which he received an Oscar nomination for the Best Supporting Actor Award. This role was a broad of the dictator of , .

A small display celebrating the comedy and fame of Jack Oakie is on display at in . His star on the is located at 6752 , and his hand and footprints may be found at in Hollywood.

Estate to be redeveloped

Oakie made his home in Northridge in the , in 1940-41, buying the 11 acre estate of actress at 18650 Devonshire Street (just west of Reseda Boulevard). Here he planted a citrus orchard and bred s, at one time having up to 100 dogs on the property. After his death, his wife Victoria remained in the home until her passing. She left the property to the (USC). A January 2007 article in the "" reported that Oakie's estate, one of the last remnants of the large Northridge estates famed for breeding, had been sold by to a developer and for subdivision into 29 homes. The article mentioned that Oakie's house, originally commissioned by Barbara Stanwyck and designed by Paul Williams, will remain, possibly as a community centre. [Kevin Roderick, " [http://www.americassuburb.com/oakie_estate_to_be_developed_1.php Oakie estate to be developed] ", blog article dated 13 January 2007, 7:55pm. Accessed 16 June 2007. (The URL for the LA Daily News [http://www.dailynews.com/search/ci_4975464 article] by Dennis McCarthy is dead, as at 16 June 2007).]

* "Autobiography published posthumously by Oakie's widow on 1 January 1980. 240 pages."
* "Letters of congratulation and reminiscence sent from almost 150 celebrities to Jack Oakie in celebration of his 70th birthday. Compiled & edited by Mrs Oakie to commemorate his 90th birthday. 140 pages."