The Martian Way is a science fiction novella by Isaac Asimov. It was first published in the November 1952 issue of Galaxy Science Fiction and reprinted in the collections The Martian Way and Other Stories (1955), The Best of Isaac Asimov (1973), and Robot Dreams (1986). It was also included in The Science Fiction Hall of Fame, Volume Two (1973) after being voted one of the best novellas up to 1965.

Mario Esteban Rioz and Ted Long are both Scavengers, Mars-born humans who scour space for the spent lower stages of spacecraft. Rioz has been doing the work his whole life, but his partner for his current six-month trip puzzles him—a former mining engineer who gave up a comfortable, well-paying desk job in the Martian iron mines for the hardscrabble life of a Scavenger. He doesn't understand Long's philosophical musings on what he calls "the Martian way".

Rioz is tense because the trip has been unprofitable. He chews Long out for wasting power listening to some Grounder (Earth-born) politician named John Hilder making a speech. As Rioz listens to the speech, he realizes that Hilder is saying that Earth's settlements on Mars, Venus, and the Moon are useless drains on Earth's economy, and that spaceships are wasting irreplaceable water by using it as reaction mass.

A year later, Hilder has used his campaign against "Wasters" to gain power in Earth's Assembly, and has just reduced shipments of water to Mars, putting the Scavengers out of work. Rioz thinks the Martians should raid Earth's oceans for water, but Long disagrees. He has a plan of his own to deal with the water crisis. When Hamish Sankov, the head of the Martian colony, learns of Hilder's plan to cut off all water shipments to Mars, he authorizes Long's plan: to travel to Saturn and tow a fragment of the rings—which is almost pure water—back to Mars. 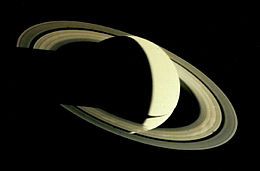 Saturn from space. The Martian Way features an expedition to Saturn's rings by Martian colonists.

The psychologists on Earth believe that nobody can remain in space for more than six months without going crazy, and the trip to Saturn will take a year, but Long believes it can be done. Unlike Earth people, Martians are born and raised in an artificial environment, so spending long periods in a spaceship is no great hardship for them. A fleet of 25 Scavenger ships makes the trip, and the crews discover en route that they enjoy floating out in space. Reaching the rings, the Scavengers choose a fragment approximately one cubic mile in volume, reshape it into a rough cylinder, embed their ships in it, and fly it like a giant ship back to Mars. Using the fragment's ice as reaction mass, they are able to make the return trip in five weeks.

On Mars, a group of Hilder's allies is pressuring Sankov to sign an agreement ending all water exports to the Martian colony. When he hears from the returning Scavengers, Sankov signs. Two days later, the Scavengers land in full view of the press. Sankov announces that the fragment they brought holds a 200-year supply of water, and that if Earth can't afford to lose any more water, the Martians will be happy to sell them some of theirs. Now that the Martians have turned the tables on Hilder's anti-Waster campaign, his power in the Assembly will wane. Long, meanwhile, is confident that it will not be Earthlings but Martians, with their greater acclimation to space travel, who will settle the outer worlds of the Solar System, and eventually, the stars—because that is the Martian way.

The Martian Way was Asimov's response to the McCarthy Era and an early exploration of terraforming Mars. Asimov's distaste for the anti-Communist campaigns of McCarthy and the House Un-American Activities Committee was expressed in his portrayal of John Hilder's anti-Waster campaign. Asimov writes in his autobiography that he expected to be either lionized or condemned for his attack on McCarthyism, but the story actually generated no reaction at all.[1] As he notes elsewhere, "I must have been too subtle—or too unimportant."[2]

The Martian Way of the title may be seen as an expression of the idea of manifest destiny. Asimov describes the vision of his character Ted Long for the Martians' future in terms of the frontier thesis of Frederick Jackson Turner and the idea of a creative minority expounded by Arnold Joseph Toynbee. The critic Joseph F. Patrouch has interpreted Asimov's choice of a mixture of Anglo-Saxon, Slavic, Latin and Scandinavian names (respectively, Ted Long, Hamish Sankov, Mario Rioz and Richard Swenson) for the Martian characters as a celebration of the melting pot of the American immigrant tradition. Also, Asimov's own claustrophilia informs his picture of the Martians, who can withstand isolation and lack of space much better than Earthborn humans.

Asimov was particularly proud of the story's prediction of the euphoria to be experienced by astronauts on spacewalks which were then still thirteen years in the future.