Oak wilt is a fungal disease that can quickly kill an oak tree. It is caused by the fungus Ceratocystis fagacearum. Symptoms vary by tree species but generally consist of leaf discoloration, wilt, defoliation, and death. The fungus is spread from diseased to healthy trees by insect vectors or via connections between tree roots. Management of the disease consists mainly of preventing infection by avoiding tree wounds, removing diseased trees and digging trenches that disrupt root connections. Chemical treatments are available and are mostly preventative as well. Oak wilt is an important disease of oak for timber production and of oak trees in urban areas. 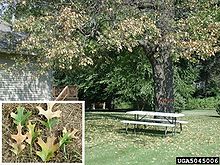 ], northern red, northern pin and others with pointed leaf edges are particularly susceptible and, when infected, generally die over the course of a single summer. Infected red oak wilt from the top of the tree down as leaves become a bronze color and fall off the tree. Another symptom is discoloration of the vascular tissues. Brown streaks or spots can be seen under the bark in the sapwood.

Oaks in the white oak group (white, swamp white, bur and others with rounded leaf edges) are somewhat less susceptible when infected (White Oak in particular) and can live for several years after infection, losing a few branches each season, from the top down. Some types of white oak, such as Bur Oak, are more susceptible than others, although not as susceptible as red oaks. Symptoms in white oak are similar to those in red oak.

Oaks with oak wilt stand out with their dead crown compared to a green canopy in the summer, so much so that oak wilt infections can be spotted from the air.

Live oak susceptibility is somewhat variable depending on environmental conditions but wilt and death usually occur within six months of infection. Live oak foliar symptoms differ from those of red and white oak. Infected live oak leaves develop chlorotic veins that eventually turn necrotic before falling off the tree.

Illustration of the oak wilt disease cycle by Julie Martinez 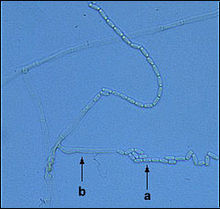 Photograph of spores produced by the oak wilt fungus. (a) Endoconidia (b) Conidiophore

The oak wilt fungus spreads in two basic ways: transfer of spores from diseased to healthy trees by insect vectors and movement of the fungus from a diseased tree to a healthy three through root grafts. After a tree has wilted and died, if conditions are right, spores are produced on fungal mats that form under the bark of the tree. These mats produce asexual spores called endoconidia, which are barrel shaped spores produced in chains. If compatible mating types are present, these mats will also produce sexual spores called ascospores in fruiting structures called perithecia. Certain species of sap beetles are attracted to the fruity smell of these mats. They will visit the mats to feed and breed, thereby picking up the fungal spores. These same beetles are also attracted to the bleeding sap of wounded oak trees and can then deposit the spores picked up from the fungal mats. This method of transmission is important for introducing the fungus into a new area it could not have reached by transmission via root grafts.

Transmission via root graft is the most common means of spread, as trees within as much as 15 m (50 feet) of a diseased tree can be infected. Oak wilt usually moves from diseased trees to healthy trees through roots that have become interconnected (root grafts). In this case, spores (also endoconidia) that have been produced inside the tree travel through the vascular tissue. Most root grafts form between oaks of the same species; red oak roots graft more commonly than do white oak roots, and grafts between red and white oaks are very rare. Although possible, it is rare for oak wilt to jump between oaks of different species via root grafting – different species do not graft often, and so contaminate each other less frequently.

In the Midwest and eastern United States, conditions are usually favorable for spore production and beetle activity in spring and early summer. In Texas, mat formation is most common in late fall and winter.Frequency of root graft formation, and therefore root graft transmission, is affected by soil type and stand composition (diversity of tree species).See disease cycle and management sections for details.

Oak wilt is similar to Dutch elm disease but more controllable. Beetles that carry the oak wilt fungus do not have chewing mouth parts -and need some other creature or physical damage to create open wounds -whereas beetles that carry dutch elm disease DO Have Chewing mouth parts. Prevention is key, as there is no permanent cure. To prevent beetle transmission, oaks should never be pruned in the spring months in the east and Midwest or February through June in Texas. Care should be taken to prevent injury to susceptible trees during this period, particularly from construction. If a tree is injured through a storm or accident in the spring, tree paint to cover the wound is advised. Reducing the source of spores is helpful. When an oak has died from oak wilt, trees should be debarked, split or chipped then burned or covered with plastic sheeting to effect composting. Heat from composting should destroy or severely enervate the fungus. Logs from trees infected with oak wilt should never be moved to unaffected areas, even for firewood.

If infection is discovered in a tree, a trench (or better yet, two generally parallel trenches at different distances from the area of risk) may be dug to a minimum depth of four feet (ca. 1.2 meters) between it and other potentially susceptible species to prevent root graft disease transmission. Such trenching will sever root grafts that may transmit the disease to neighboring trees. An infected tree should not be immediately cut down lest the oak wilt migrate down into the roots and increase the risk of passing via roots to nearby trees.Injections of propiconazole can help prevent transmission as well; as many as a half dozen injections every six months may be required to protect a large red oak near infected trees. Injections every other year may also be used to treat a white oak, if it is not yet greatly affected.

Oak wilt is a devastating disease killing trees rapidly in a single season. It is an important disease in urban areas where a few oak trees in a homeowner's yard may be of great value. If one tree in the homeowners yard becomes infected it will die. Not only will the homeowner need to pay to remove the dead tree, they will also need to protect the rest of the oak trees in their yard or face the prospect that nearby trees in their yard will continue to die. Loss of trees from a property can also lead to a decrease in property value. Even if a homeowner is vigilant about pruning at the correct time, storms and construction can damage trees and introduce oak wilt into a neighborhood. In forest systems, oak wilt is an important disease of oak produced for timber.

Hardwood vascular wilt diseases are characterized by blockage of the tree's water-conducting vessels by either the physical presence of the pathogen (mycelium and spores), or through the host's own response to infection. Oak trees, in response to wounding or infection often produce tyloses, balloon-like outgrowths of the vessels' cell walls that can function to wall-off pathogens and prevent infections from spreading. Fed oaks appear to lack a host-response mechanism that restricts the pathogen's movement, and infection usually kills the tree death by wilting the entire crown. White oaks, which produce tyloses more quickly and in greater numbers, are more resistant to the disease, though the exact mechanism for this resistance is unknown.

The causal agent, Ceratocystis fagacearum, is found only within the borders of the United States, but the origin of the pathogen is not known. Recent evidence suggests that the pathogen was introduced into the United States, possibly from Central or South America, or Mexico[1]. The disease currently affects much of the eastern and central US, from Virginia to Minnesota to Arkansas, with pockets of infection as far southwestward as Austin, Texas. One area of infection has recently been discovered as far northeastward as Glenville, New York. It is particularly common in the [Midwest].