Coordinates: 31°46′N 46°00′E﻿ / ﻿31.767°N 46°E﻿ / 31.767; 46 Bad-tibira, "Wall of the Copper Worker(s)",[1] or "Fortress of the Smiths",[2] identified as modern Tell al-Madineh, between Ash Shatrah and Tell as-Senkereh (ancient Larsa) in southern Iraq,[3] was an ancient Sumerian city, which appears among antediluvian cities in the Sumerian King List. Its Akkadian name was Dûr-gurgurri.[4] It was also called Παντιβίβλος (Pantibiblos) by Greek authors such as Abydenus, Apollodorus and Berossus. This may reflect another version of the city's name, Patibira, "Canal of the Smiths".[5] 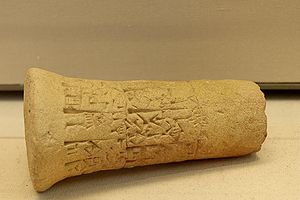 Foundation nail dedicated by Entemena, king of Lagash, to the god of Bad-Tibira (Musée du Louvre)

According to the Sumerian King List, Bad-tibira was the second city to "exercise kingship" in Sumer before the flood, following Eridu. These kings were said to be En-men-lu-ana, En-men-gal-ana and Dumuzid the Shepherd.

The early Sumerian text Inanna's descent to the netherworld mentions the city's temple, E-mush-kalamma. In this tale, Inanna dissuades demons from the netherworld from taking Lulal, patron of Bad-tibira, who was living in squalor. They eventually take Dumuzid king of Uruk instead, who lived in palatial opulence. This Dumuzid is called "the Shepherd",[6] but on the King List it is Dumuzid, the Fisherman who reigns in Uruk, some time after the flood, between Lugalbanda and Gilgamesh.

The "brotherhood text" in cuneiform inscriptions on cones plundered from the site in the 1930s records the friendship pact of Entemena, governor of Lagash, and Lugal-kinishedudu, governor of Uruk. It identifies Entemena as the builder of the temple E-mush[7] to Inanna and Dumuzid, under his local epithet Lugal-E-mush.[8]

Some badly effaced half-bricks on the surface of the mound bore the inscription of Amar-Sin, of the Third Dynasty of Ur. Pieces of vitrified brick scattered over the surface of the large mound bore witness to the city's destruction by fire.[9] Possession of the city passed between Larsa, whose king Sin-Iddinam claims to have built the great wall of Bad-tibira, and Isin, whose king Lipit-Ishtar, "the shepherd of Nippur", claimed to have built the "House of Righteousness" there.[10]