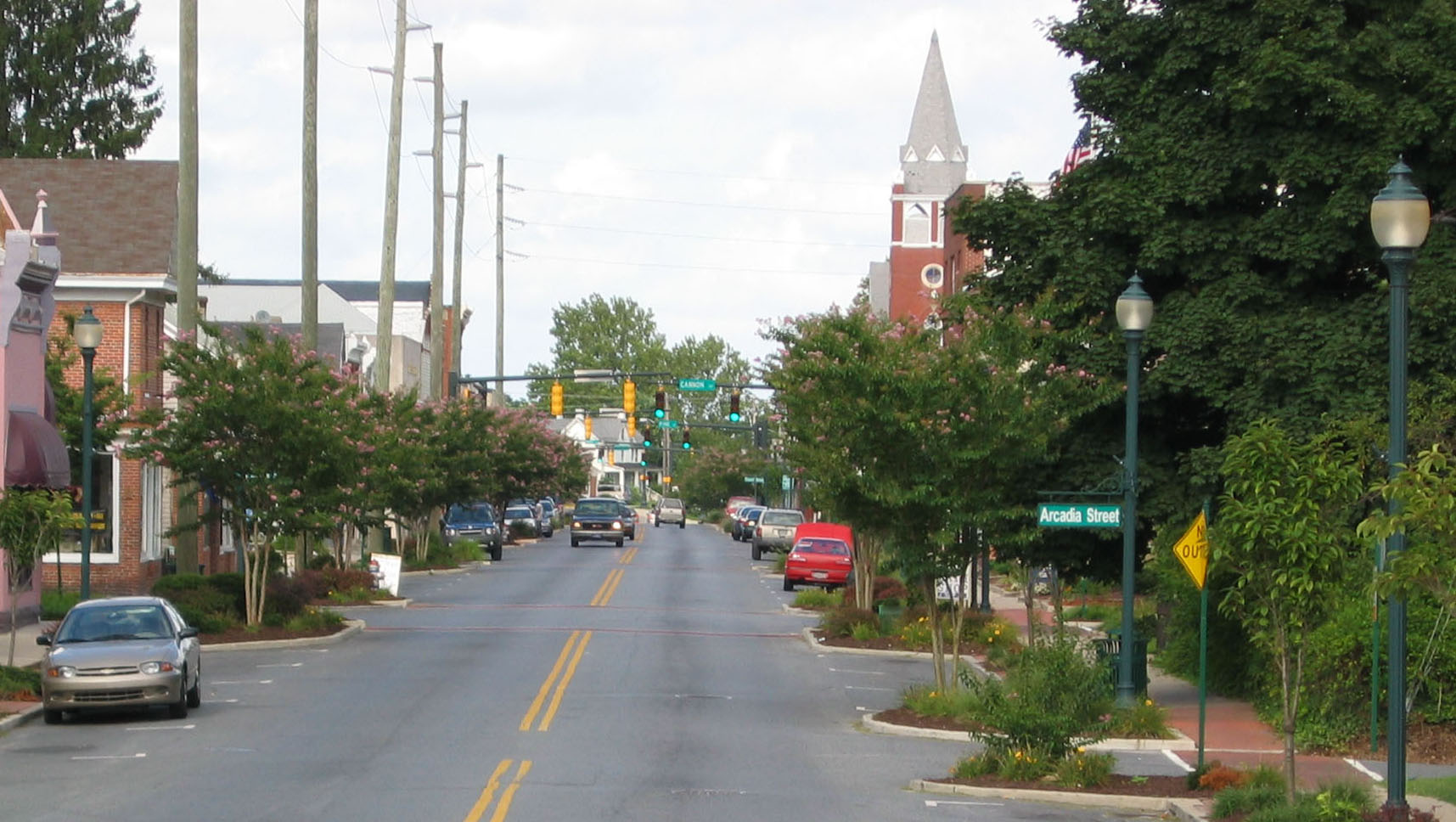 Seaford is a city located along the in Sussex County, . According to the 2000 Census Bureau figures, the population of the city is 6,997 [ [http://quickfacts.census.gov/qfd/states/10000.html] , Delaware QuickFacts from the US Census Bureau , .] . It the principal city of the Seaford Micropolitan Statistical Area, which includes all of Sussex County.

It is the largest city in Sussex county and was voted the 28th Best Small Town in America. [Crampton, N. (1996). The 100 Best Small Towns in America. New York, New York: Prentice Hall.] Fact|date=May 2007. It hosted the Seaford Eagles of the .

The land at the head of the Nanticoke River has long been inhabited by mankind. The Nanticoke Indians and their ancestors have lived along the river for over 6,000 years. The first record of a European to explore the head of the Nanticoke, however, was in 1608 when set out exploring the and its tributaries. There is no evidence that Smith made it all the way to present day Seaford on that first voyage, however he certainly explored much of the surrounding area. Development along the Nanticoke River was slow partly due to friction that developed between the Nanticoke Indians and the English settlers. Once the conflicts were resolved, development in the area flourished.

All land in current western and southern Sussex County was first settled as part of Maryland. Seaford, along with Bridgeville, Greenwood, Middleford, and others, were all part of Dorchester County in the . Blades, Laurel, and Concord areas, on the other hand, were part of Somerset County. The area shows a definite link with the British Isles. The majority of the settlers into the Seaford area came from England; but Ireland, Wales, and Scotland are well represented. It is reported that an error in a map coordinate resulted in the east-west line of Delaware being from current Delmar to Fenwick. The original agreement had the east-west line at , not at the false cape. If the line had survived, Seaford would now be in Maryland. After many years in the courts of London, the boundary lines are as the surveyors Mason and Dixon defined in 1763.

The first record of any settlement in the area around Seaford was a very large tract of land identified as "Martin's Hundred". This convert|1750|acre|km2|sing=on plot of land, bordered by the Nanticoke river and Herring Creek, was granted to of Virginia on , . Despite development in the area, the river was the main highway for many years. It wasn't until 1720 that roads began appearing in court records. The primary industry of the area was agriculture, particularly the cultivation of tobacco, and the style of living was plantation. In addition to agriculture, however, evidence suggests that the area east of where Seaford now resides was a very busy area.

Governor Ross and the Civil War

Innovation in agriculture developed through the efforts of William Henry Harrison Ross. Ross became Governor of Delaware in 1850 and had extensive holdings north of Seaford. Ross was in politics throughout his adult life, holding office from January 1851 to January 1885. His principal place of residence was an Italian Renaissance style mansion (which still exists today) in present-day Seaford that he built in 1850. Only 20 acres of land remain from the plantations original size of convert|1400|acre|km2. There are many notable buildings on this property, you can find a granary, stable, smokehouse, corn cribs, and Delaware's only documented surviving slave quarters.

The Civil War brought division into the community of Seaford, but immediately after the war ended, the town received its and was incorporated on , with a Councilman-Alderman form of government which is still in existence today.

The arrival of DuPont

In 1939, giant acquired convert|609|acre|km2 near Seaford for a production plant. The $8.5 million investment (and consequently the 1,400 construction-related jobs it brought) was welcomed by locals with an impromptu parade. The Seaford plant went into production on , and the first produced by the plant can be viewed at the in Bulked Continuous Filament nylon, a standard in the carpet industry, was developed at the Seaford plant in 1958. The Seaford plant employed over 4,600 employees at its peak in the late 1960s and early 1970s. By 2004, this number had dropped to about 650. Dupont later spun off the nylon fibers business (along with and other products such as ) into a wholly owned subsidiary called Invista. Invista was later sold to for $4.2 billion on , .

In the late 1980s and early 1990s, Seaford was a key hub in East coast distribution; federal agents were occasionally called in to help control gang skirmishes, the gang members themselves often having come from , , or Washington, D.C. The city was featured in the , , documentary "48 Hours on Crack Street".

Seaford is one of seven Main Street communities that participated in the Delaware Main Street Program, part of the national Main Street plan to revitalize commercial districts. The program was developed in the 1970s by the National Trust Main Street Center, [ [http://www.mainstreet.org National Trust Main Street Center] ] which was in turn a program of the . In 1999-2000 Seaford's historic downtown area along High Street underwent major renovations, preserving the city's old fashioned charm with $1.5 million of landscaping, street paving, sidewalks, lamp posts, street lights, and utility upgrades.

Growth and flourishment still continue today as Seaford adds more quality businesses and people to its vibrant residence. The Downtown Seaford Association is an organization formed by the Downtown Businesses. This group works together to help the community. The Downtown Seaford Association sponsors such activities as the Halloween Parade and the Christmas Parade. With more than 500 retail stores and service-related businesses, a stable and respected local government, a diversity of residential developments, a modern hospital and numerous support clinics, elderly care, fine schools and churches, many youth and adult extracurricular educational and recreational programs, numerous volunteer service organizations, and Seaford's location near the most pristine river and recreational beaches on the East Coast, it is little wonder Seaford is considered such a desirable place to live, work and play. In 2005 Seaford was featured in Relocate-America's Top 100 Places to Live. [http://www.homes101.net/news/n419]

Crime in Seaford is well above the national average in most categories. In fact, Seaford's crime rate in murder, forcible rape, and aggravated assault is twice the rate of New York City while its burglary and theft rates are nearly four times higher.

There were 2,629 households out of which 31.5% had children under the age of 18 living with them, 37.8% were married couples living together, 22.3% had a female householder with no husband present, and 36.7% were non-families. 32.1% of all households were made up of individuals and 15.4% had someone living alone who was 65 years of age or older. The average household size was 2.36 and the average family size was 2.95.

The closest airport with commercial air service to Seaford is the in .

Freight rail service in Seaford is provided by two carriers: and the . Norfolk Southern runs north-south through the city, parallel to US 13. It interchanges with the Maryland and Delaware Railroad in Seaford, which heads west to Federalsburg and Cambridge in Maryland.

Students in Seaford are offered a number of public and private school choices.

Seaford is home to the and services children in the Seaford and Blades. The District contains four elementary schools, one middle school and one high school.

The most notable private school is [http://www.seafordchristian.org Seaford Christian Academy] .

WDPB-TV 64 is the only television station originating from Seaford. It is a subsidiary of [http://www.whyy.org/] in Philadelphia and an affiliate of .

Seaford boasts tourism opportunities for all ages and interests.

* Seaford Christmas Parade - The biggest Christmas Parade on the Delmarva Peninsula. It is a night time parade, on the first Saturday of December. http://www.mychristmasparade.comhas more information, including the entry form for participants.
* Kiwanis Park - a beautiful Memorial Park located on Stein Highway.
* Gateway Park - a park complete with brick sidewalks and a fountain, forming the gateway into beautiful downtown Seaford.
* Soroptimist Park - a park located on Williams Pond complete with a playground and a pavilion for parties.
* Nutter Park - named in honor of past Councilman ; located in east Seaford with playground equipment and basketball courts.
* Williams Pond Park - a ballpark run by the Nanticoke Little League.
* Sports Complex - the newest park; includes the newly constructed Jay's Nest, the community-built playground. One softball field has been completed to date but three more softball fields, a youth football field, youth hockey field and volleyball court are planned.
* The Jays Nest - Seaford's community built playground.
* Seaford Golf & Country Club - home to a members-only 18-hole course, pool, tennis courts and recently renovated driving range.
* - in downtown Seaford, the river is paralleled by the recently constructed Nanticoke River Walk.
* Seaford Museum - the Seaford Museum is located at 203 High Street in the historic former post office and serves as a repository for items of significance in the history of Seaford; collections and exhibits highlight Seaford area history from Native Americans to present day; the original map of Seaford is on display; the museum is handicapped accessible. Seaford Museum Web Site: http://www.seafordhistoricalsociety.com/index.cfm?ref=89265
* Ross Mansion and Plantation - located at 1101 North Pine Street Extended in Seaford; former residence of former Delaware Governor ; it is a 20 acre property that includes in addition to the Mansion, a granary with farm equipment exhibits, carriage house, a Victorian cottage and Delaware's only documented log slave quarters; the Mansion is a brick Italian Villa style structure completed in 1859; it is furnished in authentic Victorian style with many pieces having belonged to the Ross family. Ross Mansion Web Site: http://www.seafordhistoricalsociety.com/index.cfm?ref=42198
*Nanticoke Riverfest takes place the second weekend in July and the Nanticoke River is open for citizens to float down the river on s. There is also a three-day festival. The Carnival opens Thursday. Friday evening and all day Saturday merchants and vendors sell their products on High Street. Performers and comedians shows. Free concerts with live bands perform Friday night and Saturday night. There is also a Miss Riverfest Pageant for teenagers to enter, and a Little Miss Riverfest pageant for younger children to enter.

* - located west of Seaford, the ferry operates sunup to sundown, seven days a week with no fare charged; the 200-year-old cable-run ferry boat crossing the Nanticoke River, one of the last remaining ferries on the East Coast, was established circa 1793 by the Cannon family, and served as a major river crossing and trading center for travelers.
* - over 100 years old, still has the original corn stone in use to create products sold commercially today.
* - located at Johnson's Cross Roads, this house is where the noted kidnapping group including Patty Cannon had its headquarters; the group was involved in robbery and entrapment of free blacks in the area; this house was ideal because of its location: one side sits in Maryland while the other side sits in Delaware; today, the house still stands and is a historical landmark.

Seaford is the hometown of...