Date Munenari
In this Japanese name, the family name is "Date".

Marquis Date Munenari (伊達 宗城?, September 1, 1818 – December 20, 1892) was the eighth head of the Uwajima Domain during the Late Tokugawa shogunate and a politician of the early Meiji era. 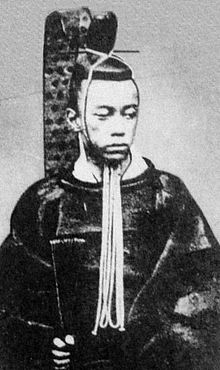 Munenari was born in Edo, the 4th son of the hatamoto Yamaguchi Naokatsu.[1] Munenari, then known as Kamesaburō 亀三郎, was a candidate for adoption by the heirless 7th generation Uwajima lord Date Munetada because Naokatsu's father was the 5th Uwajima lord, Date Muratoki.[2] Munenari succeeded to headship in 1844. He was forced to retire 14 years later, in 1858, during the Ansei Purge. The tairō Ii Naosuke ordered Munenari's retirement, and placed him under house arrest.

After the Ansei purge, he returned to prominence in the subsequent years of political maneuvering in Kyoto, as a member of the conciliatory kōbu-gattai (公武合体 union of court and bakufu) party. Late in Bunkyū 3 (1863), as a proponent of kōbu-gattai, he was made a member of the imperial advisory council (sanyō-kaigi 参与会議), together with Matsudaira Katamori and other like-minded lords.[2] 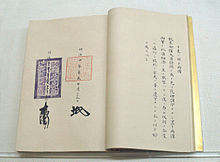 Sino-Japanese Friendship and Trade Treaty, 13 September 1871. The treaty was signed in Tientsin, by Date Munenari and Li Hongzhang.

After the fall of the shogunate in 1868, Munenari took an active role in the new imperial government; Uwajima as a domain was also deeply involved in the military campaign of the Boshin War (1868–1869).

Munenari was a crucial figure in Japan's international relations during the early Meiji period. In 1871, representing the Japanese government, he signed the Sino-Japanese Friendship and Trade Treaty (Nisshin shukō jōki (日清修好条規?)) with Li Hongzhang, a viceroy of Qing Dynasty China.

Also in 1871, the han system was abolished in Japan, and he was able to fully cut his political ties to Uwajima. In 1881, Munenari entertained King Kalākaua, of the Kingdom of Hawaii, on the first state visit to Japan of an actual head of state in its recorded history.[3] He was first created a count in the new peerage system, but was later promoted to marquess.