Ocado's products include own brand groceries from the Waitrose supermarket chain as well as a selection of name brand groceries and other items including flowers, toys and magazines.[2] A range of Carrefour's products are also sold via Ocado.[3] The company was floated on the London Stock Exchange on 21 July 2010 and is currently a member of the FTSE 250 Index.

The company has a warehouse-based model operating from a purpose-built picking centre, purely online without any physical shops, unusual for a supermarket. Ocado operates in England's South East, South Coast, Midlands, North West and most of Yorkshire; and, as of March 2011 - a large section of the South West and South Wales from its brand new Avonmouth based regional distribution centre. 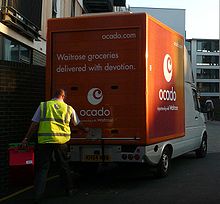 An Ocado delivery in progress

Ocado was founded in January 2001 by Jonathan Faiman, Jason Gissing, and Tim Steiner, former merchant bankers with Goldman Sachs. When the company first started they ran every part of the business themselves.[4]

In September 2006 Michael Grade became non-executive chairman of Ocado, shortly after Goldman Sachs were appointed as financial advisors. This led to perennial speculation that the business would seek a listing on the stock market. In July 2009 Ocado confirmed it was planning a stock market flotation.

In November 2008 the John Lewis Partnership transferred its shareholding of 29% into its staff pension fund. It also agreed a five-year supply deal with the business, replacing its previous one-year rolling deal.[5] This deal was replaced in May 2010 with a 10-year branding and supply agreement.[6] Procter & Gamble took a 1% stake in the company the same year.[7] In February 2011, the John Lewis pension fund sold off its entire Ocado shareholding.[8]

On 13 July 2009 Ocado released their first app for the iPhone. The app, called 'Ocado On The Go', allows users to do their grocery shopping without the need of a PC.[9] On 19 April 2010 the company extended the app to Android devices. The Android app has a number of features that the iPhone app does not have, including the ability to control the app using only the voice.[10]

Ocado has a single warehouse in Hatfield. Crates for each order move automatically around the warehouse, and are filled by picking staff at different sections. These are then delivered using a fleet of custom-built Mercedes-Benz refrigerated delivery vans. In 2003, Ocado introduced satellite distribution warehouses, so they can use larger lorries to deliver parts of the distance. The goods are still packed up for each customer in Hatfield. Each Van is also fitted with a CCTV 'SmartDrive' camera to ensure the product reaches the customer in proper condition. The driver is recorded should the SmartDrive system be triggered and also vocally recorded to ensure employee compliancy.[11]

Jez Frampton, CEO of Interbrand and non-executive director of Ocado, claims the name "Ocado" is a made up word; the name Ocado was meant to be evocative of fresh fruit.