Hamden is a town in New Haven County, Connecticut, United States. The town's nickname is "The Land of the Sleeping Giant." Hamden is home to Quinnipiac University. The population was 58,180 according to the Census Bureau's 2005 estimates.[1] Hamden is a suburb of the city of New Haven.

In 2008, Fortune Magazine and CNN Money picked Hamden as #33 on their "Best Place to Live and Launch" list, citing Hamden's great blend of urban and suburban lifestyles. The article also pointed out Hamden's exceptional education system as well as its "New England Charm".[2] 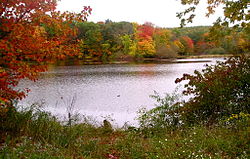 Originally settled by Puritans as part of the town of New Haven, Hamden was purchased by Theophilus Eaton and Reverend John Davenport in 1638 from the local Quinnipiack Native American tribe. It remained a part of New Haven until 1786 when 1,400 local residents incorporated the area as a separate town, naming it after the English statesman John Hampden.

Largely developed as a nodal collection of village-like settlements, (which remain distinct today,) including Mount Carmel (home to Quinnipiac University), Whitneyville, Spring Glen, West Woods, and Highwood, Hamden has a long-standing industrial history. In 1798, four years after Eli Whitney began manufacturing the cotton gin in New Haven, he made arms for the U.S. Government at a mill site in Hamden, where a waterfall provided a good source of power. At that site, Whitney introduced the modern era of mass production with the concept of interchangeable parts.

The major thoroughfare through Hamden has been named Whitney Avenue in honor of Eli Whitney, and it runs past Whitney's old factory, now the Eli Whitney Museum.

Whitney constructed stone houses for his employees in the nearby area, which is still referred to as Whitneyville; this is believed to be the first example of employer-provided homes in U.S. history. In 1806, the dam that Eli Whitney built at the mill site was enlarged to create a reservoir, Lake Whitney. The first truss bridge in the United States was erected nearby over the Mill River in Whitneyville in 1823, but has since been replaced.

The Farmington Canal, which ships traveled from New Haven northward, passed through Hamden between 1825 and 1848 until it was supplanted by railroad travel. The canal right-of-way has become, in recent years, a popular walking and bicycling trail, passing by some of the well-preserved locks of the canal, as well as some of Hamden's oldest sites. Before its use as a walking and bicycling trail, many local residents rode their motocross bikes on the Farmington Canal.

During the 19th and early 20th centuries, Hamden received a steady influx of immigrants, most notably from Italy and Ireland. To this day, a large part of Greater New Haven's Italian-American community resides in Hamden.

During the post-war period, Hamden underwent significant suburban development. Much of the southern section of town is urbanized and is difficult to distinguish from neighboring New Haven. The northern section of town, however, retains a more rural character, and has the distinct neighborhood of Mount Carmel. This area of town is the location of the unique Sleeping Giant hill formation that is the source of the town's nickname.

According to the United States Census Bureau, the town has a total area of 33.3 square miles (86 km2), of which, 32.8 square miles (85 km2) of it is land and 0.5 square miles (1.3 km2) of it (1.62%) is water. The town features the Mill River, which runs from the northern part of town, is dammed to form Lake Whitney, and flows from there to the Long Island Sound. The town also has the Quinnipiac River and Lake Wintergreen, as well as numerous small streams.

The Town Hall at the center of Hamden has a distinctive appearance. Across the street is Freedom Park, which contains a fountain with concrete stepping stones leading to a sign that pleads for peace in several different languages.

Hamden was host to the Ghost Parking Lot, a notable roadside public art installation located in front of the Hamden Plaza shopping center in Hamden's commercial district on Dixwell Avenue. Erected in 1978, it consisted of 15 car hulks, specially treated and encased in asphalt. Although featured in over 100 art books, the attraction was torn down in 2003 due to the excessive cost of restoration and repair.[4][5]

Hamden is bordered by six other towns:[6]

Hamden is governed by a mayor-council form of government, with a 15-member legislative council. Six councilors are elected at large while the other nine are elected by district. Town elections are held biennially during odd years in May. Other elected positions in the town government are the Town Clerk and members of the Board of Education. Positions in the various town boards and commissions are generally appointed by the Mayor subject to approval by the Legislative Council.

Scott Jackson became mayor in 2009. Past mayors of Hamden are:

Shaw's Supermarket was one of the top five major employers but the Hamden Shaw's was sold to ShopRite in a sale of Shaw's Connecticut stores announced on February 13, 2010.[7] The Shaw's supermarket has been shut down and the new ShopRite store has opened.

Hamden is a residential suburb for New Haven with more residents commuting to work in New Haven than residents working in Hamden.

The Wilbur Cross Parkway runs through the center of the town serving as a connection to Hartford in the north, and New York metropolitan area to the south. The town is connected to Interstate 91 via state highway Route 40, a spur expressway to the Mount Carmel section of town. The main route from the town center to New Haven passing through the commercial areas of Hamden is Dixwell Avenue (Route 10). Another route to New Haven via the Spring Glen and Whitneyville residential neighborhoods is Whitney Avenue.

Public transportation is provided by Connecticut Transit New Haven. The main bus routes in the town are the Dixwell Avenue (D) and the Whitney Avenue (J) routes. Other secondary routes serving the town are the State Street (M) and Winchester Avenue (O) bus routes.

North Haven/Hamden Station, a possible station on the proposed New Haven-Hartford-Springfield Commuter Rail Line, may be built next to the Hamden-North Haven border near the Route 40 Connector, serving both towns.[8]

Hamden is home to several private and religious schools, including:

There are several parks and museums located in Hamden, including Eli Whitney Museum in Whitneyville, parts of West Rock Ridge State Park (including Lake Wintergreen) and East Rock Park (including the Pardee Rose Garden), and the Sleeping Giant State Park. The Farmington Canal Trail runs through the town. Two blue-blazed hiking trails, the Quinnipiac Trail and the Regicides Trail, also run through the town.

The Jonathan Dickerman House, listed on the National Register of Historic Places is located in Mount Carmel. Hamden also has an all-volunteer orchestra, the Hamden Symphony Orchestra, providing concerts throughout the year.