Mount Berlin is the sixth highest volcano in Antarctica, located 16 km west of Mount Moulton in Marie Byrd Land near the eastern coast of the Ross Sea. It is composed of two coalesced shield volcanoes: Marren Peak and Berlin Crater. The volcanic structure is considered active, as steaming fumaroles have been observed near the rim of the northern and western calderas, producing fumarolic ice towers. 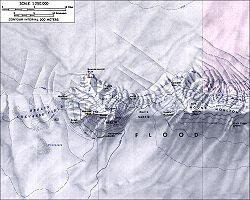 Discovered by the Byrd Antarctic Expedition on flights to the NE and E of Little America in November–December 1934. Named "Mount Hal Flood" by Byrd, but the name Flood is now applied to the entire mountain range of which this is a part. Named by the US-SCAN for Leonard M. Berlin, leader of the USAS party which sledged to this mountain in December 1940.