If I Were King

If I Were King

Infobox Film
name = If I Were King 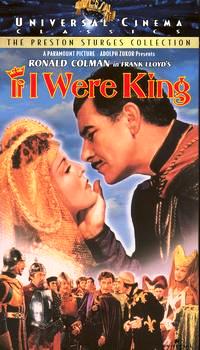 "If I Were King" is a 1938 biographical starring as medieval poet , and featuring and . It is based on the 1901 play and novel, both of the same name, by , and was directed by .

King () is in desperate straits. He is besieged in by the Burgundians and suspects that there is a traitor in his court. He goes in disguise to a tavern to see who accepts a message from the enemy. While there, he is amused by the antics of poet (), who has stolen food from the royal storehouse. The rascal criticizes the king and brags about how much better he would do if he were in Louis' place.

The traitor is revealed to be Grand Constable D'Aussigny (), but before he can be arrested, the turncoat is killed in a brawl by Villon. As a jest, Louis rewards Villon by making him the new Constable, though the king secretly intends to have him executed after a week.

His low-born origin kept a secret, Villon falls in love with Katherine DeVaucelles () and she with him. Then Louis informs Villon about his grim fate. Villon escapes, but when the Burgundians break down the city gates, he rallies the common people in routing them and lifting the siege. Having had to put up with Villon's impudence and wanting less aggravation in his life, Louis decides to permanently exile him from Paris. Villon leaves on foot, with Katherine following at a discreet distance in her carriage.

Cast notes:
*, who plays "General Barbezier", starred as Villon in the first, silent, film version of "If I Were King" made in 1920.
* made his film debut in this film in the uncredited role of a child.
*Sidney Toler went on to achieve fame with his portrayal of "" in a number of films.

Nine months in France were required to prepare for "If I Were King", and the French government cooperated by allowed a replica to be made of the Louvre Palace throne.

Whether , who at the time was Paramount's top writer, had a collaborator in writing the script is unclear: some early drafts have the name "Jackson" on them as well as Sturges', but the identity of "Jackson" has not been determined. In any event, Sturges finished a draft by February 1938. The final screenplay included Sturges' own original translations of some of Villon's poems. [Eder, Bruce [http://www.allmovie.com/cg/avg.dll?p=avg&sql=1:96239 Plot synopsis (Allmovie)] ]

The film was in production from to mid-July fy|1938

Hans Drier was also nominated for an Academy Award for his work on the 1930 film "The Vagabond King", which was a musical version of the same story.

In 1925, composer and librettists and W.H. Post turned it into a successful Broadway operetta, "The Vagabond King", which featured the songs "Only a Rose", "Some Day", and "Song of the Vagabonds". [ibdb title|9049|The Vagabond King] The operetta was filmed twice - in 1930, starring and

The François Villon story was also filmed in fy|1927 under the title "Beloved Rogue", with in the lead role, [imdb title|0017667|Beloved Rogue] as well as many other times.