Oil shale reserves refers to oil shale resources that are recoverable under given economic restraints and technological abilities. Oil shale deposits range from small presently non-economic occurrences to large presently commercially exploitable reserves. Defining oil shale reserves is difficult, as the chemical composition of different oil shales, as well as their kerogen content and extraction technologies, vary significantly. The economic feasibility of shale oil extraction is highly dependent on the price of conventional oil; if the price of crude oil per barrel is less than the production price per barrel of shale oil, it is uneconomic.

There are around 600 known oil shale deposits.[1] Many deposits need more exploration to determine their potential as reserves. However, worldwide technically recoverable reserves have recently been estimated at about 2.8–3.3 trillion barrels (450×10^9–520×10^9 m3) of shale oil, with the largest reserves in the United States, which is thought to have 1.5–2.6 trillion barrels (240×10^9–410×10^9 m3).[2][3][4][5] Well-explored deposits, which could be classified as reserves, include the Green River deposits in the western United States, the Tertiary deposits in Queensland, Australia, deposits in Sweden and Estonia, the El-Lajjun deposit in Jordan, and deposits in France, Germany, Brazil, China, and Russia. It is expected that these deposits would yield at least 40 liters (0.25 bbl) of shale oil per metric ton of shale, using the Fischer Assay.[6][7]

Estimating shale oil reserves is complicated by several factors. Firstly, the amount of kerogen contained in oil shale deposits varies considerably. Secondly, some nations report as reserves the total amount of kerogen in place, including all kerogen regardless of technical or economic constraints; these estimates do not consider the amount of kerogen that may be extracted from identified and assayed oil shale rock using available technology and under given economic conditions. By most definitions, "reserves" refers only to the amount of resource which is technically exploitable and economically feasible under current economic conditions. The term "resources", on the other hand, may refer to all deposits containing kerogen. Thirdly, shale oil extraction technologies are still developing, so the amount of recoverable kerogen can only be estimated.[8][1]

There are a wide variety of extraction methods, which yield significantly different quantities of useful oil. As a result, the estimated amounts of resources and reserves display wide variance. The kerogen content of oil shale formations differs widely, and the economic feasibility of its extraction is highly dependent on international and local costs of oil. Several methods are used to determine the quantity and quality of the products extracted from shale oil. At their best, these methods give an approximate value to its energy potential. One standard method is the Fischer Assay, which yields a heating value, that is, a measure of caloric output. This is generally considered a good overall measure of usefulness. The Fischer Assay has been modified, standardized, and adapted by the American Petroleum Institute. It does not, however, indicate how much oil could be extracted from the sample. Some processing methods yield considerably more useful product than the Fischer Assay would indicate. The Tosco II method yields over 100% more oil, and the Hytort process yields between 300% to 400% more oil.[7]

There is no comprehensive overview of oil shales geographical allocation around the world. Around 600 known oil shale deposits are diversely spread throughout the earth, and are found on every continent with the possible exception of Antarctica, which has not yet been explored for oil shale.[1][9] Oil shale resources can be concentrated in a large confined deposit such as the Green River formations, which were formed by a large inland lake. These can be many meters thick but limited by the size of the original lake. They may also resemble the deposits found along the eastern American seaboard, which were the product of a shallow sea, in that they may be quite thin but laterally expansive, covering thousands of square kilometers.

The table below reports reserves by estimated amount of shale oil. Shale oil refers to synthetic oil obtained by heating organic material (kerogen) contained in oil shale to a temperature which will separate it into oil, combustible gas, and the residual carbon that remains in the spent shale. All figures are presented in barrels and metric tons.

Major oil shale deposits are located in the Democratic Republic of Congo (equal to 14.31 billion metric tons of shale oil) and Morocco (12.3 billion metric tons or 8.16 billion metric tons of shale oil). Deposits in Congo are not properly explored yet.[7] In Morocco, oil shale deposits have been identified at ten localities with the largest deposits in Tarfaya and Timahdite. Although reserves in Tarfaya and Timahdit are well explored, the commercial exploitation has not started yet and only a limited program of laboratory and pilot-plant research has been undertaken.[11] There are also oil shale reserves in Egypt, South Africa, Madagascar, and Nigeria. The main deposits of Egypt are located in Safaga-Al-Qusair and Abu Tartour areas.[7]

The principal Chinese oil shale deposits and production lie in Fushun and Liaoning; others are located in Maoming in Guangdong, Huadian in Jilin, Heilongjiang, and Shandong. In 2002, China produced more than 90,000 metric tons of shale oil.[12] Thailand's oil shale deposits are near Mae Sot, Tak Province, and at Li, Lamphun Province. Deposits in Turkey are found mainly in middle and western Anatolia.[7] 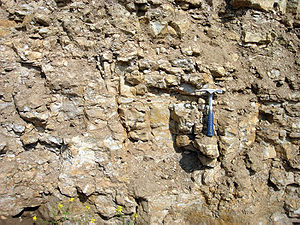 At 301 billion metric tons, the oil shale deposits in the United States are easily the largest in the world. There are two major deposits: the eastern US deposits, in Devonian-Mississippian shales, cover 250,000 square miles (650,000 km2); the western US deposits of the Green River Formation in Colorado, Wyoming, and Utah, are among the richest oil shale deposits in the world.[7] In Canada 19 deposits have been identified. The best-examined deposits are in Nova Scotia and New Brunswick.[2]

Australia's oil shale resource is estimated at about 58 billion metric tons or 4.531 billion metric tons of shale oil, of which about 24 billion barrels (3.8 billion cubic metres) is recoverable.[2] The deposits are located in the eastern and southern states with the biggest potential in the eastern Queensland deposits.[7] Oil shale has also been found in New Zealand.[2]