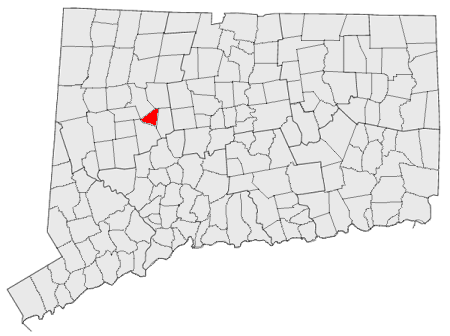 The town, originally part of Plymouth, Connecticut, and referred to as 'Plymouth Hollow' was first settled in the early 1700s. It was incorporated in its own right and under the name 'Thomaston' in 1875. The name derives from Seth Thomas, the early clockmaker, who established a factory in town. The Seth Thomas clock factory building still exists, however the clock making industry has long since left the state and eventually the country.

The town is located at the confluence of the Naugatuck River, Northfield Brook and Black Rock Brook, and is protected by Army Corps of Engineers flood control dams on each of these watercourses. These were all constructed in the years immediately following the devastating flood of 1955 which ravaged the town as well as the state in general.

There were 2,916 households out of which 34.3% had children under the age of 18 living with them, 57.5% were married couples living together, 9.2% had a female householder with no husband present, and 29.1% were non-families. 24.0% of all households were made up of individuals and 9.7% had someone living alone who was 65 years of age or older. The average household size was 2.57 and the average family size was 3.07.

The Route 8 expressway runs along the in the eastern part of town and has three exits in Thomaston. Other state highways in the town are Route 6, Route 109, Route 222, and Route 254.

Thomaston is home to , a school with roughly 500 students. It is also home to Black Rock Elementary School and Thomaston Center School.