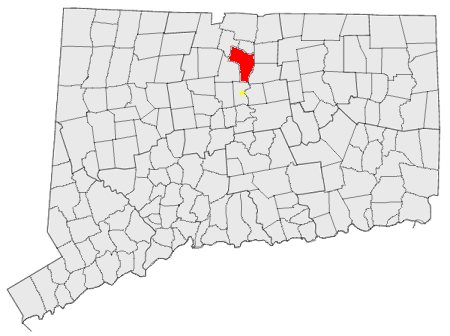 Windsor is a town in Hartford County, , , and was the first English settlement in the state. It lies on the northern border of Connecticut's capital, Hartford. The population was estimated at 28,778 in 2005.

Poquonock is a northern area of Windsor that has its own (06064) for purposes. [http://zip4.usps.com/zip4/citytown.jsp] Other areas in Windsor, which are not incorporated, include Rainbow and Hayden in the north, and Wilson and Deerfield in the south.

The Day Hill Road area is know as Windsor's Corporate Area, although other centers of business include Kennedy Industry Park and Kennedy Business Park, both near and the Addison Road Industrial Park.

The and Mohawk were at war, catching the Podunk in the crossfire and forcing them to pay tribute to the Pequots, who claimed their land.

The Sicaog tribe made a similar offer to the Dutch in , but they declined to send settlers, since their interest in Connecticut was limited to the fur trade.

A small party of settlers from , founded a trading post at Windsor after the Indians invited them to provide a mediating force between other tribes, and granted them a plot of land. After from Plymouth inspected the site, William Holmes led a small party there. This initial group arrived at Windsor on , , settling at the confluence of the Farmington and the west side of the s. They were about 50 miles up river at the end of ship navigable waters and above the Dutch fort at Hartford. They were in a good position to trade with the Indians before the Dutch. More settlers arrived in 1635 led by the Revs Maverick and Warham with about 60 people who trekked overland from where they had first settled after coming on the ship "Mary and John" to the New World from in 1630. More settlers from Dorchester moved to Windsor in the next few years. Out numbering the original settlers they soon displaced the original Plymouth settlers, who mostly returned to Plymouth.

Native Americans referred to the area as Matianuck. (book- "Dorset Pilgrims" by Frank Thistlewaite) Reverend Warham renamed the settlement Dorechester in 1635. In 1637, the colony's General Court changed the name to Windsor. [http://www.townofwindsorct.com/about/index.htm]

Windsor's name is believed to be named after the city of Windsor England on the Thames River. Windsor is believed to be a corruption of the Saxon words 'windlass Oran' meaning a bank of a river with a windlass.Fact|date=June 2007 The name of Windsor derives from Windlesore, or 'Winding Shores' where boats were pulled by windlass ('windles') up the river. As with all such names that date back many centuries, there are other claims as to the derivation of the name. It has also been thought that the name derived from 'winding' meaning 'meandering' shores. A third school of thought stemmed from the belief that the name derived from 'a sore wind' referring to the wind that blew across the mound upon which Windsor Castle, England was built but this fails on chronological grounds. [ [http://www.thamesweb.co.uk/windsor/windsorhistory/brief.html A Brief History of Windsor - ThamesWeb Windsor ] ]

Several towns that border Windsor were once entirely or partially part of Windsor including: Windsor Locks; South Windsor; East Windsor; Ellington, (which was later part of East Windsor); and Bloomfield, (originally called "Wintonbury"; a composite of the town names Windsor, Farmington and Simsbury). [http://www.bloomfieldct.org/Pages/BloomfieldCT_WebDocs/about]

The first "highway" in opened in 1638 between Windsor and Hartford. As other towns were settled further up the Connecticut river like and trading routes were extended to all of them. Hartford & Springfield Street Railway connected with the Conn. Co. in Windsor Center until 1925. Buses replaced trolleys between Rainbow (a northern section of Windsor) and Windsor Center in 1930; cars continued to run from Windsor to Hartford until 1940. [ [http://www.bera.org/trolleytowns/trolleyhtml/windsor.html Trolley Towns CT: Windsor ] ]

These original Windsor settlers have many descendants around the country and beyond. Many are members of The Descendants of the Founders of Ancient Windsor (DFAW) based in the Windsor area.

The Windsor Historical Society manages a collection of old homesteads that have existed since the 17th and 18th centuries and are available for tour. [http://www.windsorhistoricalsociety.org/]

On historic Palisado Avenue, one can find the First Church In Windsor, Congregational and adjacent graveyard. [http://www.firstchurchinwindsor.org/]

Across the street on the Palisado green stands a statue of John Mason (a founder of Windsor and colonial leader in the Pequot War).

Further down the road is the home of , second Chief Justice of the United States Supreme Court. [http://www.ctdar.org/homestead.htm]

The town center is well-planned in comparison to many of the others in the area, including a relative diversity of chains and local shops, as well as a recently restored station that dates to the 1850s.

The Vintage Radio and Communications Museum of Connecticut is also located in Windsor. [http://www.nationalcommunicationsmuseum.org/]

farming in Connecticut has a long and illustrious history. When the first settlers came to the valley in the 1630s, tobacco was already being grown by the native population. By 1700, tobacco was being exported via the to an ports. The use of Connecticut tobacco as a wrapper leaf began in the 1820s. By the 1830s, tobacco farmers were experimenting with different seeds and processing techniques. [ [http://www.cigaraficionado.com/Cigar/CA_Archives/CA_Show_Article/0,2322,854,00.html Wrapped Up | Cigar Aficionado, Winter 1992] ]

Area farmers grew tobacco for the two outside layers of cigars, the binder and the wrapper. A tobacco leaf type named Shoestring, then Broadleaf and Havana Seed were used. In the late 1800s a fine grained leaf type imported from Sumatra began to replace the wrapper from the Connecticut River valley. The tobacco farmers matched the Sumatran leaf by making shade tents of cloth to cut sunlight and raise humidity. The first tent was raised in 1900 on River Street in Windsor. [ [http://www.tobaccohistsoc.org/index.htm Connecticut Valley Tobacco Historical Society] ] Windsor tobacco leaves are highly prized by fine cigar makers, and are used as the cigar's outer wrapping. The former president of U.S. operations for , a maker of luxury goods company including premium Cuban cigars, praised Connecticut shade tobacco as "A nice Connecticut wrapper" and "…very silky, very fine. From a marketing point of view, it is considered at the moment to be one of the best tasting and looking wrappers available" in a article on why the world's best cigars use Connecticut tobacco wrapper leaves. [ [http://www.cigaraficionado.com/Cigar/CA_Archives/CA_Show_Article/0,2322,854,00.html Wrapped Up | Cigar Aficionado, Winter 1992] ]

The technique of growing shade tobacco has changed little in the past hundred years. To form the shade tents, a tobacco field is set with posts in a grid layout. Wires are stretched from post to post, and a light, durable fabric (once but now a ) is tied across them and draped along the sides. For example, twenty posts in four rows of five will create twelve square cells in three rows of four. Two s hold up Under the tents the is soft and diffused the air is and the is slightly warmer than outside. Filtering the sun produces a thinner and more elastic tobacco leaf that cures to a lighter, even color.

While much of the Day Hill Road section of town has been given over to industry, the long red wooden sheds that are used to store and dry the tobacco are still noticeable. The Connecticut Valley Tobacco Museum [http://www.tobaccohistsoc.org/] containing authentic farming implements and tools can be found at located in Windsor. [ [http://www.northwestpark.org/about_us.htm Friends of Northwest Park] ]

* , the well-known college preparatory school is located in Windsor, on a 320 acre (1.3 km²) campus at the confluence of the Connecticut and Farmington rivers.

* Windsor Meadows State Park is in the south east corner of town. [http://www.stateparks.com/ct.html] The park runs down the shore of the .

* , Windsor's largest park, is located in the northwest corner of Windsor. It includes a nature center, trails and a . [http://www.northwestpark.org ]

* Welch Park is in the of Poquonock on the . Welch Park is home to a public pool and numerous diamonds, along with a small playground.

* Stroh Park is off of Route 159 near Wilson Congregational Church towards the south end of town. Stroh Park is home to a public pool, tennis courts, a playground, and a pond.

* Strawberry Hills Park is located on River Street. A popular location in the summer months for those interested in and the .

* The Northwest Park Country Fair is held every fall. [http://www.northwestpark.org/friends_events.htm]

* , which serves as well as the greater , is located in the adjacent town of Windsor Locks to the north.

* The '30' and '34' lines of (CT Transit) Buses runs between Hartford and through Windsor, while the '32' line connects Windsor's town center to Hartford. The '36' line and an extension of the 'T' line serves the Day Hill corridor, and the '15' line provides express service from the Poquonock park and ride to downtown Hartford. [http://www.cttransit.com/content/routesHartford.asp]

* has 7 exits in Windsor, including an High Occupancy Vechicle (HOV) Lane travelling north and south between Hartford and the Bradley International Airport Connector, Route 20.

* begins in Windsor with 3 exits; it connects with .

* A single train line runs along the through Windsor, with one stop for trains in Windsor's Center.

* SS&C Technologies, Inc. -- Has its corporate headquarters at 80 Lamberton Road in Windsor. [http://www.ssctech.com/about/investor.asp]

* -- Maintains a back office within the Day Hill Road corporate area on Lamberton Road. [http://www.travelers.com]

* Mototown USA -- Recently opened in 2006. At over 200,000 square feet, the complex is a large indoor facility. [http://www.mototownusa.com/mototown/home.asp]

* -- The company has offices at 16 and 20 International Drive for its Nuclear Services and Nuclear Power Plants Divisions. It also has a Nuclear Fuels Division components manufacturing facility on Addison Rd.

* -- Back office location is within the Day Hill Road Corporate Area. [http://www.ing.com] [http://www.courant.com/business/hc-thehtfd1208.artdec08,0,4271400.story?coll=hc-headlines-business]

* -- Back office is located at the corner of Day Hill Road and Blue Hills Avenue. [http://www.thehartford.com] [http://www.courant.com/business/hc-thehtfd1208.artdec08,0,4271400.story?coll=hc-headlines-business]

* Marriott and -- Located in the Day Hill Road Corporate Area. [http://marriott.com/property/propertypage/BDLWD] There is also a Residence Inn towards the town center in Windsor.

* -- Construction of a extended stay hotel, near the Day Hill Road Corporate Area, to be completed in 2008. [http://www.hyatt.com]

Windsor's lowest point is at the shore at 5 feet (2 m). The Connecticut River defines Windsor's east border. The city of Hartford, the Capital of , is adjacent to Windsor to the south. The town of Windsor Locks, home of , is adjacent to Windsor to the north. Prior to its incorporation in 1854, it was known as the Pine Meadow section of Windsor. The towns of East Windsor and South Windsor are on east side of the Connecticut River, which defines Windsor's eastern border. The town of Bloomfield is to the west. The town of East Granby is to the northwest.

The joins the Connecticut River in Windsor. The Farmington River is dammed in the northwest corner of Windsor to form the 234 acre Rainbow Reservoir. [ [http://www.paddling.net/places/showReport.html?931 Rainbow Reservoir - CT ] ]

23.2% of all households were made up of individuals and
8.8% had someone living alone who was 65 years of age or older.

The average household size was 2.61 and the average family size was 3.10.

Racial makeup of the town was

Hispanic or Latino of any race were 4.98% of the population.