Tour skating is a sport and recreational form of long distance ice skating on natural ice.

The Nordic style of tour skating is popular in the Nordic countries, especially Sweden, but increasingly in Finland and Norway, where it is respectively called långfärdsskridsko (Swedish), retkiluistelu (Finnish) and turskøyting (Norwegian). In Canada and the USA this style is often called Nordic skating. Other names used are trip skating and wild skating.

Another style of Tour Skating, which is popular in the Netherlands, is called toerschaatsen (Dutch).

While the Nordic version usually involves choosing your own tours over the ice, in the Netherlands skaters follow marked routes on frozen canals and lakes. Consequently the equipment used and safety requirements differ somewhat between these two schools of tour skating.

Nordic skating was developed during the 1900's in Sweden from the original Dutch Tour Skating which is another sport. Nordic skating is not known nor practised in the Netherlands. Long distance races are organized annually in the Nordic countries, such as Vikingarännet (the Viking Run) in Sweden and Kuopio Ice Marathon in Finland.

Nordic skating usually involves choosing your own tours over the free ice in groups with all safety equipment. Nordic skating is only practised on free and open ice, not in tracks nor other manmade iceways. Nordic skates differ significally from the Dutch tourskates.

Tour skates are fitted with a blade approximately 50 cm long and are attached with bindings to specialized boots similar to walking boots or cross country skiing boots, often with a free heel. Since tour skating often involves walking between lakes or around sections not suitable for skating, the fact that the blades can be easily removed from the boots is convenient.

In addition the following safety equipment is often recommended:

Knee and elbow pads and a helmet are also commonly used.

In late autumn/early winter the small lakes freeze first, sometimes as early as October. If snow falls these lakes can become unskateable. Next the somewhat larger lakes freeze and become skateable.

In January-February parts of the archipelago in the Baltic sea often freeze. This is the time when long skating tours can be undertaken. Tours of 60–80 km in one day are not uncommon - some skate over 150 km. 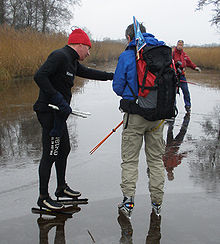 Two Tour skating styles: Netherlands(left) and Nordic (right), on a canal in Holland

In the Netherlands, the style of Tour skating is called Toerschaatsen, where skaters follow marked routes on frozen canals and lakes, which are coordinated by the Royal Netherlands Skating Union.[1][2]

Despite its moderate climate in which real cold winters are rare, skating is traditionally the most popular winter pastime in the Netherlands. Thousands of Dutch leap at the chance in cold winters to tie up their skates and glide across frozen lakes and canals, and sports stores all over the country sell out their skates.

The skaters mostly use common speed skates, with blades rigidly attached to the skating shoes. Ice-poles and other safety equipment are normally not carried.

The Netherlands is home of Elfstedentocht, a 200 km distance skating race of which the tracks leads through 11 different villages in Friesland which is a northern province of the Netherlands.

Skate tracks on natural ice are maintained by the towns and communities, who take care of the safety of the tracks.