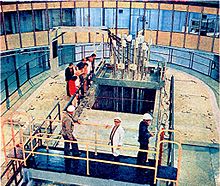 The reactor during construction

The Maria reactor is Poland's second research nuclear reactor and the only one still in use. It is located at Świerk-Otwock, near Warsaw and named in honor of Maria Skłodowska-Curie. It is the only reactor of Polish design.

Maria is a multifunctional research tool, with a notable application in production of radioisotopes, research with utilization of neutron beams, neutron therapy, and neutron activation analysis. It operates about 4000 hours annually, usually in blocks of 100 hours.

The technical details of the reactor are given in the reference.[1]

Maria is a pool type reactor with a power of 20 to 30 MW (thermal). Despite it being a pool reactor, it contains channels (aluminum tubes) individually connected to the primary coolant. The water pool provides cooling for elements (e.g., fuel elements) that are not otherwise cooled, and also acts as radiation shielding. Maria uses enriched uranium as fuel (80% enrichment in 235U till year 1999; 36% since). The fuel elements and channels are vertical but arranged conically. Water and beryllium blocks serve as the moderator (70% and 30% of the moderation, respectively). Elements of boron carbide sheathed in aluminum are utilized for control, compensation, and safety. The use of beryllium blocks results in a comparatively large fuel lattice pitch, and consequently large volume for payload targets. There is also a graphite reflector (aluminum sheathed). Maria supplies a neutron flux of 4x1014 n/cm2s (thermal neutrons) and 2x1014 n/cm2s (fast neutrons). There are six horizontal channels for controlled use of neutron beams. There is also a window of lead-containing glass through which the core can be viewed. The reactor is housed in a sealed containment.

Construction began on June 16, 1970 and the reactor was activated on December 18, 1974. With the shutdown of the Ewa reactor in 1995 it became Poland's only research nuclear reactor.

In February 2010, it was announced that Maria will start producing medical isotopes, to help ease the isotope shortages due to shutdowns of the Canadian NRU reactor and the Dutch Petten nuclear reactor[2][3].