Climate Challenge is a Flash-based global warming game produced by the BBC and developed by Red Redemption. Players manage the economy and resources of the 'European Nations' as its president, while reducing emissions of CO2 to combat climate change and managing crises. Climate Challenge is an environmental serious game, designed to give players an understanding of the science behind climate change, as well as the options available to policy makers and the difficulties in their implementation.[1]

The game begins in 1990 and ends in 2100(although the last turn is in 2090). This time is divided into turns for every 10 years. Every turn, players may choose up to six policy cards to implement. Policy cards come from five different categories: National, Trade, Industry, Local, and Household. National policies are strategies that are implemented on the scale of entire countries, like hosting the Olympics, sending a shuttle to Mars, and creating the carbon police. Trade policies are either import or export policies of different resources and technologies, and also includes sending aid to developing countries. Industry policies include different agricultural methods and switching coal to oil. Local policies include things like rainwater use, housing regulations, and landfill power plants. Finally, household policies deal with the everyday lives of the populace, like setting emissions standards, regulating efficiency standards of household appliances, and promoting energy efficient light bulbs.

Climate Challenge is also the first and only media program in the U.S. to focus exclusively on climate change and related issues. You can find multiple episodes of the show on Vimeo at: http://vimeo.com/user4640499/videos 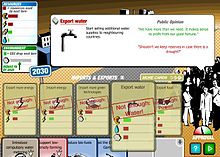 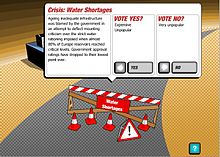 A water shortage, caused by the player exhausting the water resource on the previous turn.

The four resources of the game are money, power, food, and water. Each is measured by a meter in the upper-left corner of the screen and by clicking on any individual item, a graph of the resource over time is displayed. Each turn, a red section on the grey bar shows the estimated amount by which that resource will be reduced, and a green section shows the estimated growth. These bars adjust themselves to the selected policies as they are affected. Most policy cards deplete or grow different resources, and if any of the resource bars are reduced to nothing or are entirely in the red, policy cards requiring that resource become unavailable. When a resource is exhausted by the end of the turn, the player must manage a corresponding disaster the following turn.