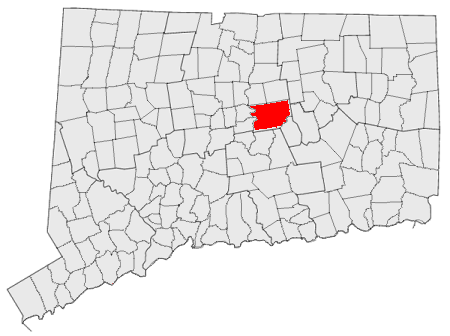 Glastonbury is a town in Hartford County, , . The population was 31,876 at the 2000 census. The town was named after the English . Glastonbury is located on the banks of the Connecticut River, south east from Hartford. The town center is also defined by the U.S. Census Bureau as a (CDP).

The town begins on the banks of the and extends up into foothills, many of which provide a view of Hartford's skyline. Some major developments in the town are built entirely on relatively steep hills, such as "Minnechaug Mountain", the major residential area developed from the 70s until late 90s.

Part of Glastonbury resides in an area called "Kongscut Mountain", locally called "Rattlesnake Mountain", because it has a small population of s. Since that area is sparsely developed and mostly in a state forest, the snakes don't pose much of a threat. Incidents are rare and every known bite has been treated in time.

The town boasts a small private lake named Diamond Lake, which is surrounded by growing subdivisions of large homes. Access to Diamond Lake is limited to members of the Diamond Lake Property Owners Association.

Glastonbury has one of largest state forests, Meshomasic State Forest, a popular area for hiking, fishing, and hunting.

Glastonbury is the wealthiest town east of the Connecticut River (in terms of household income) in the state of Connecticut. Many estates are perched on hills with views of the Hartford skyline. Glastonbury has experienced continuous rapid growth since the 1950s, and was on the edge of Hartford's urban sprawl until the mid-1990s. By mid-1990s, growth moved beyond Glastonbury as the open land became sparse and the municipality began buying back land. Currently, most of the development are subdivisions of large homes on relatively small lots, and existing property has experienced a significant growth in real-estate values as the state of began constructing a , increasing the land shortage for metro Hartford.

There were 12,257 households out of which 1% had children under the age of 18 living with them, 63.7% were married couples living together, 7.5% had a female householder with no husband present, and 26.7% were non-families. 22.6% of all households were made up of individuals and 8.8% had someone living alone who was 65 years of age or older. The average household size was 2.57 and the average family size was 3.06.

There were 3,257 households out of which 24.2% had children under the age of 18 living with them, 47.6% were married couples living together, 7.8% had a female householder with no husband present, and 42.7% were non-families. 36.8% of all households were made up of individuals and 17.2% had someone living alone who was 65 years of age or older. The average household size was 2.14 and the average family size was 2.84.

In 1636, thirty families were settled in Pyaug, a tract of land belonging to Wethersfield on the eastern bank of the Connecticut River bought from the Native American Chief, Sowheag, for convert|12|yd|m|0 of trading cloth. In 1672, Wethersfield and Hartford were granted permission by the General Court to extend the boundary line of Pyaug convert|5|mi|km|0 to the East. By 1690, residents of Pyaug had gained permission from Wethersfield to become a separate town and, in 1693, Glastonbury came into existence. The ties have not been completely broken: the oldest continuously operating ferry [http://www.wethersfield.net/html/gov/ct/rhill/ferry/ferry-info.html] in the United States still runs between South Glastonbury and Rocky Hill, also then part of Wethersfield, as it did as far back as 1655. (One result of being split off from Wethersfield was that the town was built along a main road, rather than the large green that anchors most New England towns. After part of New London Turnpike was realigned to eliminate the rotary in the middle of town during the mid-20th century, a small green was established there.)

During the Revolution, Glastonbury was home to George Stocking’s gunpowder factory. In the 18th and early 19th centuries, Glastonbury was a shipbuilding town, located between the Connecticut River, oak forests, and reliable waterpower. The shipyards’ needs were filled by sawmills, charcoal kilns, and foundries.

As shipbuilding was ending, the early industrial beginning continued. The J.B. Williams Soap Factory started in 1840 in James B. Williams’ drugstore in Manchester, where he experimented with chemical formulas for shaving soap. When he had produced a formula that satisfied him, he moved his business to Glastonbury. Two years later, he was joined by his brother, William Stuart Williams. They formed what is believed to be the first commercial soap manufacturing business in the world. Although shaving soap was their first product, they also made ink and shoe blacking. Products made by the J.B. Williams Company included Williams ‘Lectric Shave and Aqua Velva. Over time, J.B. Williams expanded to Montreal (around 1922), England, and Argentina. When the business was sold in 1957, ten former employees organized Glastonbury Toiletries and continued operation into the 1970’s. Remaining parts of the complex are currently the Soap Factory Condominiums and the Glastonbury Board of Education office.

During the World Wars, Glastonbury factories supplied leather and woolen goods to the military of Belgium, France, Great Britain, Italy, and the United States. In addition, Glastonbury has been home to feldspar mills, cotton mills, paper mills, a maker of silver plate, and a builder of airplanes, to name a few.

Also an agricultural town, J.H. Hale Orchards began in Glastonbury. John Howard Hale was known as the Peach King. He developed a peach that could withstand New England winters and was disease resistant. He also had land in Georgia and was the first Glastonbury industry to establish a branch outside the state. He was a marketing pioneer, shipping peaches all over the country. The orchard that started with one acre in 1866 grew to more than convert|1200|acre|km2|0 by 1900.

John Hale never went beyond grade school, but he was responsible for Storrs Agricultural College, now UConn. He helped organize Glastonbury Grange and the State Grange. His home, at the intersection of Main Street and Route 17, was once used as a restaurant and is currently offices.

In 1948, the Saglio Brothers formed Arbor Acres and produced a chicken that A&P Food Stores awarded the title “Chicken of Tomorrow”. Glastonbury was also a major grower of broad leaf tobacco. Her agricultural tradition is carried on by the orchards and berry farms in her hills.

Glastonbury has been progressive, freeing her slaves in the 1780’s, sixty years before slavery became illegal in the State of Connecticut. Her first library was founded in 1803. Her first hospital was formed shortly after the Revolution to combat and treat small pox. By the end of the Revolution, there were ten schools, formed one by one during the 1700’s.

During the Revolutionary War, several homes embraced classes from Yale University. Noah Webster was both a student in these classes, and taught classes in one of Glastonbury’s one-room schoolhouses.

(With the exception of a minor addition, this history is derived from text provided by the [Historical Society of Glastonbury] [http://town.glasct.org/hissoc/index.html] )

* The major highway in Glastonbury is Route 2, serving the town with six exits.
* Route 3 only has the Main Street exit in Glastonbury. The expressway then follows its westward route across the Putnam Bridge into Wethersfield before connecting with .
* Route 17 has two exits in Glastonbury: the New London Turnpike and Hubbard Street. It then reduces to a surface street, merging with Main Street in South Glastonbury.
* The O route of (CT Transit) buses run between Downtown Hartford and Glastonbury, usually terminating at the corner of Main Street and Hebron Avenue. The 91 route travels to/from Wethersfield via the Somerset Square Shopping Center. The 4-Glastonbury Express route conveniently operates into Putnam Bridge, St. Paul's, and St. Augustine's Park & Ride lots.

There are 6 elementary schools in Glastonbury: Buttonball School, Eastbury School, Hebron Avenue School, Hopewell School, Naubuc School, and Nayaug School. Each school has between 350 and 700 students. There are 2 middle schools in Glastonbury. Gideon Welles School has about 550 students for the 6th grade, and Smith Middle School has about 1,000 7th and 8th grade students. The town's high school, , has 2,061 students, as of January 2008.

The most notable of town events is the Glastonbury Apple Harvest festival. The harvest festival occurs annually every October during the apple harvest season. The festival is town wide event lasting three days that includes various rides and attractions, including booths from many of the local town businesses and politicians.

Other events include the strawberry moon festival and various events held by the local town historical society.