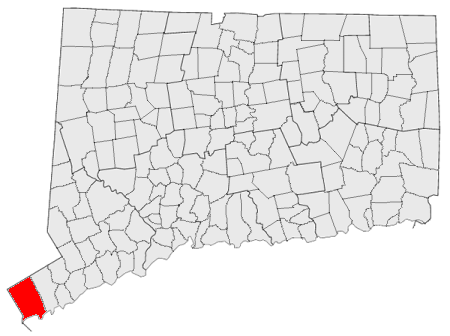 Greenwich is a town in Fairfield County, , . As of the 2000 census, the town had a total population of 61,101. It is home to many s and other financial service companies that have left .Fact|date=May 2008 Greenwich is the southernmost municipality in Connecticut and is 37 minutes by train (express) from in Manhattan. In July 2005, [http://money.cnn.com/best/bplive/ CNN/Money and "Money" magazine] ranked Greenwich 12th on its list of the 100 Best Places to Live in the United States. The town is the location of Greenwich Hospital, a community hospital with 174 beds and a teaching affiliate of .

Greenwich has one local government but consists of several distinct sections, each of which often has its own mailing addresses and s: as Cos Cob 06807, Riverside 06878, Old Greenwich 06870, and Greenwich 06830 and 06831 (sometimes referred to as Greenwich proper, central, or downtown Greenwich).

The town has three Selectmen and a Representative Town Meeting (RTM). The RTM must approve all budgets, and consists of 230 elected representatives. RTM members are not paid. The three selectmen are elected on a town-wide basis, although each person can only vote for two members. This assures that there will almost always be one Democrat and two Republicans or two Democrats and one Republican. While voter registration is skewed in the Republican's favor, which is rather uncommon in New England, they do not have a lock on the First Selectman's chair, and Democrats have held the seat recently. Many of the other town committees have equal representation between Democrats and Republicans, regardless of the vote breakdown, since each individual can only vote for half as many seats as are available.

During the , General made a daring escape from the British on , . Although British forces pillaged the town, Putnam was able to warn Stamford.

In 1983, the , which carries traffic on Interstate 95 over an estuary, collapsed, resulting in the death of three people.

Originally, Greenwich Point (locally termed "Tod's Point"), was open only to town residents and their guests. However, a lawyer sued, saying his rights to freedom of assembly were threatened because he was not allowed to go there. The lower courts disagreed, but the Supreme Court of Connecticut agreed, and Greenwich was forced to amend its beach access policy to all four beaches.when

During the late 1990s and early 2000s, Greenwich's location as the first Connecticut town off Interstate 95 and the meant that when New York City-area residents wanted to buy lottery tickets as the jackpot rose above $100 million, they crowded into Greenwich stores to purchase them, creating traffic jams in the business areas. The introduced special rules for such situations. This no longer became a problem after Pennsylvania joined Powerball in 2002; those living west of the Hudson River no longer cross it to buy Powerball tickets.

Greenwich is divided into several small sections, among them:
*
*Riverside
*Cos Cob
*Glenville
*Pemberwick
*Greenwich
* (formerly East Port Chester)Each, with the exception of Byram, Pemberwick, and Glenville, have their own and train station.

A curious aspect of Greenwich's position in the southwestern "tail" of Connecticut is that by traveling north, south, east or west from any point in town, one will eventually reach the State of New York. Westchester and Putnam Counties lie to the north and west. Nassau County is directly south across Long Island Sound, and a long boat ride due east will land you on the northeast branch of Suffolk County, Long Island.

Round Hill, with an elevation of more than convert|550|ft|m, was a lookout point for the Continental Army during the American Revolution. The Manhattan skyline is visible from the top of the hill. [Nova, Susan, "Many rooms, skyline views: Chateau atop Round Hill is for sale", article, Real Estate section, "The Advocate" of Stamford, , , page R1]

Calf Island, a 29 acre island about convert|3000|ft|m from the Byram shore in Greenwich, is open for visitors although as of the summer of 2006 it was getting relatively few of them.

More than half of the island (on the west side) is a bird sanctuary off-limits to members of the public without permission to visit. The island is available for overnight stays for those with permits, otherwise the east side is open from dawn till dusk.

is also off the coast of Greenwich, and is the southernmost point of New England.

Island Beach or "Little Captain Island" once was the venue for the town's annual "Island Beach Day." Ventriloquist and his dummy, Jerry Mahoney, once came for a show, and on another occasion the National Guard let adults and children fire machine guns into the water, according to an article in the "Greenwich Time".

Island Beach has changed over the decades. The bathhouse once on the island's eastern shore is gone, and erosion is slowly eating away at the beaches themselves, a longtime resident told the newspaper.

A single-visit beach pass for non-residents to Greenwich Point (locally termed "Tod's Point" after the previous private owners), which is on a peninsula and so includes picnic areas, a beach and small marina, is $10 per person and $20 per car. Tickets must be purchased at the town hall or the Eastern Greenwich Civic Center. However, anyone can go to the point for free between November and April. The point has one of the most stunning views on the shoreline, including views of , the bridges connecting and and newly-built hi-rises in .

There is also a community sailing center and rental area located in the park. Bicycling and rollerblading are popular sports on the trails and paths in the summer.

The town owns the Griffith E. Harris golf course. The 18-link course is named after "Griff" Harris, first selectman from 1952 to 1958. There are also five country clubs in town with golf courses. The Rink is also in town.

* [http://www.greenwichsym.org/ Greenwich Symphony Orchestra] . Begun in 1958 as the Greenwich Philharmonia, it became fully professional by 1967. The orchestra's 90 members perform at the Dickerman Hollister Auditorium at Greenwich High School. It also performs a pops concert in the summer. Emanuel Ax, Barry Douglas, Pamela Frank, John O’Conor, Peter Serkin, and Dawn Upshaw. David Gilbert has been music director and conductor since 1975 and is also the director of the Bergen (NJ) Philharmonic and the Senior Concert Orchestra of New York. He lives in Nutley, N.J.
* [http://www.greenwichchoralsociety.org/ Greenwich Choral Society] , founded in 1925, has performed locally and elsewhere, including in New York City (at St. Patrick's Cathedral, Carnegie Hall, St. Thomas Church, and the Cathedral of St. John the Divine), and Europe. It has also performed several times with the Greenwich Symphony, New Haven Symphony, New Haven Chorale, and Stamford Symphony, as well as at the Ives Festival in Danbury. The chorus previewed Dave Brubeck's "La Fiesta de la Posada," and has commissioned works by James Furman, Stephen Paulus, Rob Mathes, and Michael Schelle. In 2000 the chorus premiered a work by , "Songs of Innocence," commissioned especially for the 75th anniversary season. The current music director and conductor is Paul F. Mueller. Notable past conductors include Lowell Beveridge, Jack Ossewaarde, Vernon de Tar, Louie L. White and Richard Vogt. [ [http://www.greenwichchoralsociety.org/history.html Society history] Greenwich Choral Society website, accessed on , ]
*The Bruce Museum is a town-owned institution with sections devoted to art and natural history.

Media based in town

The town is served by the 's (the four stations, from west to east, are Greenwich, Cos Cob, Riverside, and Old Greenwich) and is approximately a 40 minute ride to in on the express train and a 50 minute ride on the local. stops in the adjacent city of Stamford.

Interstate 95 (one of the busiest highways in the world) goes through the southern end of town, and there are four exits from I-95 in Greenwich, exits 2 through 5. The (also known as East or West Putnam Avenue or simply Route 1) also goes through town, as does the , although the Merritt Parkway is a considerable distance from the downtown area.

Two bridges in Greenwich were among 12 in the state listed in "critical" condition by state safety inspectors as of August 2007. The Riversville Road bridge, built in the 1950s, now has a weight limit of 3 tons, but as of , , the bridge had not been inspected in over two years (in March 2005), according to state records obtained by "", although a state official said the bridge was inspected in August 2005 and would be inspected again in August 2007. In the March 2005 inspection, the bridge's above-ground structure was deemed to be in critical condition, with other components in poor condition. The Bailiwick Road bridge in town was closed in April 2007 and remained closed as of August 2007 due to storm damage. The ratings for the two bridges were worse than the Interstate 35W bridge in Minneapolis, which collapsed during rush hour on , . [Kaplan, Thomas, Martineau, Kim, and Kauffman, Matthew, "12 state bridges are judged to be in critical condition" article in "The Advocate" of Stamford, , article reprinted from "", , , pp1, A6]

There were 23,230 households out of which 33.5% had children under the age of 18 living with them, 59.4% were married couples living together, 8.0% had a female householder with no husband present, and 30.1% were non-families. 24.8% of all households were made up of individuals and 9.9% had someone living alone who was 65 years of age or older. The average household size was 2.60 and the average family size was 3.12.

Both the Official AENGLC Wealth Value and the CPR AENGLC Wealth Value show Greenwich as having the highest wealth value in Connecticut at over $430,000 per person. Greenwich was the highest income place with a population of 50,000 or more in 2000. However, using the list of the 100 richest places in the United States with at least 1,000 households yields a different result. This is the most common list used for referring to the richest communities in the country, as it eliminates any places with insignificant populations. On this list Greenwich ranks 56th after New Canaan at 32nd, Darien at 44th, and Weston at 55th. See .

The median price for a single-family home in town was $1.7 million in 2006, when about 140 properties sold for $5 million or more, according to Prudential Connecticut Realty. In 2007, the highest asking prices for residential property in town were $39.5 million for the 76 acre estate of actor on Old Mill Road, $19.7 million for a convert|13000|sqft|m2|sing=on mansion on convert|8.7|acre|m2 with a private lake, and $38 million for an estate with formal gardens and a greenhouse the size of a cottage. [Crenson, Sharon L., "Gibson selling Greenwich estate for $39.5M", Bloomberg News, article appeared in "The Advocate" of Stamford, , , , pA2]

Due to its affluence and convenient location near New York City, Greenwich has long been associated with or has been home or birthplace to well-known people in various fields.