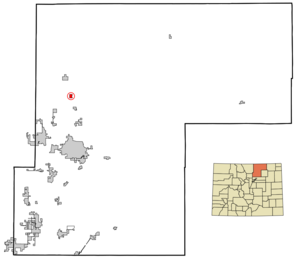 Pierce is a Statutory Town in Weld County, , . The population was 884 at the 2000 census. The town is a rural agricultural community located on the along north of Greeley. It was founded in 1869 and incorporated in 1918. It was named in honor of John Pierce, then president of the , in anticipation of the construction of an extension of the Union Pacific line southward into Colorado. The following year in 1870 it became a watering stop for s on the newly built . A box car was used as the first town post office, depot, and telegraph office. A depot was constructed in 1905 and demolished in 1963. As a railroad stop, it became a local shipping point for , , es, beans, and s. The town underwent a decline in population (from 1,000 in 1976) and its economic base during the latter 20th century with the construction of highways that allowed more direct shipping of agricultural products. The town today consists of a small grid of gravel streets, with one paved thoroughfare (Main Street) west of U.S. Highway 85. The principal businesses in town include a , as well as a grocery store, tavern, and other businesses along Main Street. The town also has a school, a volunteer fire station, a church, and a town park.

There were 312 households out of which 39.4% had children under the age of 18 living with them, 62.8% were married couples living together, 11.5% had a female householder with no husband present, and 19.9% were non-families. 17.0% of all households were made up of individuals and 4.8% had someone living alone who was 65 years of age or older. The average household size was 2.83 and the average family size was 3.15.

* The opening scene of the 2000 science fiction film takes place in Pierce, Colorado.