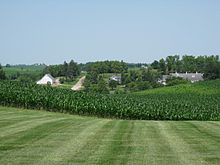 View of the Maytag Dairy Farms from the visitor center

Maytag Dairy Farms is a manufacturer of blue cheese and other cheeses based in Newton, Iowa. It was established in 1941 by Frederick Louis Maytag II.

The farm got its start when Elmer Henry Maytag, son of Maytag Corporation founder Frederick Louis Maytag I, formed a dairy farm in 1919 to produce milk for the family and company. [1]

In the early 1940s, Frederick Louis Maytag II with his brother, Robert Maytag, created a cheese plant and storage caves on the farm to take advantage of a process developed by Iowa State University researchers to make blue cheese out of cow's milk instead of traditional sheep's milk. On October 11, 1941, the first wheels of Maytag Blue Cheese were formed. [2]

Maytag Dairy Farms is now owned by eleven members of the Maytag family and is no longer connected with the Maytag Corporation. The dairy produces approximately one million pounds of blue cheese per year and its annual gross sales total $5 million.