The term Melkite, also written Melchite, is used to refer to various Byzantine Rite Christian churches and their members originating in the Middle East. The word comes from the Syriac word malkāyā (Syriac: ܡܠܟܝܐ), and the Arabic word Malakī (Arabic: ملكي‎, meaning "royal", and by extension, "imperial").[1] The majority of Melkites are of Greek, Early Christian (Jewish Christian, Syro-Phoenician, Syrian), and Aramaic/Syriac (Syriac Christians) ethnicity and heritage. 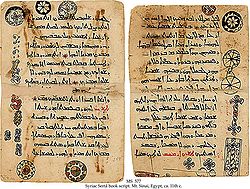 The term Melkite was originally used as a pejorative term after the acrimonious division that occurred in Eastern Christianity after the Council of Chalcedon (451). It was used by non-Chalcedonians to refer to those who backed the council and the Byzantine Emperor (malko and its cognates are Semitic words for "king"). It is unknown at what period the Melkites began to use the term for themselves. The Melkites were generally Greek-speaking city-dwellers living in the west of the Levant and in Egypt, as opposed to the more provincial Syriac- and Coptic-speaking non-Chalcedonians. The Melkite Church was organised into three historic patriarchates — Alexandria, Antioch and Jerusalem — in union with the Patriarch of Constantinople. The non-Chalcedonians set up their own patriarchs in Alexandria (Coptic Orthodox Church) and Antioch (Syriac Orthodox Church). The Nubian kingdom of Makuria (in modern Sudan) in contrast to their Non-Chalcedonian Ethiopian Orthodox neighbours, also practiced the Melkite faith, from c. 575 until c. 1300.

From 1342, Roman Catholic clergy were based in Damascus and other areas, and worked toward a union between Rome and the Orthodox. At that time, the nature of the East-West Schism, normally dated to 1054, was undefined, and many of those who continued to worship and work within the Melkite Church became identified as a pro-Western party. In 1724, Cyril VI was elected by the Synod as Patriarch of Antioch. Considering this to be a Catholic takeover attempt, Jeremias III of Constantinople imposed a deacon, the Greek monk Sylvester to rule the patriarchate instead of Cyril. After being ordained a priest, then bishop he was given Turkish protection to overthrow Cyril. Sylvester's heavy-handed leadership of the church encouraged many to re-examine the validity of Cyril's claim to the patriarchal throne. The newly elected Pope Benedict XIII (1724–1730) also recognised the legitimacy of Cyril's claim and recognized him and his followers as being in communion with Rome. From that point onwards, the Melkite Church was divided between the Orthodox, who continued to be appointed by the authority of the Patriarch of Constantinople until the nineteenth century, and the Catholics, who recognize the authority of the Pope of Rome. However, it is now only the Catholic group who continue to use the title Melkite; thus, in modern usage, the term applies almost exclusively to the Arabic-speaking Greek Catholics from the Middle East.