The College of Architecture, Art, and Planning (AAP) at Cornell University was established in 1871 as the School of Architecture with the hiring of Charles Babcock as the first Professor[2] creating the first four-year course of study in architecture in the United States. Its first student, William Henry Miller, dropped out, but later designed many iconic buildings on campus including Risley Hall, Uris Library and its adjoining McGraw Tower, the presidential mansion (today known as the A.D. White House), and Boardman Hall, the original home of the Law School. It is currently the smallest of the seven undergraduate colleges and schools, with an undergraduate enrollment of 547 and a faculty over 60.[3][4] The college is divided into three departments: Architecture, Art and City and Regional Planning. In 2008, AAP was the most selective of the university's seven colleges, admitting only 15.48% of applicants.

Cornell University's architecture department is one of the world's most highly regarded and prestigious schools of architecture and is the only department in the Ivy League to offer the Bachelor of Architecture degree. The journal DesignIntelligence has consistently ranked Cornell's undergraduate architecture program as No. 1 or No. 2 in the nation in its annual "America's Best Architecture & Design Schools" issue.[5][6] The department has one of the highest endowments of any architecture program, including a $20 million endowment by Cayuga County resident Ruth Price Thomas in 2002.[citation needed] Among its alumni are such pre-eminent architects as Richard Meier, B.Arch. '56, designer of the Getty Center in Los Angeles, and Peter Eisenman, B.Arch, '55, founder of the Institute for Architecture and Urban Studies in New York City. 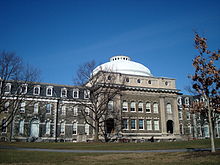 The college occupies four buildings on the northern end of the Arts Quad. Located in Sibley Hall are the Urban and Regional Studies Department, the Architecture Departments, the Rome Program, and the Office of the Dean. The Dome of Sibley Hall holds the Fine Art Library. The Green Dragon Cafe and student lounge can be found in the basement.

Tjaden Hall is used by the Department of Fine Arts. It houses painting, drawing, photography, and lithography studios. It also contains the art department main office and faculty offices. Rand Hall is home to studios and classrooms of the Department of Architecture. In fall 2011, Rand Hall is expected to be incorporated into Milstein Hall, a new building sponsored by the family of Paul Milstein to be designed by award-winning architect Rem Koolhaas.

Located directly behind Sibley, Milstein Hall features a prominent cantilevering structure, which will accommodate additional space for the College’s facilities. The LEED certified building would also provide an array of other features such as a stepped auditorium space for presentations and meetings as well as a sunken garden. Design for the building was a grueling process, with several architects and a constantly delayed schedule. At the urging of the National Architectural Accreditation Board, a final design was selected and its progress can be followed via a live webcam at the Cornell Architecture, Art, and Planning website.

The College of Architecture, Art, and Planning runs several off-campus programs. The most prominent of these is the Cornell-in Rome Program in which students from all three disciplines spend one semester in Rome studying ancient to modern practices in architecture, art, and urban planning in classes taught by regular Cornell professors as well as Rome-based experts. The program is housed at the 17th-century Palazzo Lazzaroni off of Largo di Torre Argentina. The Department of Planning also offers a winter program on sustainability in Panama, and a summer program on urban development in Brazil. [7]

Additionally, in 2006, the College opened a 5,500-square-foot (510 m2) facility near Union Square in New York City as a work and display space as well as a venue for Cornell events. [8]