Mokotów Prison (Polish: Więzienie mokotowskie, also known as Rakowiecka Prison) is a prison in Warsaw's borough of Mokotów, Poland, located at Rakowiecka 37 street. It was built by the Russians in the final years of the foreign Partitions of Poland. During the Nazi German occupation and later, under the communist rule, it was a place of detention, torture and execution of the Polish political opposition and underground fighters.[1] 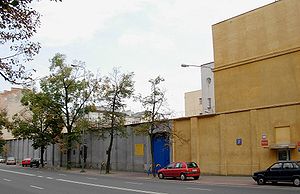 Before and during World War II

The Mokotów prison was built in early 20th century by the Russian forces, and used by security and criminal police of Warsaw (see also: Tsarist Citadel in the Żoliborz district). After Poland regained her independence in 1918, the site was refurbished and until World War II, served as the main prison facility of the Polish attorney general's office.

After the Invasion of Poland (1939), the prison became part of the German District of Warsaw, in the borough, reserved for the German administration of the General Gouvernment and the Nazi occupational army. The prison was one of several prisons of the Gestapo in Warsaw. It housed Polish politicians, freedom fighters, resistance workers and ordinary people caught in łapankas on the streets of Warsaw. The site became infamous due to constant torture of the inmates. It was known as one of the places of no return (Nacht und Nebel), from which the only way out was to the execution site, or to German concentration camp. It was also a place of detention of innocent hostages, taken by Germans as punishment for actions by the Home Army. Later they were killed in mass executions announced publically.

During the first hours of the Warsaw Uprising of 1944, the prison was attacked from the outside by the WSOP platoon of the GRANAT group of Home Army. The partisans successfully broke into the prison and liberated approximately 300 inmates. However, they did not manage to capture entire prison and were soon counter-attacked by the SS forces stationed nearby and forced to retreat. As a reprisal, the SS and Wehrmacht murdered approximately 500 inmates still kept in wards. Until the end of the uprising both the prison and the area of Rakowiecka street were held by the Germans, despite numerous attacks by the Home Army. After the Uprising the German District was spared the fate of the rest of Warsaw and survived the war in a relatively good condition.

In 1945, when the Red Army finally entered the ruins of Warsaw – abandoned by the German troops – the prison was turned into a site of detention for Nazi Germans, as well as Poles who crossed the Russian authorities, the NKVD and the local pro-Soviet Urząd Bezpieczeństwa. During the Stalinist years it was one of the best known prisons used by the secret police. The prisoners, kept in tiny concrete cells in inhumane conditions, were subject to interrogation and prolonged physical torture later described by Kazimierz Moczarski in his prison memoirs.[2] Among those held there were German war criminals such as Jürgen Stroop, but also the members of Polish underground, democratic opposition and intelligentsia, who were considered a threat to the regime of the Soviet-controlled communist government of Poland. After several months (or years) of mistreatment the detainees were usually either executed (in the old boiler room) and their bodies disposed of in the dump in Służewiec, or transferred to other prison sites in Poland, including the infamous Montelupich Prison in Kraków, Lublin Castle, and in towns of Wronki, Rawicz, Strzelce Opolskie, Sztum, Fordon and Inowrocław.

Most of the executions of the members of the Democratic opposition were carried out by Staff Sergeant Piotr Śmietański, a notorious full-time UB executioner, nicknamed by the prisoners the "Butcher of the Mokotow Prison." Smetanski is believed to have emigrated to Israel around 1968 according to Chodakiewicz. This information however, is not confirmed by Pawłowicz.[3] Siergiejczyk mentions a different Śmietański, named Józef, who also left Poland in 1968 during the anti-Zionist campaign conducted by PZPR.[4]. All personal data pertaining to Śmietański was removed from official government records, including the Ministry of Defence, and the Prison Services.[5] Historian Jacek Pawłowicz from IPN in his 2008 book about Pilecki claimed that Śmietański died of tuberculosis at the age of fifty.

Among those held and executed in the basement-boiler-room of the Mokotów prison, often maimed and tortured beforehand, were:

After the end of Stalinism in 1956 the prison was officially transferred to the civilian authorities, although it still served as a prison for political prisoners.[6] After Poland regained her independence in the Revolutions of 1989, the prison was transferred to the Polish law-enforcement agencies and currently it serves as a short-term prison for people accused of various criminal offences. In 1998 a memorial plaque was erected on the prison wall to commemorate the 283 known political prisoners executed on Rakowiecka street between 1945 and 1955, as well as hundreds of others whose names and place of burial remain unknown.