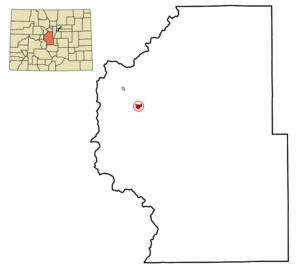 mapsize = 250x200px
map_caption = Location in Park County and the

The historic Town of Fairplay is a Statutory Town that is the and the most populous town of Park County, , .GR|6 Fairplay is located in South Park at an elevation of convert|9953|ft|m|0|sp=us. The town is the fifth-highest incorporated place in the .

The town consists of modern retail businesses along the highway, as well as a historic town on the bluff above the river along Front Street. The northern extension of Front Street along the river has been preserved and has become the site of relocated historic structures as an called , intended to recreate the early days of the Colorado Gold Rush. Most of the residences in town are located on the hillside east of State Highway 9, in the vicinity of the schools and Park County Courthouse. The majority of the streets in town were finally paved in 2005.

The town has become mildly famous in recent years as the town depicted in the "" animated television series on . Although the geographical references contained in several episodes imply that Fairplay is the model for South Park, it is much smaller and more rustic than its fictional counterpart, which has a more character. Co-creator grew up in Conifer and went to high school in Evergreen, both of which are somewhat more affluent mountain communities immediately west of Denver in Jefferson County. Co-creator lived in the Denver suburb of Littleton.

Because the town is a regional center of government and commerce, the term "South Park" has historically been used in the town in the naming of institutions and business, including South Park High School (the namesake of which appears in the series). The elementary school is Edith Teeter Elementary and the middle school is Silverheels Middle School.

Although South Park is based upon the real life town of Fairplay, it is mentioned by in the episode "" and described as "4 miles away" in "", which implies that it is a separate town in the show. The county seat offices in Fairplay are seen, though it is not mentioned by name, in the episode "".

Burro Days is a festival held on the last weekend of July. The event celebrates the town's mining heritage. The main feature of the festival is a 29-mile burro race over rough terrain and elevation gain from downtown Fairplay to the 13,000-ft summit of . Teams consist of one person and one burro. The race takes about five hours to complete; first prize is $1,000. There are several other burro races in Colorado, the most notable takes place in Leadville. The Fairplay race is considered the World Championships of Burro Racing. For many years (in the 1960s and early 1970s) the Burro race took place from Leadville to Fairplay, or vice versa, crossing over Mosquito Pass. This followed the route that used for carrying mail and his preaching circuit. With time the rivalry between the two cities proved the demise of this cooperative endeavor. A South Park parallel to the Burro race can be found in the episode.

There were 259 households out of which 31.7% had children under the age of 18 living with them, 51.0% were married couples living together, 7.7% had a female householder with no husband present, and 34.4% were non-families. 25.9% of all households were made up of individuals and 3.9% had someone living alone who was 65 years of age or older. The average household size was 2.36 and the average family size was 2.79.