Cyprus in the Eurovision Song Contest 2004

Cyprus in the Eurovision Song Contest 2004

Cyprus was represented by Lisa Andreas and the song "Stronger Every Minute", with music and English lyric by Mike Connaris, and Greek lyric by Matheson Bayley and Andrew Adams. The Cypriot National Final was held on February 17, 2004, hosted by Loukas Hamatsos who participated in the 1990 and 1993 Cypriot finals,with the winner being chosen by an "expert" jury (40%) and televoting (60%).On January 25, an internal jury selected 10 songs that made it to the final. 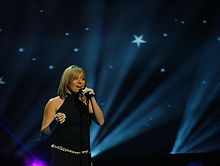 At Eurovision, Lisa Andreas came in 5th place in the semi-final,behind Serbia & Montenegro, Ukraine, Greece and Albania. Andreas repeated this success in the final, coming in equal 5th with Sweden, behind Ukraine, Serbia & Montenegro, Greece and Turkey, its equal highest placing ever to date in the Eurovision Song Contest (the other times being in 1982 with Anna Vissi and 1997 with Hara&Andreas Constantinou). Cyprus also received its most ever points in one contest (170 points from 32 countries).

Cyprus also won a Marcel Bezençon Award. Mike Connaris (lyricist and composer) walked away with the first ever Composer Award for his composition of Cyprus' entry.

Cyprus did not receive points from

Bosnia and Herzegovina or