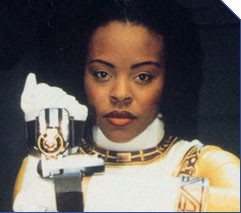 When the evil reversed time and rendered all the Power Rangers as helpless children, they were sent through time to collect the fragments of a mystical item called the . The current Yellow Ranger, , traveled to , where she encountered the young Tanya Sloan. Though she found her Zeo Subcrystal, Aisha wished to stay in Africa to help sick animals, so Tanya agreed to return to the present in her place. According to a November 1995 promo sheet for Alien Rangers/Power Rangers Zeo, Tanya's original name was Kenya.

When the five Zeo Subcrystals were finally reunited, and Master Vile's tampering with time was undone, Tanya discovered that she had grown to along with the other Rangers. Being the most inexperienced of the group, it was briefly considered that Aisha's Zeo Powers would go to ; however, he declined and Tanya became the Yellow Zeo Ranger.

Tanya began her tour of duty as one of the newest members of the Power Rangers team while having to cope with the invasion as well as having her world turned upside down by leaving her time period and entering the Angel Grove of the 1990s as an orphan. To help her cope with her temporal displacement, the Pink Zeo Ranger convinced her parents to adopt Tanya.

Luckily, Tanya adapted quickly to her new lifestyle and began to learn from and . She joined the Angel Grove High team as a . She was also an excellent singer, and her summer job as a caught the interest of a recording company. Presumably, she accepted their recording contract upon retiring as a Power Ranger.

It was eventually revealed that her real parents had been explorers, who had left her in Africa while they went searching for the "Lost Tiki of Auric" on the fabled Mysterio Island. After receiving a letter from her old tribe and Aisha, she managed to find and rescue them. She learned that the "Lost Tiki" was in fact the form of the ancient hero, , whose care she placed in the hands of , who was serving as the Gold Zeo Ranger at the time.

When the evil Space Pirate Divatox threatens to raise a powerful monster named Maligore to marry her, Tanya, along with the other rangers, accept new Turbo powers and becomes the Yellow Turbo Ranger, and gains the Dune Star Turbozord.

Tanya continued to fight against Divatox, but then she and the other Ranger veterans passed on their powers to worthy successors. Tanya selected as her replacement the Angel Grove , , to continue on as the Yellow Turbo Ranger.