The City of Fruita (pronounced /ˈfruːtə/) is a Home Rule Municipality located in the western part of Mesa County, Colorado, United States. It is part of the Grand Junction Metropolitan Statistical Area and within the Grand Valley. The geography is identified by the bordering Colorado River (historically known as the Grand River) on the southern edge of town, the Uncompahgre Plateau known for its pinyon-juniper landscape, and the Book Cliffs range on the northern edge of the Grand Valley. It is located 18 miles (29 km) east of the Utah border near the 39° parallel. The population was 11,535 at the 2008 census. Originally home to the Ute people, white farmers settled the town after founder William Pabor in 1884. Ten years later, Fruita was incorporated.

Economically, it started out as a fruit producing region, however today it is well known for its outdoor sports such as mountain biking, hiking, and rafting, its proximity to the Colorado National Monument, and its annual festivals. Fruita has been the winner of the Governor’s Smart Growth and Development Award for four consecutive years. The city motto is "Honor the Past, Envision the Future".

Fruita has had steady population growth for over a century, with descendants of many of the original pioneers still living in the area. The first permanent homesteaders in the Fruita area were possibly Mr. and Mrs. Albert Lapham who settled in late 1882. They resided in a pre-existing cabin with a dirt floor and a blanket door. They were followed by other settlers, nearly all of whom were farmers of one sort or another. The present day town was established on May 1, 1884 by William E. Pabor, when he formed the Fruita Town and Land Company. In 1886, for the cost of $500 a farmer could buy five acres, 200 fruit trees and water. Pabor recognized the great promise of the Grand Valley and penned a 300-page volume, “ Colorado as an Agricultural State ,” in which he spoke of the fruit growing potential of this area. Having worked with the Horace Greeley Union Colony, he founded the town in a similar way, including the provision that no liquor was sold or manufactured in the town. This provision lasted until it was voted out in the late 1970s.

The original town site was planned for eighty acres with a park in the middle. The first water reached the town from the Colorado River in 1907. By 1909, the town center was linked with electricity. In the 1930s, Fruita participated in several government projects including the Grand Valley Resettlement Project (later Western Slope Farms). Settled in groups of two or three families per area, thirty-four families were relocated by 1937. Later, the Rural Electrification Project brought electricity to around 800 to 900 farms. Fruita also had a Civilian Conservation Corps, several Works Progress Administration projects including the town library (now the Chamber of Commerce), a federal loan for the new central school (now the Civic Center) and the construction of the spectacular Rim Rock Drive to the top of the Colorado National Monument, elevation 8,000 feet.[6] Today, the historic activities of Fruita are supported by the efforts of the Fruita Historic Preservation Board and the Lower Valley Heritage Chapter. 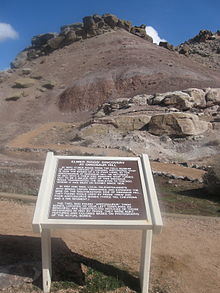 In 1900, palentologist Elmer Riggs and crew, from the Field Museum of Natural History in Chicago, found the first known Brachiosaurus altithorax at Dinosaur Hill located off State Highway 340in Fruita. Led here by communications with Dr. S.M. Bradbury of Grand Junction, Riggs had heard that ranchers had been collecting fossils around the area for 20 years. In 1901, Riggs and crew found nearly two thirds of a specimen of Apatosaurus excelsus skeleton (commonly known as a Brontosaurus) on the northeast side of the hill. This is still considered to be one of the finest specimens known. Later, Diplodocus bones were also found, which eventually led to the landmark's name. The animals were from the late Jurassic Age (150 million years ago) and within the 600 feet (180 m) thick Morrison Formation.[7]

Fossils of the Fruitadens (Genus: heterodontosaurid dinosaur), the world's smallest known plant-eating dinosaur, was first found in the Fruita Paleontological Area (within the McInnis Canyons National Conservation Area) off Kings View Road in the 1970s and 1980s. The name means "Fruita tooth". There is a replica on display at the Dinosaur Journey Museum. The museum is a part of the Museum of Western Colorado and has information on local archeology, paleontology, and geology.

The region is within the Dinosaur Diamond Scenic Byway and includes two other nearby dinosaur-related sites: Mygatt-Moore Quarry and Trail Through Time off Interstate 70 exit 2.

The stone cottage building located at 432 East Aspen Street was built in 1938 by the Works Progress Administration. Originally built as the Fruita Museum in order to house geological displays, it has served as the home of the Fruita Times, the town library (1948–1996), and is currently in use by the Fruita Area Chamber of Commerce. Owned by the City of Fruita, it has been on the National Register of Historic Places since 1996.[8]

The two-and-a-half-story, Queen Anne Style stone house located on 798 North Mesa Street was built in 1908 by builder A.B. Mahany and first owner Harry Alvah Phillips. It is known locally as the Phillips House and currently run as the Stonehaven Bed and Breakfast. It is bordered by mature cottonwoods, agricultural land, and the Elmwood Cemetery. It is on the National Register of Historic Properties.[8]

The two-story Neoclassical building located on 325 East Aspen Street was built in 1912 with an addition added in 1936. Built by the Works Progress Administration as the Central Grade School. In 1993, city and state funds enabled a major renovation, placing it on the State Register of Historic Properties. It currently is the home to the Fruita Civic Center.[9]

The coldest and hottest months of the year are January and July respectively. The annual average precipitation is 8.81 inches and the average annual snowfall is 13.2 inches. The average annual number of growing days is 145 days. in 2006, the average temperature was 52.2°F (11°C).[11] Fruita experiences an average of 300 days of sunshine per year.

There were 2,447 households out of which 36.6% had children under the age of 18 living with them, 54.6% were married couples living together, 12.4% had a female householder with no husband present, and 29.1% were non-families. 24.3% of all households were made up of individuals and 11.5% had someone living alone who was 65 years of age or older. The average household size was 2.55 and the average family size was 3.04.

The Fruita Community Center opened its doors in January 2011 supporting community recreation such as basketball, elliptical training, exercise classes, indoor and outdoor swimming, running, volleyball, and weight training. It is a city-owned facility and is located on 324 North Coulson Street.

Road biking is also a favorite sport in the high desert climate of Fruita. Many ride the 46-mile (74 km) loop along the Colorado National Monument overlooking the Grand Valley. The Fruita Farms/Highline Lake Loop is also a favorite taking you from town to the lake and back. Heading west on old Highway 6 to Utah is another scenic road ride.

Many common and rare birds can be seen here including ash-throated and gray flycatchers, bald eagles, blue herons, pinyon jays, and peregrine falcons as well as some rare breeds such as red-throated loon and red-necked grebe. The best birding locations are the Colorado River, Colorado National Monument and Highline Lake State Park. The Grand Valley Audubon and the Colorado Birding Society are good sources of local information on birding. See also List of birds of Colorado 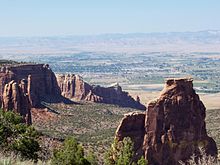 View of Fruita from the Colorado National Monument

The Colorado National Monument is almost 20,500 acres (83 km2) of semi-arid wilderness, rising more than 2,000 feet (610 m) above the City of Fruita. Native wildlife, such as eagles, bighorn sheep, and mule deer can be seen in the area.

The Riverfront Trail system follows the Colorado River through Mesa County through cottonwood groves, wetlands, marshes. It is home to over 200 different species of birds, three endangered species of fish, and an abundance of small animals. The trail project is still in progress and plans to connect Fruita to Palisade via a paved recreation trail. The project is a collaboration of several cities, Mesa County, and state agencies and overseen by the Colorado Riverfront Commission.[15]

Rimrock Rodeo takes place from June through August every Tuesday evening through the Summer. A series of events showcase riders; a “Mutton Busing” Event; and the Professional Rodeo Riders “Grand Entry” Event.

Fruita runners take part in town races such as the July PteRANodon Ptrot, February Sweet Heart Run and others as well as the annual Rim Rock marathon held in November atop the Colorado National Monument. Trail running is also popular and takes place on any of the hiking trails. The Desert RATS Trail Running Festival includes 5, 10, 25, and 50-mile (80 km) trail races in April, as well as the Desert RATS multi-day supported trail race along the Kokopelli's Trail from Loma to Moab.

The city is scattered with public art sculptures some metal, some stone. There are no private galleries, however, several businesses rotate displays of local artists work. Every summer the City of Fruita puts on a summer arts camp for children and adults. The natural landscape and recreation have inspired countless painters, photographers, and sculptures to create works of art. The Fruita Arts & Culture Board supports and advocates for artists and activities in town.

Major music events of the region include the Summer Thursday night concerts, Country Jam and Rock Jam in the nearby town of Mack. Shows also take place during the annual Fat Tire Festival and the Fruita Fall Festival.

There are several active civic groups including the Fruita Lions Club, Fruita Masons, and Fruita Rotary Club, as well as the non-profit Fruita Thrift shop that has been supporting the town's activities for over 50 years.

Single track mountain biking enthusiasts and friends have been celebrating the hundreds of miles of world class mountain bike trails around the area of Fruita and western Colorado at this festival since 1996. The three day fest includes races, live music every evening, a beer garden and legendary parties. Every year at the end of April. [6]

Fruita is known for Mike the Headless Chicken, a rooster who lived for 18 months after his head was cut off. Lloyd Olsen, the remover of Mike's head, continued to give him food and water with an eye dropper. He grew to be almost 8 lb (3.6 kg). Mike went on to tour the country as a side show. A festival in his honor is held each May in Fruita.

Voted Best of the West by The Daily Sentinel's readership in 2001, 2002, 2006, 2008 and 2009, the Fruita Fall Festival is the granddaddy of festivals on the Western Slope.This festival started in 1910 as a harvest festival for the local fruit production industry and has evolved to a major event. It includes three days of events with music, carnival rides, a parade, bed race, baking & canning contest, youth pet and talent show, two stages of music and arts and crafts vendors. The event is celebrated on the last full weekend in September.[16]

Fruita is on Route 8 of the Grand Valley Transit, the operating regional bus transportation system. The bus connects Fruita stops with the Mesa Mall on US Route 6 & 50 at the 24 1/2 Road.

Fruita lies off exit 19 of Interstate 70, along US Route 6 & 50 and at the western end of State Highway 340. The State Highway 139 connects 5 miles (8.0 km) west with the northern city of Rangely and Dinosaur National Monument.

The nearest passenger train station is 11 miles (18 km) southeast located at 339 South 1st Street at the Grand Junction Amtrak station. This station is served by the California Zephyr train. It was originally built by the Denver and Rio Grande Western Railroad.

A Burlington Northern and Sante Fe mainline runs east-west along the city which serves industrial rail use.