A vanity plate or personalized plate (U.S.), prestige plate, private number plate, or personalised registration (UK) or custom plate or personalised plate (Australia and New Zealand) is a special type of vehicle registration plate on an automobile or other vehicle. The owner of the vehicle will have paid extra money to have his or her own choice of numbers or letters, usually forming a recognizable phrase, slogan, or abbreviation on their plate. Sales of vanity plates are often a significant source of revenue for North American provincial and state licensing agencies. In some jurisdictions, such as the Canadian province of British Columbia, vanity plates have a different color scheme and design.

In 2007, the American Association of Motor Vehicle Administrators (AAMVA) and Stefan Lonce, author of License to Roam: Vanity License Plates and the Stories They Tell, conducted North America's first state by state and province by province survey of vanity plates, revealing that there are 9.7 million vehicles with personalized vanity license plates.

According to the Federal Highway Administration, in 2005 there were 242,991,747 privately owned and commercial registered automobiles, trucks, and motorcycles in the U.S., which means that 3.83% of eligible U.S. vehicles have vanity plates.

According to Statistics Canada, in 2006 there were 14,980,046 registered motor vehicles (excluding buses, trailers, and off-road, farm and construction vehicles) in the provinces and territories that issue vanity plates, which means that 2.94 % of eligible Canadian vehicles have vanity plates. 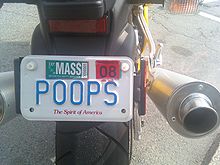 Massachusetts vanity plate on a parked motorcycle in Boston

The survey also found that vanity plates are issued by every state and the District of Columbia, and every province, except for Quebec and Newfoundland and Labrador.

In some states, a motorist may check the availability of a desired combination online.

All U.S. states and Canadian provinces that issue vanity plates have a "blue list" of vanity plates that contains banned words, phrases, or letter/number combinations. The U.S. state of Florida, for example, has banned such plates as "PIMPALA" , while the state of New York bans any plates with the letters "FDNY", "NYPD", or "GOD", among others.[2] Often the ban is to eliminate confusion with plates used on governmental vehicles or plates used on other classes of vehicles. However, a licensing authority's discretion to deny or revoke "offensive" vanity plates is finite. For example, some U.S. motorists have successfully sued their state governments on that issue under the First Amendment to the United States Constitution.[3]

In some cases, a plate that has already been issued can be recalled and stripped from the vehicle's owner if the plate's message is found to be in violation after it has been issued. Some notable cases are:

In the United Kingdom, number plates are issued by the Driver and Vehicle Licensing Agency (DVLA). They do not approve personalized registrations if they contain words which are offensive in any widely used language. The DVLA however lately have released more and more previously banned combinations such as SEX and DAM. UK plates have to match certain very strict letter/number combinations - see Vehicle registration plates of the United Kingdom.

Registrations can be sold, or transferred from one vehicle to another, with some restrictions. Originally the only vanity plates allowed to be transferred were ordinary registrations that had been transferred, but in the 1990s the DVLA began selling personalized registrations unrelated to the registration districts.The trade of number plates was started by private dealers, entrepreneurs who saw an opportunity to sell something in demand.

There is some additional flexibility available by using numbers that resemble letters (e.g., S for 5), or by using large black, yellow or white headed screws to fix the plate to the car to fill in or create a gap (e.g. in the middle of 'H' to make it look like two 1's or I's). However, the font style, size and spacing is mandated by law, making the practice illegal.

Some plates acquire significance only because of particular owners. For example, "COM 1C" was formerly owned by the comedian Jimmy Tarbuck, magician Paul Daniels had "MAG 1C", the 1967 plate "BEL 12E" is owned by the Belize High Commission, and "1 AFG" is owned by the Afghan embassy.

In the UK, there are a large number of private dealers who act as agents selling DVLA registrations, as well as their own stock - often purchased at auction or from private sellers.

A custom plate from Victoria, Australia. 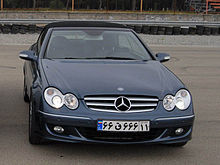 In Australia the various states offer personalised plate schemes, with some states having a yearly fee to maintain the cherished number. In the Australian states of Victoria and Queensland the proceeds from the sale of custom plates and personalised plates go towards road safety activities.

German car registration law does not allow license plates such as these, but it is possible to select the two letters after the district designation and up to four numbers thereafter for a small fee. It is common in Germany for car owners to register license plates with their initials and a year or number of significance to them. For example, a man by the name of Jimmy Wales living in Berlin and born in 1966 might opt to register B JW 1966, providing it is still available.

On November 19, 2007, Dutch MP Paul de Krom proposed that vanity plates be introduced in the Netherlands as well, after having seen them while visiting the United States.[12] One barrier his proposal would have to overcome would be that the RDW (the Dutch vehicle registration authority) links license plates to the actual cars as opposed to their owners.

In Poland there is an option to buy an individual number plate at extra charge. The plate looks the same as the ordinary one, there is a letter showing the country district, then one number and then up to five letters of free choice.

In the United Arab Emirates, regular number plates consist of five digits and one optional character (depending on the emirate). So-called "distinguished plates" have a special combination of digits (12345, 55555, etc.) or less than five digits and are sold at public auctions, the profit of which is used for charities.[13] Very low numbers fetch very high prices, the record being the number one plate from Abu Dhabi, sold for 52.2 million Dirhams (14 million US dollars).[14] In Dubai, plate number one (without additional letter) is registered to the car of Sheikh Mohammed, ruler of Dubai.