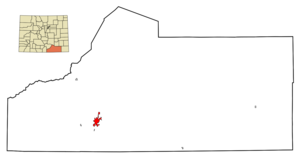 mapsize = 250x200px
map_caption = Location in Las Animas County and the

The historic City of Trinidad is a Home Rule Municipality that is the and the most populous city of Las Animas County, , .GR|6 The estimates that the city population was 9,077 in 2005.

There were 3,701 households out of which 29.5% had children under the age of 18 living with them, 43.6% were married couples living together, 14.5% had a female householder with no husband present, and 36.9% were non-families. 32.7% of all households were made up of individuals and 16.2% had someone living alone who was 65 years of age or older. The average household size was 2.36 and the average family size was 2.98.

For many years Trinidad housed the miners who worked in the mines of the south and west of the town. The coal mines are now closed, but since the 1980s companies have been drilling new gas wells to extract from the remaining coal seams.

Trinidad's location at the foot of , along the between and has always made it a favored route for travellers, first by foot, then horse and ox-drawn wagon, then by railroad. Today Interstate 25, the most highly-travelled route between Colorado and New Mexico, passes through Trinidad.

"Sex Change Capital of the World"

Trinidad has been dubbed the "Sex Change Capital of the World", because a local doctor had an international reputation for performing . In the 1960s, Dr. , a veteran surgeon returning from Korea, decided to move to Trinidad because he had heard that the town needed a surgeon. In 1969 a local social worker asked him if he would perform the surgery for her, which he learned by consulting diagrams and a New York surgeon. Biber attained a reputation as a good surgeon at a time when very few doctors performed the operations. At his peak, Biber was performing roughly four sex change operations a day, and the term "taking a trip to Trinidad" became a euphemism for some seeking the procedures he offered. His surgical practice was taken over in 2003 by .

Trinidad's reputation as the sex change capital has been uncomfortable for some residents, as it is otherwise a socially conservative small town. However, the revenue brought in by Biber was important to keeping the local hospital running, and Biber was himself a respected community leader.Fact|date=February 2007 Biber was also featured in an episode of where elementary school teacher undergoes a sex change operation.

*, famed gunman, was the town of Trinidad for over a year, during the mid-1880s.Fact|date=February 2007 His lesser-known gunman brother Jim Masterson, was town Marshal for a time during the 1880s.
* Rock musician lived in Trinidad during the final years of his life.
* Dancer of television's "" was born in Trinidad and lived there until the age of three.
*, a native, started his long football coaching career while still attending high school in Trinidad and playing on the squad.

* In the "" episode Rendezvous, and are taken to a safe house in Trinidad by Jane, an ex-company agent, and eventually meet with Lincoln's father, Aldo Burrows.