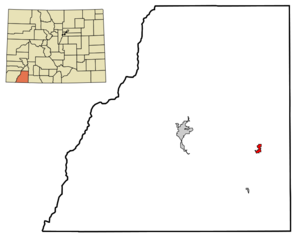 mapsize = 250px
map_caption = Location in La Plata County and the

There were 567 households out of which 43.2% had children under the age of 18 living with them, 59.3% were married couples living together, 8.6% had a female householder with no husband present, and 27.7% were non-families. 22.8% of all households were made up of individuals and 6.0% had someone living alone who was 65 years of age or older. The average household size was 2.71 and the average family size was 3.19.

Entertainment in the area

There are many restaurants in Bayfield, a park where local events are held, and high school sports games, many of which have very small attendance (with the exception of Homecoming week).

There are six parks in Bayfield, one being the Joe Stephenson's park. Another park, Eagle Park, is across the street; it is the venue for many celebrations, such as the Cinco de Mayo. The other parks are Gosney, Little Pine, Mesa, and Roadside.

The high school provides many different types of sports and entertainment; these include soccer, football, volleyball, occasional tennis, jazz concerts, choirs, art gallery, plays, talent shows, conferences, and many other Wolverine Pride events. Bayfield has developed a few bands, comedians, and athletes. One of the bands is History Of.

There is a class, taught by Master Dan Cyr and his wife, 2nd Degree Sandy Cyr. The Pine River Karate Club competes in several tournaments a year, most of them local.

Bayfield High School has drafting and construction classes taught by Curtis Gillespie, winner of a Skills USA Advisor of the year award.

Bayfield has no professional or amateur sports teams outside of its middle and high school programs and some youth programs.

The high school has a football program and an award-winning track team. Wrestling, , , track, and cross-country are the other sports available to boys. Girls, on the other hand, play , soccer, basketball, cross-country and track, and participate in at the state levels. The rivalry between Bayfield's Wolverines and Ignacio's Bobcats, an inholding in the Ute Reservation south of Bayfield, is well-known locally.

In 1996, the football team enjoyed unprecedented successes and won the 3A state football title. Since then, the team has enjoyed only mediocre success. The 2007 season, coached by Marshall Hahn, ended with a 8-2 record, reversing 2006's 2-8 season record.

In 2005, the boys cross country team won the state meet. Led by prolific Steve Flint, the team edged Colorado Springs Christian by one point. Other members of the team were the tandem Jesse and Jake Krueger, Joseph Reimers, Tanner Phelps, Kalen Gantt, and James Sundblom. The team was coached by Mr. Vernon Kimball

Bayfield Wrestling won the 2007 Intermountain League Championships under the leadership of Coach Herb Stinson. Stinson has won National Coach of the Year, and coached numerous state champion teams and individuals. The IML Championship victory was Bayfield's first since 1991.

The 2007 AAA Wrestling Southern Regional Tournament was held in Bayfield. The Bayfield Wolverines were Regional Runner-Up, but had a pair of individual champions in Jordan Larsen and Markus Eckstein

Bayfield and the surrounding area have seen continued growth in commercial and residential activity due to substantially lower real estate costs than Durango, which is located 18 miles to the west. Historically Bayfield was a hamlet serving the surrounding agricultural community. There continues to be a fair amount of agriculture but over the last 15 years Bayfield has transitioned into a for Durango. Bayfield is now trending toward a more self sufficient community as more of the regional work force lives in the eastern part of La Plata County and more employers and service providers are locating in Bayfield. production is a substantial component in the local economy with numerous international and regional producers operating in and around Bayfield.