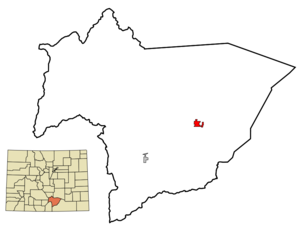 mapsize = 250x200px
map_caption = Location in Huerfano County and the

The historic City of Walsenburg is a Statutory City that is the and the most populous city of Huerfano County, , .GR|6

Robert Ford, the assassin of outlaw , operated a saloon/gambling house in Walsenburg, and his home at 320 West 7th Street still stands.

The Spanish Peaks Medical Center is located two miles (3 km) west of Walsenburg on US-160 opposite the entrance to Lathrop State Park. The Center offers "two hospitals in one:" a state-operated veterans retirement home and a community hospital that serves the area.

Walsenburg has transformed itself in recent years with the revitalization of its downtown area, led by the efforts of Richard McEntee and Marti Henderson and many other local businesses who have joined together to revitalize this historic and scenic community. The historic Fox Theater restored by George Bierrer offers first run movies and concerts and other events.

Lathrop State Park, located just convert|2|mi|km west of the city limits of Walsenburg, is the State of Colorado's first State Park and is over convert|1600|acre|km2 in size. Two lakes, Martin Lake and Horseshoe Lake offer gold medal fishing, stocked by the State of Colorado (Division of Wildlife of the Department of Natural Resources), water skiing, boating, jet skiing, hiking, camping and is the only State Park in Colorado with a golf course.

The natural beauty of the area begins with the majestic Spanish Peaks, a national landmark and named one of Colorado's Seven Wonders by the Denver Post. The Highway of The Legends, connecting Walsenburg with La Veta, other historic mining towns, and Trinidad, is a National Scenic and Historic Byway,

The Walsenburg Golf Course is a 9 hole public golf course in a spectacular setting that is open for play year round due to the mild "banana belt" weather that exists most of the year. The City recently opened (May 27, 2007) a two-million dollar water park, "Walsenburg Wild Waters" after efforts by former mayor Maurice Brau and the City Council.

On July 20, 2007 the City of Walsenburg proclaimed the day: Don Ho/Waikiki BeachBoy Day and welcomed 13 Hawaiians who traveled to Walsenburg from Hawaii as the guests of local citizen/developer Richard McEntee. The Don Ho/Waikiki Day proclamation was personally delivered to Honolulu Mayor Mufi Hannemann in the Mayor's office in Honolulu, by Richard McEntee on July 11, 2007.

The led by Frank Manuma, Harry Makalena, Lionel Haile, George Aio, Sam Hono'kano, Bruce Sharsh, Peter Kama and others performed a concert at the new water park Walsenburg Wild Waters raising over $20,000.00 for the youth of Walsenburg. The State Flags of Colorado and Hawaii were exchanged and flown over the state capitols in Honolulu and Denver. Sponsored by Colorado Senator Ken Kester and Hawaii Hawaii Rep. Gene Ward. Hawaii Rep. Barbara Murumoto issued "Spirit of Aloha" proclamations to The City of Walsenburg, Colo. Sen. Kester and Richard McEntee that were signed by Hawaii Rep. Barbara Murumoto and Hawaii Speaker of the House Calvin Lay. Hawaii Gov. Linda Lingle also signed a proclamation validating the Hawaii State flag. It was a great cultural exchange between Walsenburg and Hawaii that will be treasured for many years to come. Plans call for another Hawaiian Don Ho/Waikiki Beachboy Day in 2008.

Over 3.6 million cars a year pass through this "Gateway to the Southwest" and travel and tourism are important to the local community.

The City of Walsenburg traces its history back about 150 years. The settlement was first established as La Plaza de los Leones on the north side of the Cuchara River by Don Miguel Antonio Leon and a family named Atencio. In 1870, Fred Walsen settled nearby and opened up his large mercantile, making the town an attractive location for German settlers. After Fred assisted in the incorporation of the town's convert|320|acre|km2|sing=on site, it was suggested that he be honored by formally naming the new town "Walsenburg". In 1876, Walsen also opened the area's first coal mine, and the development of the town was influenced for a century by coal mining in the region. An estimated 500 million tons of coal was mined until a combination of corporate mergers, environmental regulations, and enforcement of mine safety regulations led to the closure of virtually all mining in the area.

There were 1,497 households out of which 25.9% had children under the age of 18 living with them, 41.1% were married couples living together, 13.8% had a female householder with no husband present, and 41.1% were non-families. 37.3% of all households were made up of individuals and 19.4% had someone living alone who was 65 years of age or older. The average household size was 2.25 and the average family size was 2.95.