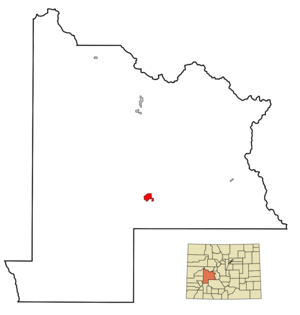 mapsize = 250x200px
map_caption = Location in Gunnison County and the

The historic City of Gunnison is a Home Rule Municipality that is the and the most populous city of Gunnison County, , .GR|6 As of the , the city had a total of 5,409. The city was named in honor of , a officer who surveyed for the transcontinental railroad in 1853.

Gunnison is the home of . The serves the valley and nearby with both commercial and flights.

Gunnison is located at the bottom of several s. Due to its location in the , cold air in all the valleys settles into Gunnison at night, making it one of the coldest places in winter in the United States, especially when snowpack is present. The average January low is -7°F , and the average July high is 81°F . The record low is -47°F set on , . The record high is 98°F, set on , . [http://www.wrcc.dri.edu/cgi-bin/cliGCStT.pl?cogunn]

The city typically experiences moderate snowfalls, with an average of 50 inches per year. Early fall and late spring snows are not uncommon and snow can remain on the ground in town from as early as November to as late as April. Surrounding mountains experience very heavy snowfall with longer periods of snow on the ground. Many locations average 300-400 inches of snow annually. The snow is welcome to the area, as it is beneficial to water supplies and local ski resorts. Total liquid precipitation averages nearly 11 inches per year in the city of Gunnison, while surrounding mountains may receive anywhere from 15 to over 40 inches annually, depending upon elevation and local topography.

After the killing of Curley Bill, the Earps left Arizona and headed to Colorado. In a stop over in Albuquerque, New Mexico, Wyatt and Holliday had a falling out but remained on fairly good terms. The group split up after that with Holliday heading to Pueblo and then Denver. The Earps and Texas Jack set up camp on the outskirts of Gunnison, Colorado, where they remained quiet at first, rarely going into town for supplies. Eventually, Wyatt took over a faro game at a local saloon.

Slowly all of the Earp assets in Tombstone were sold to pay for taxes, and the stake the family had amassed eroded. Wyatt and Warren joined Virgil in San Francisco in late 1882. While there, Wyatt rekindled a romance with Josie Marcus, Behan's one-time fiancée. His common-law wife, Mattie waited for him in Colton but eventually realized Wyatt was not coming back (Wyatt had left Mattie the house when he left Tombstone). Earp left San Francisco with Josie in 1883 and she became his companion for the next forty-six years (no marriage certificate has been found). Earp and Marcus returned to Gunnison where they settled down, where that state’s governor refused to extradite Wyatt back to Arizona on the grounds that he could not get a fair trial, and Earp continued to run a faro bank.

Gunnison isolated themselves from the surrounding area during the epidemic for two months at the end of 1918. All highways were barricaded near the county lines. Train conductors warned all passengers that if they stepped outside of the train in Gunnison, the would be arrested and quarantined for five days. As a result of the isolation, no one died of influenza in Gunnison during the epidemic.

According to the , the city has a total area of 3.2 s (8.3 ). All of it is land and none of it is covered by water. Gunnison is near both Taylor Reservoir and Spring Creek Reservoir. One can travel to Gunnison from the towns of Salida and Buena Vista by going over .

There were 2,083 households out of which 21.1% had children under the age of 18 living with them, 32.3% were married couples living together, 7.6% had a female householder with no husband present, and 56.6% were non-families. 32.8% of all households were made up of individuals and 6.9% had someone living alone who was 65 years of age or older. The average household size was 2.17 and the average family size was 2.83.

Gunnison is the setting of the film "", although the film was actually shot in the towns of and , .