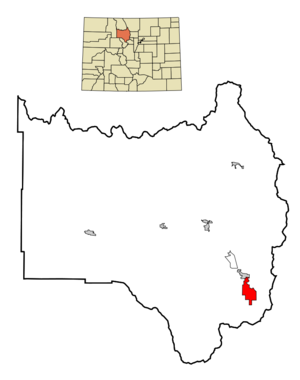 mapsize = 250px
map_caption = Location in Grand County and the state of

Winter Park is a Home Rule Municipality in Grand County, , . The town population was 662 at the 2000 census, although tourists and seasonal workers significantly increase the population.

It is home to the , a well-known which is owned by the City and County of Denver and managed by Intrawest. The town and are served by the of the (D&RGW).

Although the town center is at about 9,000 feet [City of Winter Park official web site, [http://www.winterparkgov.com/] . Retrieved February 22, 2007.] , Winter Park is the highest incorporated town in the after the July 2006 annexation of convert|5214|acre|km2 of to allow new on-mountain improvements. This claim is disputed since there are no residences or businesses at or above the elevation of (10,361 feet).

The area also has abundant opportunities, including Devil's Thumb Ranch. In the spring and summer, Winter Park is known for mountain biking, concerts, hiking and fishing.

It is approximately 9100-12,060 feet above sea level, and is considered sub-alpine country. It is completely snow-covered for about six months a year.

There were 318 households out of which 14.8% had children under the age of 18 living with them, 33.3% were married couples living together, 5.0% had a female householder with no husband present, and 59.4% were non-families. 38.4% of all households were made up of individuals and 4.4% had someone living alone who was 65 years of age or older. The average household size was 2.04 and the average family size was 2.67.

Winter Park began as two small settlements, Old Town and Hideaway Park. Old Town came into existence because of the construction taking place on the . Hideaway Park was a village that began in 1932 and quickly developed into the fourth town in the valley. Hideaway Park was developed and built by L.O. "Doc" Graves, a merchant in the valley since 1922. Doc began by building 26 tourist cabins and a cafe and service station called "Doc's Place." He also installed a water wheel on Vasquez Creek to generate all the electricity necessary to operate his business. The village grew rapidly, considering that the entire country was in the depth of a serious depression at that time. The construction of a water tunnel parallel to the existing Moffatt railroad tunnel had a positive effect on the local economy. Over a stretch of two years, the village added three more businesses — a saloon, a garage, and a nightclub — and nearly doubled in population.

Most recently, the ghost town of Arrow, at the western base of , was annexed into the town; this marked the beginning of the massive Arrowhead development.