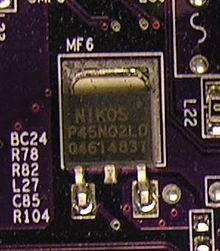 The field-effect transistor (FET) is a transistor that relies on an electric field to control the shape and hence the conductivity of a channel of one type of charge carrier in a semiconductor material. FETs are sometimes called unipolar transistors to contrast their single-carrier-type operation with the dual-carrier-type operation of bipolar (junction) transistors (BJT). The concept of the FET predates the BJT, though it was not physically implemented until after BJTs due to the limitations of semiconductor materials and the relative ease of manufacturing BJTs compared to FETs at the time.

Main article: History of the transistor

FETs are majority-charge-carrier devices. The device consists of an active channel through which majority charge carriers, electrons or holes, flow from the source to the drain. Source and drain terminal conductors are connected to semiconductor through ohmic contacts. The conductivity of the channel is a function of potential applied to the gate.[2][3]

The FET's three terminals are:[4]

Cross section of an n-type MOSFET

All FETs have gate, drain, and source terminals that correspond roughly to the base, collector, and emitter of BJTs. Most FETs also have a fourth terminal called the body, base, bulk, or substrate. This fourth terminal serves to bias the transistor into operation; it is rare to make non-trivial use of the body terminal in circuit designs, but its presence is important when setting up the physical layout of an integrated circuit. The size of the gate, length L in the diagram, is the distance between source and drain. The width is the extension of the transistor, in the diagram perpendicular to the cross section. Typically the width is much larger than the length of the gate. A gate length of 1 µm limits the upper frequency to about 5 GHz, 0.2 µm to about 30 GHz. Also, FET's Are less used than Bipolar transistors.

The names of the terminals refer to their functions. The gate terminal may be thought of as controlling the opening and closing of a physical gate. This gate permits electrons to flow through or blocks their passage by creating or eliminating a channel between the source and drain. Electrons flow from the source terminal towards the drain terminal if influenced by an applied voltage. The body simply refers to the bulk of the semiconductor in which the gate, source and drain lie. Usually the body terminal is connected to the highest or lowest voltage within the circuit, depending on type. The body terminal and the source terminal are sometimes connected together since the source is also sometimes connected to the highest or lowest voltage within the circuit, however there are several uses of FETs which do not have such a configuration, such as transmission gates and cascode circuits.

I–V characteristics and output plot of a JFET n-channel transistor.

The FET controls the flow of electrons (or electron holes) from the source to drain by affecting the size and shape of a "conductive channel" created and influenced by voltage (or lack of voltage) applied across the gate and source terminals (For ease of discussion, this assumes body and source are connected). This conductive channel is the "stream" through which electrons flow from source to drain.

Conversely, in an n-channel enhancement-mode device, a positive gate-to-source voltage is necessary to create a conductive channel, since one does not exist naturally within the transistor. The positive voltage attracts free-floating electrons within the body towards the gate, forming a conductive channel. But first, enough electrons must be attracted near the gate to counter the dopant ions added to the body of the FET; this forms a region free of mobile carriers called a depletion region, and the phenomenon is referred to as the threshold voltage of the FET. Further gate-to-source voltage increase will attract even more electrons towards the gate which are able to create a conductive channel from source to drain; this process is called inversion.

For either enhancement- or depletion-mode devices, at drain-to-source voltages much less than gate-to-source voltages, changing the gate voltage will alter the channel resistance, and drain current will be proportional to drain voltage (referenced to source voltage). In this mode the FET operates like a variable resistor and the FET is said to be operating in a linear mode or ohmic mode.[5][6]

If drain-to-source voltage is increased, this creates a significant asymmetrical change in the shape of the channel due to a gradient of voltage potential from source to drain. The shape of the inversion region becomes "pinched-off" near the drain end of the channel. If drain-to-source voltage is increased further, the pinch-off point of the channel begins to move away from the drain towards the source. The FET is said to be in saturation mode;[7] some authors refer to it as active mode, for a better analogy with bipolar transistor operating regions.[8][9] The saturation mode, or the region between ohmic and saturation, is used when amplification is needed. The in-between region is sometimes considered to be part of the ohmic or linear region, even where drain current is not approximately linear with drain voltage.

The FET can be constructed from a number of semiconductors, silicon being by far the most common. Most FETs are made with conventional bulk semiconductor processing techniques, using the single crystal semiconductor wafer as the active region, or channel.

Among the more unusual body materials are amorphous silicon, polycrystalline silicon or other amorphous semiconductors in thin-film transistors or organic field effect transistors that are based on organic semiconductors and often apply organic gate insulators and electrode. The FETs are manufactured using variety of materials as silicon carbide(Sic),gallium arsenide(GaAs),gallium nitride(GaN),indium gallium arsenide(InGaAs). In June of 2011, IBM announced that it had successfully used graphene-based FETs in an integrated circuit.[10][11] These transistors are capable of a 100 GHz cutoff frequency, much higher than standard silicon FETs [12]. 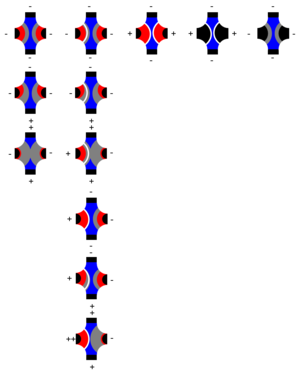 The channel of a FET is doped to produce either an N-type semiconductor or a P-type semiconductor. The drain and source may be doped of opposite type to the channel, in the case of depletion mode FETs, or doped of similar type to the channel as in enhancement mode FETs. Field-effect transistors are also distinguished by the method of insulation between channel and gate. Types of FETs are:

There are two n-type island on p-type substrate. Between these two n regions there is a n-channel. The two n-regions form Source and Drain terminals. Gate terminal is to insulated layer of SiO2. There is conduction without any Gate voltage.

Similar to Depletion type , but without n-channel. Hence for conduction there is requirement of some positive Gate voltage which attracts electrons from p-region which conducts from Source to Drain.

The main advantage of the FET is its high input resistance, on the order of 100M ohms or more. Thus, it is a voltage-controlled device, and shows a high degree of isolation between input and output. It is a unipolar device, depending only upon majority current flow. It is less noisy and is thus found in FM tuners for quiet reception. It is relatively immune to radiation. It exhibits no offset voltage at zero drain current and hence makes an excellent signal chopper. It typically has better thermal stability than a BJT.[4]

It has relatively low gain-bandwidth product compared to a BJT. The MOSFET has a drawback of being very susceptible to overload voltages, thus requiring special handling during installation.[16]

The fragile insulating layer of the MOSFET between the gate and channel makes it vulnerable to electrostatic damage during handling. This is not usually a problem after the device has been installed in a properly designed circuit.

In FETs electrons can flow in either direction through the channel when operated in the linear mode, and the naming convention of drain terminal and source terminal is somewhat arbitrary, as the devices are typically (but not always) built symmetrically from source to drain. This makes FETs suitable for switching analog signals between paths (multiplexing). With this concept, one can construct a solid-state mixing board, for example.

A common use of the FET is as an amplifier. For example, due to its large input resistance and low output resistance, it is effective as a buffer in common-drain (source follower) configuration.