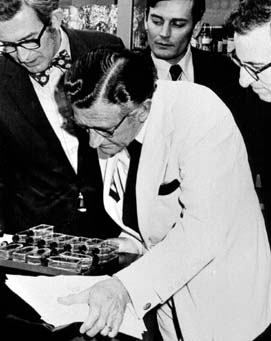 Fountain was educated in the public schools of Edgecombe County and at the where he received his A. B. degree in 1934 and his degree. He was admitted to the North Carolina Bar following graduation from in 1936.

He practiced in and was active in statewide Democratic Party politics until March 1942 when he entered the as a private in the infantry. He rose through the ranks and was released from service as a major in the Judge Advocate General’s Office on , . Fountain then returned to his law practice in Tarboro.In civilian life, he remained a member of the U. S. Army Reserve and later retired as a .

Fountain was appointed by President as a United States Delegate to the 22nd Session in 1967 of the . In this capacity, he served as assistant to United States Ambassador during the Security Council debate following the June 6th Arab–Israeli .

He led the fight in 1978 for the creation of the first independent Presidentially-appointed (“watchdog”) in the former , and worked for the establishment of inspectors general in every key Federal department and agency. Each inspector general plays a significant role in curbing waste, fraud, abuse, and mismanagement in government.

From time to time, he served on various subcommittees of both the Committee on Government Operations and the Committee on Foreign Affairs. For 14 years, Fountain was chairman of the House Foreign Affairs Subcommittee on Near Eastern Affairs. For 28 years he was chairman of the House Government Operations Subcommittee on Intergovernmental Relations. He conducted hundreds of investigations into food and drug safety, and led the effort to create inspectors general in federal departments and agencies.

From 1981 to 1982, he was a member of the Presidential Advisory Committee on . The committee had the responsibility of advising the President on ways to restore proper relationships between federal, state and local governments.

Fountain was a Elder and had a perfect attendance record for more than eighty years. He served as a trustee of the National Church from 1961 to 1964 and again from 1977 to 1980. He was a member of the Executive Committee of the East Carolina Council of the , and was a member of the local and other Bar Associations, the Elks, and Club. He served as lieutenant governor of the Sixth Division of the Carolinas District of Kiwanis International. He was also a and received the Distinguished Service Award (Man of the Year) of the Tarboro Jaycees in 1948.

A lifelong advocate of education, Fountain was a charter member of the Board of Trustees of of Laurinburg from 1955 through 1971. He was reelected to the board in 1972 and served until 1974.

"Congressman L.H. Fountain Highway," a section of which runs through , was named in his memory.