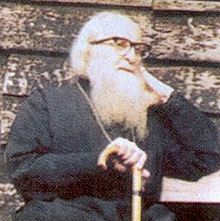 The Patriarchal Stavropegic Monastery of St John the Baptist is a monastic community for both men and women, directly under the Ecumenical Patriarchate. It is located in Tolleshunt Knights, near Maldon, Essex, in England, and is the oldest Orthodox religious community in the UK.

The religious community was founded in 1958 by Elder Sophrony,[1] under the jurisdiction of Metropolitan Anthony, Metropolitan of Sourozh and ruling Russian bishop in England, with six monastics from a number of nations; soon after, in 1965, the Monastery moved under the direct jurisdiction of the Ecumenical Patriarchate.

The community consists of men and women living the monastic tradition of a Christ-centred prayer life. Currently, there are just under 40 monastics in the community, the majority of whom are nuns, with a smaller number of monks.[1]

When founding the monastery, Elder Sophrony wanted to be sure that his community would not just have outward conformity, but have its focus on inner asceticism. The typikon of the monastery, consisting of repetition of the Jesus Prayer for approximately 4 hours per day and Divine Liturgy three or four times per week, found inspiration in Elder Sophrony's experience in the Athonite desert, and precedent in Athonite skete practise, St Nicodemus and St Paisius Velichkovsky.

Also, another distinctive part of this monastery is that it is a double monastery; that is, the community has both monks and nuns. This is rare, but is not unheard of, in Orthodox monasticism.[1]

The Patriarchal Stavropegic Monastery of St John the Baptist had its beginnings largely in the person of Elder Sophrony. After his departure from Mt Athos, where he had been a disciple of Saint Silouan the Athonite, and his subsequent move to Paris, he was to live in a Russian old-people's home, assisting the priest there. Soon, two men would seek out Elder Sophrony, desiring the monastic life. They were allowed to live at the old-people's home, using the repetition of the Jesus Prayer in lieu of liturgical books and eating the food that the old-age inhabitants didn't eat. There were also a few nuns living at the home at this time.[2]

By 1958, Elder Sophrony had six people living around him, seeking the monastic life. Realising that such a situation could not continue, he went to Tolleshunt Knights, near Maldon, Essex, England to inspect a property; in the spring of 1959, the new Community of St John the Baptist was formed at the same property, under Metropolitan Anthony's omophorion. The monastery, from its beginnings, had both monks and nuns, due to Elder Sophrony being unable to oversee two separate communities.[2]

The Monastery of St John the Baptist moved under the omophorion of the Ecumenical Patriarchate in 1959, becoming Patriarchal; later, the monastery would also be titled 'Stavropegic'.

The monastery had been informed that the only way that it could bury people on its property was to build an underground crypt, which it proceeded to build, and to which Elder Sophrony said that he would not repose until the crypt was ready. Then, having been told of the expected completion date of 12 July 1993, Elder Sophrony stated that he "would be ready". On the 11th, Elder Sophrony reposed; and on the 14th his funeral and burial were held, attended by monastics from around the world. Mother Elizabeth, the eldest nun, reposed soon after on the 24th, according to Elder Sophrony's words that he would repose first, and she would repose soon after.[3]

Saturday: 7:00am - Hours and Divine Liturgy

3:00pm - Vespers and Paraklesis, followed by talks in Greek and English

Tuesday: 7:00am - Hours and Divine Liturgy

Feastdays: Vigil on the preceding evening; Hours and Divine Liturgy in the morning.

One of the motivating factors behind Elder Sophrony's move to France was the publishing of St Silouan's books; when Elder Sophrony moved to England, the monastery became the publisher of these works. In 1973, a more complete translation of the life of St Silouan, titled Monk of Mt Athos, was published; followed in 1975 by Wisdom of Mt Athos, a collation of the writings of St Silouan. After this, Elder Sophrony began to publish books of his own, beginning with His Life is Mine in 1977 and then We Shall See Him As He Is in 1985. In 1987, the Holy Synod of the Ecumenical Patriarchate glorified St Silouan the Athonite.

Books published by the Monastery