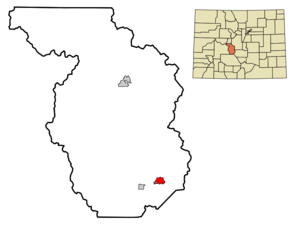 mapsize = 250x200px
map_caption = Location in Chaffee County and the state of

The City of Salida is a Statutory City that is the and most populous city of Chaffee County, , .GR|6 The population was 5,504 at the .

The town's name is Salida (pronounced Sah-LEE-dah) Spanish for Exit, as it is the exit of the valley. Local, non-hispanics pronounce it "sə-LYE-də."

Founded in 1880, Salida was originally a railroad town and was a significant link in the . After the railroad began pulling back its operations in Salida. Many residents in the 1950s, 1960s, and 1970s worked either in local ranching operations or commuted north to Leadville to work at the Climax Molybdenum Company. Today the most prominent business in Salida is tourism, consisting of at , , and , particularly on the . Salida is home to the annual kayak race, one of the oldest and most prestigious whitewater races in North America.

There were 2,504 households out of which 25.0% had children under the age of 18 living with them, 45.9% were married couples living together, 8.6% had a female householder with no husband present, and 42.1% were non-families. 35.9% of all households were made up of individuals and 15.4% had someone living alone who was 65 years of age or older. The average household size was 2.15 and the average family size was 2.80.