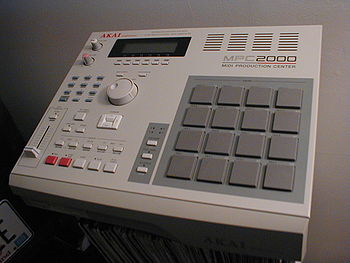 Akai MPCs (originally MIDI Production Center, now Music Production Center) are a popular series of electronic musical instruments originally designed by Roger Linn and produced by the Japanese company Akai from 1988 onward. Intended to function as a powerful kind of drum machine, the MPCs drew on design ideas from machines such as the Sequential Circuits Inc. Studio 440 and the Linn's own Linn 9000, combining a powerful MIDI sequencer with the ability to sample one's own sounds. Later models feature increasingly powerful sampling, storage, interfacing and sound manipulation facilities, which broaden the use of instrument beyond just drum and rhythm tracks.

The original MPC60 was designed by Roger Linn, who was hired as a design consultant by Akai.[citation needed] He developed the functional design, including the panel layout and software/hardware specifications. He then created the software with a team of engineers. The hardware electronics were designed by English engineer David Cockerell and his team.[1] Cockerell was a founding member of the synthesizer firm EMS (co-creater of their famous VCS3 along with Peter Zinovieff,[2]), and then worked for effects manufacturers Electro-Harmonix.

Shortly after the MPC60's release, the MPC60-II was designed. Released in 1991, the MPC60-II offered most of the same features as the MPC60, with an added headphone output and a plastic housing replacing the original metal one.[3] In 1994, Akai released the MPC3000, which boasted 16-bit, 44 kHz sampling, 32-voice polyphony, and SCSI data transfer.[4] Akai developed and released the MPC2000 without Linn in 1997.[1] Akai tried to save money by dropping Roger Linn, the brainchild behind the MPC, to whom they would have to pay royalties on future models.[1] The MPC 2000 came with 2 MB of RAM, an optional effects board, and a 100,000 note 64-track sequencer.[5] The MPC2000 was replaced by the MPC2000XL in 2000. The MPC2000XL added an improved 300,000 note sequencer, a 64-track mixer and time-stretch and resample features. Four limited edition models of the MPC2000XL were released.[5]

In 2002 Akai unveiled the MPC4000, the most powerful MPC ever made (higher bitrate and resolution than the later 5000). The MPC4000 featured 8 assignable outputs, a hard drive and CD-ROM drive. The MPC4000's memory could be expanded to up to 512 MB of RAM, the largest amount on an MPC to date.[6] Only two years after the release of the MPC4000, Akai released the MPC1000, which was the smallest in the MPC product line at the time of its release. It was also the first MPC to utilize CompactFlash memory.[7] Both the MPC2500 and the MPC500 were added to the Akai MPC series in 2006. The MPC2500 is a mid-range MPC with 8 assignable outputs and CompactFlash storage.[8] Designed for portability, the MPC500 features 1 MIDI In/Out and CompactFlash storage, and can be powered by 6 AA batteries.[9]

The following MPC models are arranged in the order of their release date: 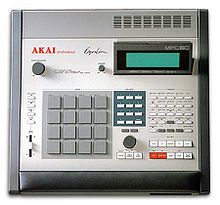 The MPC60 is a 16 voice polyphonic 12-bit 40 kHz sampler / 99 track sequencer designed in large part by Roger Linn after Linn Electronics closed. It was similar to the Linn 9000. Akai released it in 1988. It had 750 kB memory standard, expandable to 1.5 MB. The sequencer is very flexible and powerful, famous both for its "swing" setting, and its easy to use step programming. It had 2 MIDI inputs / 4 MIDI outputs, allowing it to control up to 64 devices. The sequencer itself was offered as a separate product, known as the ASQ10, also released in 1988. The MPC60-II was nearly identical to the MPC60, but it featured a headphone output, and a plastic case, instead of the metal case of the original. It was released in 1991. 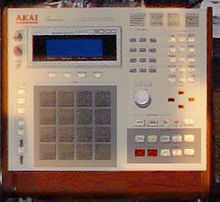 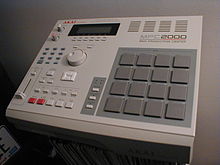 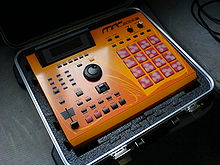 The MPC2000XL is similar to the MPC2000 but with many newer features; including four independent pad-bank keys, number of samples stored doubled to 256 on the XL, altering sounds to a different bit depth or sampling rate could be accomplished by resampling, time stretch was added along with other features. In 2004 the 2000XL-MCD version was released, which features a CompactFlash card reader as standard in place of the floppy drive or Zip drives used in earlier models.[10] There were 4 limited edition 2000XL SE MPCs created between 2000 and 2003. There were two versions of the SE 1, one with an improved control surface, compatible with growing number of sound libraries and one with aesthetic changes. The Limited Edition SE 2 and SE 3 also had only aesthetic changes.[11] The 4 SE models can be seen here: http://www.loopers-delight.com/tools/akai/MPC2000/MPC2000.html. 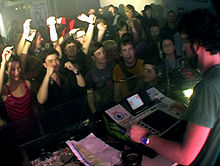 Released in 2002, the MPC4000 was intended by Akai as a "top-of-the-range" flagship product. Not only was it the most fully featured MPC product yet (building on the MPC60, 3000 and 2000XL), but it also incorporated the sampling engine from the latest model in Akai standalone sampler range, the Z8. The MPC 4000 was replaced by the MPC 5000 in spring 2008. The MPC4000 suffered from the poorest timing of all the MPC's though because it made use of a slow internal MIDI communication between the sequencer and the samplers voice engine. This was dropped in all future MPC models MPC1000, MPC500, MPC2500 & MPC5000. 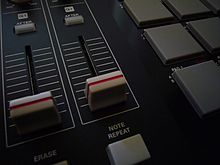 The MPC2500 is the mid-range of the Akai line of MPCs. It has a 100,000 note, 64 track mixer with 64 assignable MIDI channels. It has 16 MB of RAM standard and can be upgraded up to 128 MB of RAM with the AKAI EXM128 stick of RAM. It contains a USB port for computer connectivity. It contains a CompactFlash slot for storage of samples, and can be upgraded with a variety of hard drives. The MPC2500 contains 2 MIDI inputs and 4 MIDI outputs. The MP2500 also has the Chop Shop feature, which can chop a sample into as many as 64 pieces. A CD drive can be added for burning and reading capabilities. Also comes with a 128 mb compact flash card with sound kits. MPC2500 was discontinued in 2009.

The MPC1000 is a 64-track sampler/sequencer. It comes with 16 MB sample memory as standard, and can be expanded to 128 MB. It supports a sampling rate of 44.1 kHz, in stereo or mono. Its features include a USB port, an internal CompactFlash card reader, two MIDI inputs and outputs, and effects and multiple analog outputs as standard. Its sequencer's resolution is 96 ppq.

In 2007, Akai offered a fix for this issue, retailing at 180 USD. The pad sensors design returned to the design of the pad sensors in previous models. This upgrade has been seen to be pre-installed on the MPC1000BK-N and some versions of the MPC1000BK, not the MPC1000 (blue outer casing). Before this change, a MPC 1000 user designed, built and sold kits of a pad fix under the name "Nym." Nym's kit is no longer available. By comparison, the more recent Akai pad fix uses better sensor technology (Sensitronic FSRs).[12] 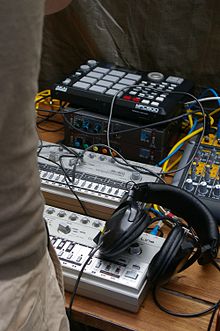 Akai MPC500 and others

The MPC500 is the smallest MPC ever made and is the first truly portable MPC created. It can be run on 6 AA batteries but also can be run on a 12V DC plug. It combines a 48-track MIDI sequencer and a 32-voice stereo digital sampler. The MPC500 is the first MPC that only has 12 velocity sensitive rubber pads. It comes with 16 MB RAM but can be upgraded up to 128 MB of RAM. It has a CompactFlash slot for storage of samples. One major appeal of the MPC500 is the fact that you can take a project created on the MPC500 and transfer it to any current MPC with a CompactFlash reader. The MPC500 has a USB port for computer connectivity. It has one stereo output, making it the only MPC currently in production that does not have assignable outputs.

With a listed MSRP of $3,500, the MPC5000 was launched at the 2008 winter NAMM trade show. Its main innovations were an 8-track streaming hard disk recorder, a 20-voice, 3-oscillator virtual analog synthesizer with arpeggiator, a new sequencing engine with 960 ppq resolution, pad and track muting and mixing, 64 continuous sample tracks. It also has a new FX engine with 4 FX buses and 2FX per bus, and is considered by Akai to be its flagship MPC.[13]

In addition, the MPC5000 features a 64-voice drum/phrase sampler with 64MB memory, expandable up to 192MB. The display is 240x128, twice the size of the MPC2500 and MPC1000. Integrated Chop Shop 2.0 now supports stereo chops and Patched Phrases. It is also the first MPC to include Random and Cycle sample playback in addition to velocity Zone Play. As on the MPC 4000, a turntable preamp is also included.

The following table offers a side-by-side comparison of a variety of statistics across the MPC product-line. The specs for the MPC 1000 and 2500 refer to the original AKAI operating system, unless mentioned otherwise.