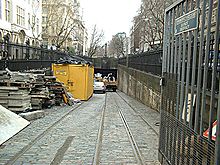 Abandoned conduit trackage at the Kingsway Tramway Subway in London

The power rails for conduit cars are contained in a vault between and underneath the running rails, much in the same fashion as the cable for cable cars. The vault contains two "T" section steel power rails of opposite polarity facing each other, about 12 inches (30.5 cm) apart and about 18 inches (45.7 cm) below the street surface. Power reached the car by means of an attachment, called a plough (US - plow), that rode in the conduit beneath the car. The plough had two metal shoes that pushed sideways against the power rails and connected to the car's controller and motor(s). The running rails are not part of the electrical circuit. In the United States, the cars were sometimes popularly but incorrectly called trolleys but did not typically draw power through a trolley pole from an overhead wire as (strictly defined) trolley cars do. 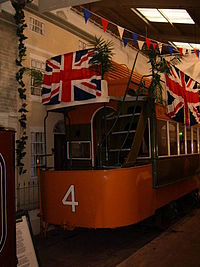 A conduit tramcar from Blackpool, on display at the National Tramway Museum

Conduit current collection was one of the first ways of supplying power to electric tramcars but it proved to be much more expensive, complicated and trouble-prone than overhead wires. When electric street railways became ubiquitous, it was only used in those cities which did not permit overhead wires. These included London, Paris, Berlin, Marseilles, Budapest and Prague in Europe and parts of New York City and Washington DC in the United States.[1]

In Denver, Colorado, the world's second electrically operated street railway, starting in 1885, pioneered the use of conduit current collection. Difficulties with the conduit and the electric streetcars led to the replacement of all conduit cars and lines with cable cars by 1888.

New York City had the largest installation of conduit cars, due to the prohibition of stringing overhead wires on Manhattan Island, although a few Bronx-based trolley lines entered the northern reaches of Manhattan using overhead wire. Trolley lines from Brooklyn and Queens also entered Manhattan under wire, but did not use city streets. The primary reason for the initial adoption of the conduit "plow" in Manhattan was the fact that return currents from conventional overhead wires using track return grounds were eroding gas mains.

The expense of creating conduit lines in New York was reduced to where it was possible to convert the cable vaults from discontinued cable car lines to conduit use. The huge expense of building new conduit, however, gave New York the distinction of having one of the last horsecar lines (the Bleecker Street Line) in the U.S., not closing until 1917. (Pittsburgh actually ran the very last U.S. horsecar, with service ending finally in 1923.)

In some old photographs, two "slots" may be seen between the rails. In New York City, sometimes one slot was used for a cable line and the other for electrical purposes. Occasionally, two competitive lines would share a common track and would have independent slots for the ploughs of the respective cars.

In New York City, the Queensboro Bridge between Manhattan and Queens had tracks installed on the outer lanes with conduit, for Manhattan cars in addition to overhead wire. The conduit allowed them to run to Queens Plaza terminus without need for removing the plough and raising the poles. In later years the conduit was removed and only trolley wire remained.

In the centre of Brussels, a number of tram lines were fitted with conduit, the last ones being converted to overhead operation during World War II.

The system was tried in the beachside resort of Blackpool, UK (see Blackpool tramway) but was soon abandoned as sand and saltwater was found to enter the conduit and cause breakdowns and there was a problem with voltage drop. Some sections of tramway track still have the slot rails visible.

Washington, D.C. had a large network of conduit lines, to save the capital city from unsightly wires. Some lines used overhead wires when they approached rural or suburban areas. The last such line ran to Cabin John, Maryland. The current collector "plow" as it was called, was mounted underneath the car on fitting just forward of the rear truck on D.C. Transit's PCC cars. It had two cables with female connectors on cables to attach to matching cables of the car's electrical system. A "plowman" was assigned at each changeover point from overhead trolley wire to conduit point to remove the cable attachments to the car and stow the plow, which would not remain with the car, but which would be reattached in an incoming car running on overhead wire. The lower section of the plow "board" was drawn by the moving car above within the cavity of the conduit. Because of this usage, many of Washington's streetcars carried trolley poles, which were lowered while operating in the central part of the city; when the cars reached a point where they switched to overhead operation, they stopped over a plow pit where the conduit plows were detached and the trolley poles raised, the reverse operation taking place on inbound runs. The 'pit' here has the meaning analogous to racing circuit pits rather than a depression in the road.

In the UK, London also had a hybrid network of double-deck trams: overhead collection was used in the outer sections and conduit in the centre. At the change over from conduit to overhead wire (at what was known as the 'change pit') the change process was largely automatic. The conductor released the trolley pole onto the wire then, as the tram moved forward, the conduit channel veered sideways to outside the running track automatically ejecting the collector plough. The tram was said to be 'shooting the plough'. At the change-over between overhead wire and conduit, the process was a little more complicated. The tram pulled up alongside a ploughman who engaged a two-pronged guide (known as a 'plough fork') over the plough in a short length of unelectrified conduit and into the plough channel underneath the centre of the tram. As the tram drew forward, the conduit channel moved under the tram carrying the plough into position. The conductor could then pull down the trolley pole and stow it. The process is illustrated here. The ploughman's job was a fairly skilled one because, if he failed to locate the plough fork correctly, it or the plough itself could jam in the plough channel and cause lengthy delays. Some tram designs required an extra carrier to be located with the plough and these frequently caused problems for ploughmen not used to the design (particularly if the tram had been diverted from its normal route).

New track was laid as late as 1951 for the Festival of Britain, which commemorated the Great Exhibition of 1851. The last tram was withdrawn in June 1952 and virtually all the tracks had been removed by the 1970s, although a short section can still be seen in the Holborn area at the entrance to the former Kingsway Tramway Subway.

Other European hybrid tramway networks included Paris, Nice, Lyon, Lille and Bordeaux in France; Berlin, Vienna and Budapest. In Paris, the conduit sections were frequently very short, requiring cars to change from overhead to conduit and back several times in one journey. The last conduit line in Paris closed in 1936, while the last Bordeaux conduit car ran in 1953. The conduit systems in Berlin, Vienna and Budapest were very short-lived. All three were replaced by overhead working before World War I.