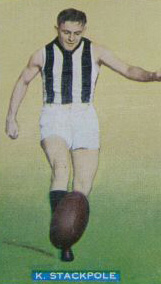 Keith William Stackpole (31 July 1916&ndash;19 September 1992) was an footballer who played with Collingwood and Fitzroy in the VFL.

Stackpole made his VFL debut in 1935 with Collingwood and played as a reserve in that year's winning Grand Final as well as their premiership triumph the following season. Due to the success of Collingwood the competition for a place in the side was tough and as a result he left the club for Fitzroy during the 1939. He formed a strong partnership with fellow rover and his last game of football was their 1944 Grand Final win in which he kicked 2 goals.

After leaving the league he joined Prahran as captain and coach, kicking 85 goals in his first season. He also became a Victorian first-class cricketer and made 1025 runs at 34.16 from his 20 games. His son, Keith junior, would play Test cricket for Australia.