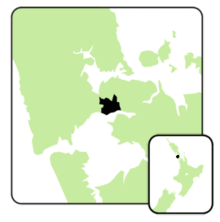 Mount Roskill is a Parliamentary electorate in Auckland, New Zealand, returning one Member of Parliament (MP) to the House of Representatives. Phil Goff[1] of the Labour Party has held the seat since the 1999 election.

Mount Roskill is located on the western edge of Auckland City, bordering the Manukau Harbour. It is anchored around the suburbs of Mount Roskill, Three Kings, Hillsborough and a large section of Balmoral. The 2008 election boundaries added in Lynfield and New Windsor at the expense of Onehunga, which returned to the Maungakiekie electorate after being cut out in 1999. The Mount Roskill electorate is working-class and multi-ethnic, with a high Pacific Island and Asian population, and has the highest number of overseas-born residents – nearly 40 per cent in 2001 – of any New Zealand electorate.

As population growth after the 1996 census in north and west Auckland dragged boundaries westward, so New Lynn was massively altered and was left sitting right at the edge of the boundary between Auckland and Waitakere cities and renamed Titirangi. The eastern side of New Lynn was amalgamated with the population excess of Epsom, the southern half of the defunct Owairaka seat and the western end of Maungakiekie, thus leading to Mount Roskill's creation, it being the first new seat drawn since the introduction of Mixed Member Proportional voting three years previous.

The only MP for Mount Roskill has been Phil Goff of the Labour Party. He was the MP for New Lynn and also represented Roskill, a smaller seat covering much of the same area, in previous parliaments. In the 2005 election, Goff's majority was slashed by 4,000 to a still unassailable 9,985, while Labour dominated the party vote, coming half a percent shy of exactly half of all party votes cast. In the same election Kenneth Wang was one of only two ACT Party electorate candidates to score more than five percent of votes cast.

Members of Parliament elected from party lists in elections where that person also unsuccessfully contested the Mount Roskill electorate. Unless otherwise stated, all MPs terms began and ended at general elections.