The city of Danzig (Gdańsk) was captured by the State of the Teutonic Order on 13 November 1308, resulting in a massacre of its inhabitants and marking the beginning of tensions between Poland and the Teutonic Order. Originally the knights moved into the fortress as an ally of Poland against the Margraviate of Brandenburg. However, after disputes over the control of the city between the Order and the King of Poland arose, the knights killed local nobles and burghers and took the city as their own. 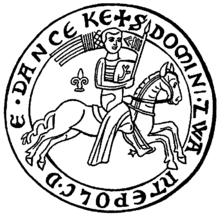 In the 13th century, the Pomerelian duchy was ruled by members of the Samborides, up until 1227 stewards for the Polish Piast kings and dukes. The stewards asserted their power from fortified strongholds. The major stronghold of the area was at the location of present-day Gdańsk's Old Town. The adjacent town developed from a market place of German tradesmen and was granted Lübeck city rights by DukeSwietopolk II (Zwantepolc de Danceke) in 1224. According to Raphael Lemkin the population in the city at the time was Polish[1] According to Hartmut Boockmann, the town was primarily inhabited by Germans.[2] James Minahan wrote that the city inhabitants, for the most part, were Kashubians.[3]

After Mestwin II, the last member of the Samborides died in 1294, disputes over succession arose. In the 1282 Treaty of Kępno[4] Mestwin II promised his Pomerelian duchy to his ally Przemysł II, duke and later king of Poland, who succeeded to the duchy in 1294. The Margraviate of Brandenburg to the west, claimed rights to the harbor city and Pomerania based partially on a treaty of August 8, 1305 between the Rulers of Brandenburg and Wenceslaus III, promising the Meissen territory to the Kingdom of Bohemia in exchange for Pomerelia, although that treaty was never finalized. The Teutonic Order had inherited Gniew (Mewe) from Sambor II, thus gaining a foothold on the left bank of the Vistula.[5]

In Summer of 1308, a Pomeranian rebellion in the city unseated the forces loyal to Władysław I the Elbow-high (who later would become King of Poland), and allied itself with Waldemar of Brandenburg [6] who entered the town, but not the castle which was held by a small garrison loyal to the king. They, and the city's Pomeranian judge and castellan, Bogusza, on the advice of the Dominican prior Wilhelm,[7] appealed to the Teutonic Knights in Prussia for assistance.[8]

The Knights, under the leadership of Heinrich von Plötzke, agreed to aid Bogusza, if in exchange they were to allowed to garrison the town's grod for a year. A force of 100 knights and 200 supporters, led by Günther von Schwarzburg, arrived at the castle around August at which point the Brandenburgers lifted the siege without any fighting. The rebellious inhabitants, who supported the Brandenburgers, however, remained opposed to the Polish-Teutonic takeover. In September, the Teutonic Knights, together with the Polish garrison, begun their own siege of the city. Soon, however, tensions rose, as both sides vied for control; eventually the Polish knights with Bogusza left the town, leaving the siege under Teutonic Knights control. Shortly later, the Knights successfully took the town and carried out the massacre of its inhabitants.

In the aftermath of the take-over, law suits against the order were filed by the Polish side, mostly the Polish ruler Władysław I the Elbow-high, which included reports that, after the siege, the order had killed up to 10,000 people.[2][9][10][11] As a result of the suit, the Teutonic Knights were briefly excommunicated by the pope, yet that decision was reversed soon after.[9] The respective Papal Bull of 19 April 1310 includes a reference to the 10,000 dead.[11][12] While in the consequence the Knights moved their headquarters from Venice to the Ordensburg Marienburg, the lawsuits did not have any practical effect on the order.[2]

In the 15th century, era of the Polish-Teutonic Wars, medieval Polish chronicler Jan Długosz in epic prose described the event as a slaughter of Polish nationals that regardless of condition, age or gender.[13]

Pomerelia (Pommerellen) while part of the monastic state of the Teutonic Knights.

When the Poles refused to accept monetary compensation for the Knights' takeover of the city and the massacre, the Order resorted to conquering further towns like Schwetz (Świecie).[5] The local colony of merchants and artisans was specifically attacked because they competed with the Knights' town of Elbing (Elbląg), a nearby city.[12] The Knights also attacked Tczew (Dirschau).

The Knights then captured the rest of Pomerelia from Brandenburg's troops. In September 1309, Margrave Waldemar of Brandenburg-Stendal sold his claim to the territory to the Teutonic Order for 10,000 marks in the Treaty of Soldin (now Myślibórz), thereby connecting the State of the Teutonic Order with that of the Holy Roman Empire. While for the order, this landbridge with the empire was a major strategic improvement by connecting its Baltic territories to its German bailiwicks (ballei), it was at the same time a major loss for Poland who had become a landlocked country again.[14][15]

Thus, the takeover triggered a series of conflicts between Poland and the Teutonic Order, and these conflicts in turn triggered a conflict within the order itself. Some prominent brethren favoured a concession of Pomerelia in exchange for good relations with Poland, but were opposed by a majority of the knights who thought that such a concession would eventually lead to the total expulsion of the knights from their state.[16] These disagreements caused the abdication of Grand Master Charles of Trier in 1318 and the murder of the succeeding Grand Master Werner of Orseln in 1330.[16] The possession of Danzig and Pomerelia by the Teutonic Order was questioned consistently by the Polish kings Władysław I and Casimir the Great in legal suits in the papal court in 1320 and 1333.[9] Both times, as well as in 1339, the Teutonic Knights were ordered by the Pope to return Pomerelia and other lands back to Poland, but did not comply.[9] As a result, in the late 1330s, a war ensued.[9]

Peace was established in the Treaty of Kalisz in 1343; although the Polish kings were able to retain the title "Duke of Pomerania" and were recognized as titular overlords of the crusaders, the Knights retained control of Danzig.[8] - this time, with the permission of the papal court.

Development of the city stagnated after its capture by the Teutonic Knights. Initially the new rulers tried to reduce the economic significance of Danzig by abolishing the local government and the privileges of the merchants. This was exemplified by the fact that the city council, including Arnold Hecht and Conrad Letzkau, was removed and beheaded in 1411.[17] Later the Knights were forced to accept the fact that city defended its independence and was the largest and most important seaport of the region after overtaking Elbing. Subsequently it flourished, benefiting from major investment and economic prosperity in the Monastic state and Poland, which stimulated trade along the Vistula. The city had become a full member of the merchant association, the Hanseatic League by 1361, but its merchants remained resentful at the barriers to trade up the Vistula river with Poland, along with the lack of political rights in a state ruled in the interest of the Order's religiously-motivated knight-monks. As a result the city became a co-founder of the Prussian Confederation which formally petitioned Casimir IV Jagiellon, to incorporate Prussia, including Danzig, into the Kingdom of Poland in 1454.

When the area was disputed between Weimar Germany and the Second Polish Republic, the Poles recalled the massacre quoting the number of 10,000 murdered.[18] After Nazi Germany had annexed the Free City of Danzig in World War II, the exiled Polish government in releases said that the knights had "massacre[d...] ten thousand souls", portrayed the contemporary Germans in the tradition of these events and linked these events with National Socialism.[19][20] After World War II, when the area had become part of the People's Republic of Poland, Polish politician and writer Jędrzej Giertych replied to a US congressman's statement, "The citizens of Danzig are German as they always had been",[21] that the knights treacherously gained access into the Polish garrison as allies, then turned their arms against the Poles, massacred first the soldiers, then the civilians, 10,000 men, women and children.[22] in 1969 the post-war Polish city authorities dedicated a monument that commemorates the massacre of the population of Gdańsk in 1308,[23] its aim was to propagate an analogy of the events of 1308 and the German crimes of World War II.[24]

Modern sources are divided as to the actual extent of the massacre though they all agree that one did take place. Historian Matthew Kuefler states: "German and Polish historians in the twentieth century tended to have diverging both on the question of whether Pomerelia really "belonged" to Poland and also on the degree of ferocity of the order's conquest".[9] The city of Gdańsk states that "The Teutonic Knights, having captured the castle in 1308 butchered the population. Since then the event is known as the Gdańsk slaughter".[25] In many Polish works, the takeover is indeed referred to as "Gdańsk slaughter" (rzeź Gdańska).[26][27][28] Norman Davies in his extensive history of Poland says, while not insisting on the number of 10,000 dead, that the knights "drove Waldemar from the city, and calmly slaughtered its inhabitants",[29] similar descriptions are presented also in some other English books with sections on Polish history.[30][31] Jerzy Lukowski in "A concise history of Poland" says that the knights massacred "Lokietek's men".[32]

On the other hand, German historian Hartmut Boockmann asserts that 10,000 is a "typical medieval number abundantly used by contemporary chroniclers" meaning "very much",[2] and he states that the original figure seems far too high compared to an overall population of Pomerelia which he estimates at 130,000.[2][33] William Urban says that the number of 10,000 dead has been considered greater than the city's population at the time.[12] Based on Polish research up to 2002, Boockmann gives a number close to a hundred dead.[2]