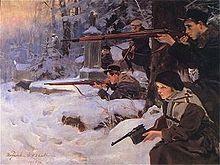 Lwów Eaglets (Polish: Orlęta Lwowskie) is a term of affection applied to the Polish teenagers who defended the city of Lviv (Polish: Lwów, German: Lemberg) in Eastern Galicia, during the Polish-Ukrainian War (1918–1919).

The nowadays western Ukrainian Lviv (Polish: Lwów, German: Lemberg) before the breakdown of Austro-Hungarian empire, was the biggest and capital city of one of Habsburg's dominions - the Kingdom of Galicia and Lodomeria. While Poles were the prevailing ethnicity in the province, in the eastern galician territories Ukrainians constituted a majority (65%), Poles were a significant minority (22%) and dominated the cities, together with the Jewish residents.[1] In Lviv, according to the Austrian census of 1910, which listed religion and language, 51% of the city's population were Roman Catholics, 28% Jews, and 19% belonged to the Ukrainian Greek Catholic Church. Linguistically, 86% of the city's population used the Polish language and 11% preferred the Ukrainian language.[2]

In the final days of collapsing Habsburg's empire, on November 1, 1918, Ukrainian soldiers from former Austrian army units occupied Lviv's public utilities and military objects, raised Ukrainian flags throughout the city and proclaimed the birth of the new Ukrainian state. While the Ukrainian residents enthusiastically supported the proclamation, the city's significant Jewish minority remained mostly neutral towards the Ukrainian proclamation and the Polish residents, constituting the majority of Lviv's inhabitants, were shocked to find themselves in a proclaimed Ukrainian state.[3] Reacting to the Ukrainian military coup, Poles upraised throughout the city. Polish forces, initially numbering only about 200 people, organized a small pocket of resistance in a school at the western outskirts of the city, where a group of veterans of the Polish Military Organization put up a fight armed with 64 outdated rifles. After the initial clashes, the defenders were joined by hundreds of volunteers, mostly scouts, students and youngsters. More than 1000 people joined the Polish ranks in the first day of the fights.

Originally the term was applied exclusively to the young volunteers (such as Antoni Petrykiewicz), who had participated in the so called Defence of Lwów (Polish: Obrona Lwowa), i.e. during the fights within the city (November 1 to November 22, 1918) and the following siege by the Ukrainian army from November 23, 1918 to May 22, 1919. With time, however, the term's application was broadened, and it is now used for all the young soldiers who fought in the area of Eastern Galicia in the defense of the Polish cause in the Polish-Ukrainian War and the Polish-Bolshevik War. In addition to the young Polish nationals of Lviv, those fighting in the Polish-Ukrainian battle for Przemyśl (Ukrainian: Peremyshl) are also frequently referred to as Eaglets (Pol. Orlęta Przemyskie).

Cemetery of the Lwów Eaglets 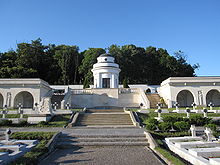 Cemetery of the Defenders of Lwów

After the Polish-Ukrainian conflict, the Lwów Eaglets were interred at the Cemetery of the Defenders of Lwów (Polish popular name: Cmentarz Orląt Lwowskich), part of the Lychakiv Cemetery. The Cemetery of the Defenders held the remains of both teenaged and adult soldiers, including foreign volunteers from France and the United States. The Cemetery of the Defenders of Lwów was designed by Rudolf Indruch, a student at the Lviv Institute of Architecture, himself an Eaglet. Among the most notable Eaglets to be buried there was 14-year-old Jerzy Bitschan, the youngest of the city's defenders, whose name became an icon of the Polish interbellum. Also resting in the Eaglet's pantheon is six year old Oswald Anissimo who was executed together with his father Michał by the Ukrainian soldiers.[4]

After the annexation of Eastern Galicia with the city of Lwów by the Soviet Union in World war II (see: Soviet invasion of Poland) and the following expulsion of the Polish population from the city, the graves were destroyed in 1971, and the Cemetery of the Defenders of Lwów was turned into a municipal waste dump and then into truck depot. After the dissolution of the Soviet Union and the formation of an independent Ukraine, work began on the restoration of the "Eaglets' Cemetery", although slowed by opposition of local nationalists. Following Polish support for Ukraine's Orange Revolution (2004), the opposition declined and the Cemetery was officially reopened in a Polish-Ukrainian ceremony on June 24, 2005. The last surviving Lwów Eaglet, Major Aleksander Sałacki (born 12 May 1904), died in Tychy, on April 5, 2008.