The grave of Ser Vittore Cappello in the Church of Saint Helen in Venice, made by Niccolò Fiorentino 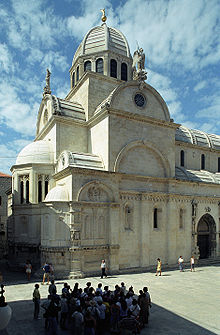 Cathedral of St James in Šibenik from 1555, UNESCO World Heritage

Niccolò Fiorentino (Croatian: Nikola Firentinac, Italian: Niccolò di Giovanni Fiorentino); (Bagno a Ripoli, Florence 1418 - Šibenik, 1506), was a Dalmatian Renaissance sculptor and master architect. He was of Tuscan birth, but lived most of his life and conducted much of his work in Venice, Šibenik (Sebenico) and other towns of Dalmatia.

He is best known by his work on the Cathedral of St.James in Šibenik, in 1455. After the death of Giorgio da Sebenico (Croatian: Juraj Dalmatinac),[1] Niccolò finished the cathedral and its original stone dome following the original plans of Giorgio.

Work on Šibenik cathedral inspired Niccolò for his work on the expansion of chapel of Blessed John from Trogir in 1468. Just like the Šibenik cathedral, it was composed of large stone blocks with extreme precision. In cooperation with a disciple of Giorgio, Andrija Aleši, Niccolò achieved close harmony of architecture and sculpture according to antique ideals. From inside, there is no flat wall. In the middle of chapel, on the altar, lies the sarcophagus of blessed John of Trogir. Surrounding this are reliefs of genies carrying torches as if peering out of the doors of the underworld. Above them there are niches with sculptures of Christ and the apostles, among of which are putti, circular windows encircled with fruit garland, and a relief of Nativity. All feature a coffered ceiling with an image of God in the middle and 96 portrait of angels' heads. With so many faces of smiling children, the chapel looks very cheerful, unlike other European art of that time.

In recent years, a theory about the Croatian origins of Niccolò Fiorentino has emerged.[2]