The Coke Zero 400 powered by Coca-Cola at Daytona is a 160 lap, 400 miles (640 km) NASCAR Sprint Cup Series stock car race held annually, beginning in 1959, at Daytona International Speedway in Daytona Beach, Florida; the second major stock car event held at Daytona on the Sprint Cup circuit. Since 1988, the race has been held on the first Saturday of July closest to the United State's Independence Day and in 1998 became the first restrictor plate/Daytona race to be held at night.[1][2]

A ten year deal, that started in 2008, between Atlanta-based Coca-Cola and International Speedway Corporation agreed to make Coke the official soft drink, official sparkling beverage and official water for ten of ISC's operated motorsports facilities and the Daytona 500. The company replaced Pepsi-Cola, bringing a 19 year race sponsorship to an end, to showcase Coke Zero as the race's title brand through 2018.[3]

The annual event is recently known for its close finishes, posting a (.154 ds) margin of victory in its last 21 races including the T-4th closest margin of victory in Sprint Cup history at (.005 ms); high speed high-density crashes under the lights, and a broad display of fireworks during post-race celebrations.

Following two separate life ending accidents to drivers Marshall Teague and George Amick during the inaugural USAC Championship (Indy Car) weekend events at Daytona International Speedway in April of 1959, speedway officials announced that extremely high speeds would prompt them to conclude any scheduled events at the track, including a 300 mile race scheduled on July 4. William France Sr., the Daytona superspeedway owner at the time, announced plans to hold a 250 mile stock car race instead that would take 100 laps scheduled for the same day.[4]

The race came to be named the Firecracker 250, owing to the fact the race would be held on Independence Day. William France Sr. announced on July 1 that the winner of the race would receive the Marshall Teague Memorial trophy, a trophy honoring and commemorating the life of Teague who died in February. The trophy was presented by Teague's daughter and widow.[5]

The inaugural race was held on July 4, 1959, at about midday to limit the possibility of afternoon interference from thunderstorms known to Florida, and to exploit the potential for competitors hooking up with relatives and friends for an afternoon of fun on the nearby beach.[6] Before the race preliminary activities took place including a Miss Dixie pageant, where twenty aspiring pageant winning hopefuls marched to showcase their bathing suits.[7] With 12,900 in attendance the race ran its scheduled 250 miles with no caution flags, and with a 57sec lead over runner-up Joe Weatherly, Daytona Beach native Fireball Roberts won in dominate fashion leading 84 of 100 laps.[8][9] For the next three years a couple of Nascar's top drivers would go on to win the Firecracker 250, including Jack Smith, David Pearson and a repeat victory in 1962 for Fireball Roberts.[8]

Expansion was needed, in just three years from the race's inaugural event attendance had grown by more than ten thousand as tourists flocked to the beaches for the holidays; so in 1963 the race was expanded from 100 laps to 160 laps, for a distance of 400 miles, and subsequently became known as the Firecracker 400. In the same year Roberts drove his '63 Ford to victory, becoming the first driver to win back-to-back events by barely beating Fred Lorenzen.[8] Unfortunately Roberts was unable to go for three straight wins due to his death on July 2, 1964.[10]

Richard Petty was the man to beat during the sixth annual 400 mile July race, but on lap 103 engine problems cost him a chance at victory. Over the course of the final 56 laps Bobby Isaac and rookie teammate A.J. Foyt swapped the lead fifteen times.[8] Coming out of the fourth turn Foyt was able to barely edge out Isaac to the stripe; giving Foyt his first career NASCAR victory in only his tenth start.[11] One year later Foyt got his second career win, becoming the second driver to win back-to-back Firecracker races.[12]

Foyt didn't even attempt to defend the title of reigning race winner in 1966.[8] Instead it was the dark horse 1965 Rookie of the Year driver Sam McQuagg winning the race. McQuagg collected his first and only NASCAR victory driving a 66' Dodge Charger while utilizing a new racing mechanism: the rear 'spoiler'. The air cutting spoiler allowed McQuagg to shatter Foyt's 151.451 mph race average set two years prior.[13] Only two cars finished on the lead lap and the margin of victory to second place driver Darel Dieringer was sixty-six seconds.[8]

In late March 1969 William France Sr. invited all surviving American Congressional Medal of Honor recipients to attend the July 4 race dubbed the Medal of Honor Firecracker 400. Chairman of the House Armed Services Committee would arrange for the heroes and their families to be flown in via military aircraft.[14] 100 members from 31 states would attend the race with Thomas J. Kelly the president of The Medal of Honor Society as the grand marshal.[15] With success France Sr. invited them on two more occasions in 1971 and 1973, won by Bobby Isaac and David Pearson respectively.[8][16][17]

In 1974 the maneuver used by David Pearson to win his third straight Firecracker race would be talked about well after he crossed the stripe. After collecting the white flag Pearson slowed his Wood Brothers 73' Mercury to allow Richard Petty to jump out to a seven car lead. Following the race Pearson was quoted saying "I thought Petty might be able to slingshot and draft past me on that last lap and that's why I didn't want to be leading..."[18] Using the draft Pearson was able to close on Petty into the final turn and eventually passed him coming to the tri-oval for the win.[19] Eight seconds behind the Pearson-Petty duel, Buddy Baker and Cale Yarborough seemed to have crossed the finish line at the same time. After two hours of deliberation officials announced a dead heat for third place, the only tie recorded in NASCAR history.[18] During the race nine different drivers exchanged the lead 49 times, a race record that stood until it was broken with 57 between 25 different drivers in 2011.[20]

On July 4, 1987, in the wake of Bobby Allison's massive crash at Talladega, the cars were fitted with 390 CFM carburetors. The change helped slow the cars down several mph. On the final lap, Ken Schrader flipped upside-down in the tri-oval as the field crossed the finish line. It would be the final race at Daytona without restrictor plates.

For most of its history, the race normally started in the morning (10:00 a.m. or 11:00 a.m. eastern) to avoid hot summer temperatures and the frequent mid-afternoon thunderstorms in Florida. During live ESPN telecasts, the term "Breakfast at Daytona" was used, a gesture to NBC's popular "Breakfast at Wimbledon", taking place the same weekend.

In July 1997, Daytona International Speedway announced a massive lighting project to be done by MUSCO lighting, the same company who installed lights at Charlotte. Plans called for the 1998 Pepsi 400 to be held under the lights in primetime. At the time, it was the longest track with a night race, and the first restrictor plate race held at night.

On July 4, 1998, however, the race had to be postponed. Wildfires in Florida consumed the surrounding areas, and the track was converted into a firefighters' staging area. Track officials rescheduled the race for October that year.

With the race's fundamental link to Independence Day, U.S. Presidents have been in attendance on two notable occasions.

On Wednesday July 4, 1984, President Ronald Reagan became the first sitting U.S. President to attend a NASCAR race. The President gave the command to start the race ("Gentlemen, start your engines") by phone from aboard Air Force One. Landing at Daytona, the President proceeded to the track, and viewed the race with Bill France Jr.. During his time at the race, Reagan was interviewed by NASCAR driver Ned Jarrett, who in 1978 had begun a career as a radio race broadcaster. The 1984 Firecracker 400 is also legendary since it was the race at which Richard Petty achieved his unparalleled 200th (and final) win. Petty and President Reagan were interviewed together following the race, and the President joined Richard Petty and his family in Victory Lane.

On July 4, 1992, President George H. W. Bush attended the race, which served as a Daytona farewell tribute to Richard Petty during his "Fan Appreciation Tour." Bush, on the 1992 campaign trail, participated in pre-race festivities, gave the starting command, and rode around the track in the pace car during the pace laps. Petty qualified a strong second, and led the first 5 laps of the race and quickly fell back to the end of the field. He succumbed to heat exhaustion, however, and dropped out near the halfway point.

On July 1, 2000, then-Texas governor and future president George W. Bush attended the race while on the campaign trail. He gave the command to start engines.

The 400 has also marked the first of multiple points-paying victories at Daytona for a total of seven drivers, including Jeff Gordon (1995) and Dale Earnhardt (after 24 previous attempts from 1978–1990). David Pearson won the 400 four times prior to finally winning the Daytona 500 in 1976.

Jeff Burton's 2000 race victory marks his only career restrictor plate win in 67 starts. Notably, Tony Stewart has won the 400 three times, but has never won the Daytona 500 (his best finish was 2nd in 2004). 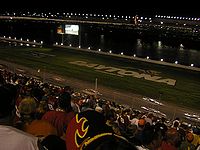 The drivers who have won the Coke Zero 400 and the Daytona 500 are as follows (Bold indicates winning both in the same season):

In the 1970s and 1980s, the race was shown tape delayed on ABC's Wide World of Sports on the Saturday following the race. Typically, since July 4 often fell during the week, the broadcast would not air the same day the race was held. If July 4 fell on a Saturday, the race was aired later in the day, taped and edited.

From 1989 through 1997, the race switched to a live flag-to-flag broadcast on ESPN. The 1989 event was noteworthy in that it was the event's first live coverage (actually slightly time shifted), and the first opportunity for ESPN to broadcast an event from Daytona. The switch came one year after the race was planted firmly on Saturday morning. The 1990 race was live flag-to-flag.

For the 1995 Pepsi 400 and Southern 500, ESPN ran what was a bit of prelude to DirecTV's Hotpass. ESPN showed the race, while ESPN2 showed onboard cameras and radio with some of the teams.

When it was scheduled to become a night race in 1998, broadcast rights changed to CBS, which also at that time covered the Daytona 500. However, the 1998 event was postponed until October due to Florida wildfires. CBS partner TNN broadcast the race live instead. For 1999-2000, the race reverted back to live broadcast on CBS in primetime. Between 2001-2006, the race was shared between NBC and Fox (NBC odd years, Fox even years, the opposite of the Daytona 500 coverage).

In 2007, TNT took over television rights under the new contract, and introduced their "Wide Open Coverage" for this race. It is similar to ABC and ESPN's Side-by-Side commercial format for IndyCar broadcasts. The race was broadcast in splitscreen format, with the race footage on the top half of the screen in 16:9 format, and scoring and graphics on the bottom half. Commercials were broadcast in a box in the bottom right hand corner of the screen, and various special two-minute advertisements were filmed for the telecast by the respective advertisers. In 2010, the race was broadcast in 3-D on NASCAR.com and DirecTV In 2010 One HD, an australian sport channel, got the rights to show live lap by lap coverage of the daytona 500 and the coke zero 400 and it will continue showing coverage through till contract ends