The Bumper of My SUV

The Bumper of My SUV

Infobox Single
Name = The Bumper of My SUV 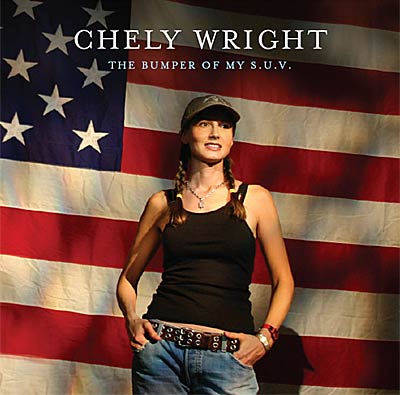 "The Bumper of My SUV" is a single, released in November 2004, by American artist . A #35 hit on the "Billboard" charts, it also spent 9 weeks at #1 on 'Billboard'Country Sales chart. It was the second single from her 2004 album "". The song garnered attention when it was first played for troops while Wright was visiting Iraq.

Written entirely by Wright, the song is a , accompanied almost exclusively by . Its lyrics are a first-person account of a woman who is driving her SUV. She is given the finger by another driver, due to the fact that she (the singer) has "a bright red sticker for the U.S. Marines / on the bumper of [her] SUV". The singer then defends her sticker, stating that her family served in the Marines.

Signed to Dualtone Records at the time, Wright released "The Bumper of My SUV" in November 2004 as the second single from her album "The Metropolitan Hotel". The song soon became the second fastest-selling single on the "Billboard" country sales charts at the time, and reached a peak of #35 on the U.S. Hot Country Singles & Tracks (now ) charts.

While the song was climbing the charts, it was discovered that members of Wright's fan club were contacting radio stations nationwide, requesting increased airplay for the song to help it climb the charts.

critic , in his review of "The Metropolitan Hotel", described the song as follows: " [T] he cloying 'The Bumper of My S.U.V.' is well-intentioned but is one of the more awkward Iraqi war songs -- but those missteps only enhance the feeling that this album is a personal work for Wright, and that she's willing to make mistakes along the way." [cite web |url=http://www.allmusic.com/cg/amg.dll?p=amg&sql=10:jpfyxqusldae |title="The Metropolitan Hotel" overview |accessdate=2008-10-10 |last=Erlewine |first=Stephen Thomas |authorlink=Stephen Thomas Erlewine |work=]