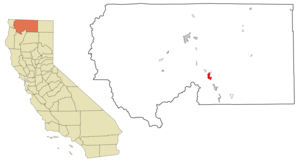 mapsize = 250x200px
map_caption = Location in Siskiyou County and the state of

Weed is a city located in . As of the 2000 Census, the town had a total population of 2,978. Weed is about 10 miles (16 km) west-north-west of , a prominent northern California landmark. It was named for pioneer mill owner Abner Weed, who discovered that the area's strong winds were helpful in drying lumber. By the 1940's, Weed boasted the world's largest sawmill.

Although historically reliant on logging, with the decline of logging in the area, Weed's economy has become more diversified, relying more on tourism and on the economic benefits of the located in Weed. Visitors use Weed as a base to engage in trout fishing in the nearby Klamath,

Aside from the abundant recreaction opportunities of nearby lakes and waterfalls, other tourist attractions near Weed include: , Weed Historic Lumber Town Museum, Pluto Caves, Stewart Mineral Springs, Lake Shastina Golf Resort and the Weed Skatepark. , and are also attractions in the larger area.

As a small community with few retail outlets, taxable sales within the city are somewhat limited, totaling $53 Million in 2006 ["Taxable Sales in California by City, 2006" State Board of Equilization. http://www.boe.ca.gov/news/tsalescont06.htm] .

Education: 7% of Weed residents age 25 and older have a bachelor's or advanced college degree.

The Republican representation has more to do with the demographics and political affliations of the districts in which Weed falls, as opposed to the the political views of the community itself. At the local level, Siskiyou County Supervisoral District 3, in which Weed is the core community, voter registration is 39.6% Democrat, 39.1% Republican, 16.2% Decline to State, with remainder split amongst other political parties such as Green, and Libretarian as of 2006. [Siskiyou County Clerk's Office "Registration by Political Party by Supervisoral District 2006.http://www.co.siskiyou.ca.us/clerk/elections/elections.htm] .

* The town of Weed gets its name from the founder of the local lumber mill, one Abner Weed. In 1897 Abner Weed bought the Siskiyou Lumber and Mercantile Mill and 280 acres of land in what is now the City of Weed, for the sum of $400.
* The area's landscape is dominated by an immense towering volcano, , which usually has snow near its peak all year round.
* Mount Shasta is the second highest peak in the Cascade Range and the fifth highest in California.
* Natural Alpine Spring Water is bottled in Weed at 4 different spring sources below Mount Shasta.
* Weed is also home to the [http://www.weedales.com/home.htm Mt. Shasta Brewery] , which produces several varieties of microbrewed beer.
* Weed is the home of producer Sylvia Massy's RadioStar Studios.
* Weed is referenced extensively in "" by .
* The city's name has been used as the source of humor because the name can be a slang term for . of "", responded to a question about "U.S. cities that would never have a song written about them" by saying "What's the matter with Weed?".
* At some stores in the area, you can find souvenirs that state that "I'm high on Weed..., California".
* Weed is where recorded the album "Heroine".
* , NFL player, attended school in Weed. Graduating from Weed High School, where he played football, prior to attending Oregon State University.
* Charles Byrd, once Police Chief of Weed, became the first African American to be elected Sherrif in the State of California, in 1986; holding his office of Siskiyou County Sherrif for four terms. [McLellen, Dennis "Charles Byrd..." Los Angeles Times 30 Sep 2003. http://articles.latimes.com/2003/sep/30/local/me-byrd30]