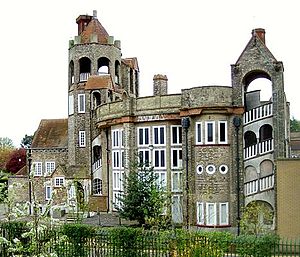 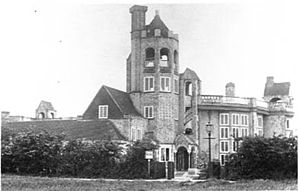 The Cloisters in Letchworth Garden City, Hertfordshire in the UK, was built by Quaker Miss Annie Jane Lawrence (1863-1953), the daughter of Alfred Lawrence (1826 - 1875), who, with his brother Frederick, owned 'Lawrence Brothers, Smiths and Founders', and his wife Mary Elizabeth.[1] Originally built as an open-air school dedicated to Psychology, with accommodation for 20 students, students were encouraged to study "how thought affects action and what causes and produces thought." Through healthy outdoor living it was intended that the students would develop healthy minds. The building was also designed to hold lectures, conferences, drama and musical performances as well as organ recitals. Students were also taught skills from the Arts and Crafts movement.[2]

The design reputedly came to Miss Lawrence in a dream. The building originally consisted of a large half-oval 'open-air room' called the `Cloisters Garth' with an open colonnade to the south and large glazed bays to the north; this was flanked by two wings, one housing the kitchen and store rooms and the other the cubicles and dressing rooms for an oval open-air swimming pool. It was designed according to the principles of the Arts and Crafts movement, and was built using marbles and other materials from all over Europe.

A small community developed at The Cloisters dedicated to Theosophy. It became the base for the Alpha Union set up by J.Bruce Wallace of the Brotherhood Church, who organised summer schools and residential courses there. Miss Lawrence, although somewhat deaf, was a great music lover. On one occasion she brought The London Concert Orchestra, made up of 40 unemployed musicians, to play at the Cloisters Garth. This was part of an ongoing series of concerts that she organised attended by audiences of 1,000, making organ recitals, band and choral concerts a regular part of the new town's cultural life. The last concert was given by the Brotherhood Orchestra in 1939 on the day the Second World War broke out. 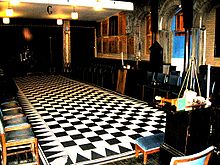 The Masonic Temple at The Cloisters

The Cloisters was commandeered by the Army during the War and suffered damage. By 1948 Miss Lawrence found it increasingly difficult to maintain the building and to repair the damage caused by the Army. She initially offered it to the local Council, who turned it down. Eventually, she offered it to the local Freemasons who accepted it, turning it into the North Hertfordshire Masonic Centre. About sixty Masonic lodges and 'side degrees' meet at The Cloisters, and the centre is run and maintained by an elected Board of Trustees, The Lawrence Cloisters Trust. A Craft Lodge, the 'Cloisters Lodge No 7100' was formed there in 1951 to commemorate Miss Lawrence's generous gift of the building to Hertfordshire Freemasons.[4]

The Cloisters has been designated by Letchworth Garden City Corporation as one of the 'great historic buildings' of North Hertfordshire. It is a Grade II* listed building.[5]

Notable Freemasons at The Cloisters