The Richmond Parkway (officially, since 1997, the Korean War Veterans Parkway) is a Parkway that traverses the South Shore of Staten Island, New York, USA from southwest to northeast. It officially begins at the Outerbridge Crossing toll plaza and ends near the intersection of Richmond Avenue and Arthur Kill Road in the island's Greenridge section, briefly overlapping NY 440 for 0.38 miles (0.61 km) near the western terminus. It opened in 1972 and is designated New York State Route 909C, an unsigned reference route.

The Korean War Veterans Parkway begins concurrent with NY 440 at the Outerbridge Crossing toll plaza east of the New Jersey state line on Staten Island. NY 440 and the parkway remain overlapped to Pleasant Plains,[1] where NY 440 splits from the parkway and heads north on the West Shore Expressway.[2] Past NY 440, the parkway goes under Bloomingdale Road, a road that borders Bloomingdale Park. The Parkway continues east, interchanging southbound with Huguenot Avenue. The road turns to the northeast through the villages of Woodrow and Eltingville. The parkway interchanges with Arden Avenue in Eltingville. The final interchange along the parkway is for Richmond Avenue in Greenridge. The parkway merges into its western service road, which comes to an end at Richmond Avenue.[2] 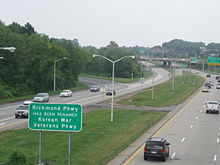 The section of the parkway that exists today represents less than half of the highway that was originally planned.[3] The parkway was supposed to begin in the island's Sunnyside neighborhood, where it was to branch off from the Staten Island Expressway; however, in the late 1960s intense community opposition erupted — much of it from environmentalists — because the parkway's planned route would have bisected the Staten Island Greenbelt and would have caused much condemnation of private property; indeed, Al Deppe's Restaurant, a highly popular establishment resembling Chuck E. Cheese's which had stood at the corner of Richmond Avenue and Arthur Kill Road since 1921, was forced out of business while the arguments raged. The section of the parkway between the proposed Staten Island Expressway interchange and its present terminus ended up never being built, and the route itself, covering 4.8 miles (7.72 km), was subsequently demapped.[3]

The spur that was actually built, which is 4.5 miles (7.24 km) long, was constructed along Drumgoole Rd, and as a result, the parkway's service roads were named Drumgoole Road East and Drumgoole Road West (these roads being named for Father John Drumgoole, the Irish-born founder of the Mission of the Immaculate Virgin, a Roman Catholic orphanage and monastery better known today as Mount Loretto).

From time to time, proposals have been made to revive the aborted section of the parkway, in response to steadily increasing traffic congestion on Staten Island, but none of these proposals has yet to receive significant support from the island's elected officials or residents.[3]

In 1997 the Richmond Parkway was officially renamed the Korean War Veterans Memorial Parkway; however, when signs announcing the change were erected, the word "Memorial" was inadvertently omitted.[3] In any event, the vast majority of Staten Islanders continue to refer to the parkway by its original name.